Home All The News David Luiz hails Arteta’s Arsenal influence: ‘He can improve everyone’ 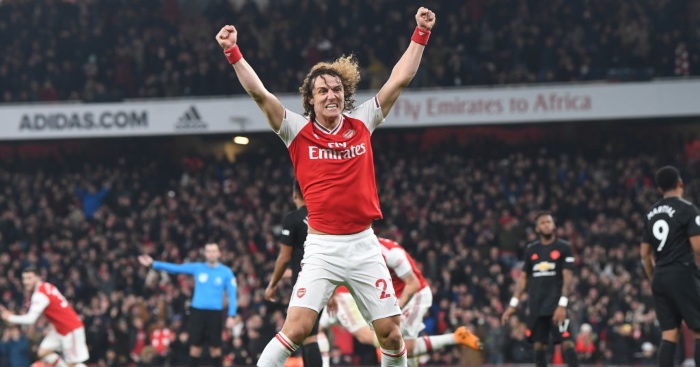 Arsenal defender David Luiz has hailed the influence of new boss Mikel Arteta, insisting they can “do big things” together.

Sokratis Papastathopoulos and Nicolas Pepe scored in the Gunners’ 2-0 win over Manchester United that lifts Arsenal to 10th in the Premier League, four points behind fifth-placed United.

It ended a run of seven home games without victory and was a first success against top-half opposition this term.

“I believe he [Arteta] can improve every player,” said 32-year-old Luiz.

“Mikel is a great coach and knows football. He was a great player, he brings things and I believe in his philosophy.

“We are going to do big things in the future, but step by step.”

After two draws and a defeat since 37-year-old former Manchester City coach Arteta was appointed, an uplifting win was rapturously received by a buoyant crowd at the Emirates.

Although Manchester United were lacklustre, the Gunners were outstanding in the first half as Pepe tore through the opposition defence.

But there were also good displays in midfield from Mesut Ozil – who covered the most ground of all the Arsenal players, running 11.54km – Lucas Torreira and Granit Xhaka, who Arteta claimed would stay at the club despite being linked with Hertha Berlin.

Luiz told BT Sport: “We did a great first half, it was maturity in the second half. We have to be honest and humble to admit physically we are not ready. But where physically you are not there you have to put your hearts in.

“You can’t change from zero to 10 in one day, one week, one month – but it is beautiful to see how these kids start to understand their commitment, their behaviours of what they need to do for big things in life and big things in football.

“In life when you are happy, the results can be totally different. If you sleep happy, you can sleep four hours and better than sleep sad for eight hours. If you work with happiness and believe in what you are doing it is totally different.

“Our season isn’t there. We started very badly, but things can change and there are still some titles to fight for and some improvements for the future.”