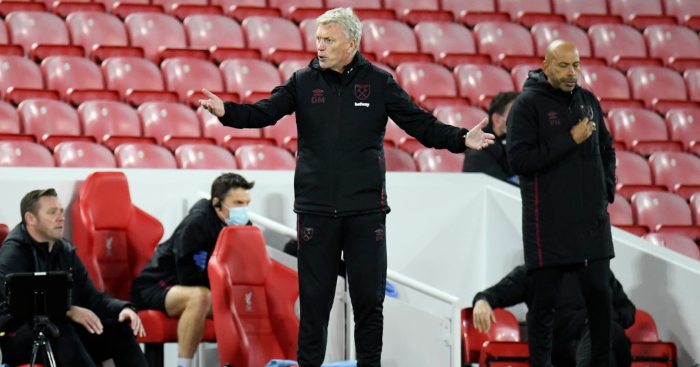 West Ham boss David Moyes has claimed that Liverpool forward Mohamed Salah “dived” to win a penalty in the Reds’ 2-1 win on Saturday.

Liverpool dominated possession but fell behind after a Joe Gomez error allowed Pablo Fornals to strike after 10 minutes.

The hosts equalised with a Salah penalty just before the break and were looking laboured until Diogo Jota, linking with fellow substitute Xherdan Shaqiri, made the difference.

However, Moyes felt Salah had made the most of slight contact by Arthur Masuaku to win the game-levelling penalty.

“It’s not the sort of football I want to be involved in,” Moyes said.

“I think our player stops and throws his arms up because he’s so disappointed about the dive. I’m just disappointed they didn’t turn the decision around.

“Maybe in the second half a decision went for us, but the first-half one didn’t. I am amazed the penalty kick was given for the action in the first half. I really am. I am getting disappointed now.

“Not with the decision but more disappointed that we are allowing those penalty kicks to be accepted. In my books, it is not a penalty.

“We are disappointed. I would not say we were unlucky. ‘One of them went for us as they had a goal disallowed but at 1-0, the penalty was given.”