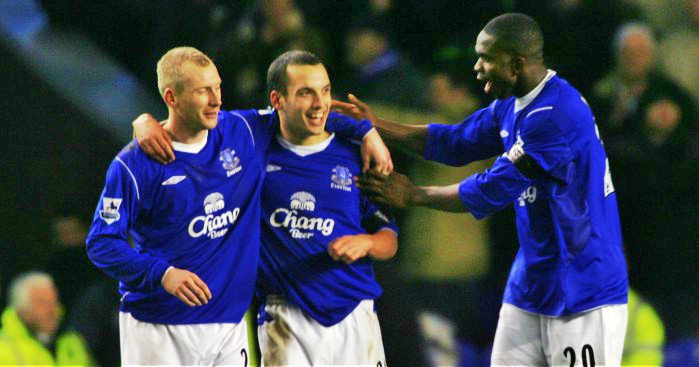 Are any of these lot available in January? Here are the key men for David Moyes in terms of Premier League appearances over the last 15 years…

6) Joseph Yobo (220 PL appearances over eight seasons)
David Moyes’ first signing as Everton manager and probably one of his finest – with a £1m loan fee being increased by a further £4m when the move from Marseille was made permanent. Was eventually sidelined by Moyes but he remains a fan of the Scot, recently tweeting about Everton: ‘It will be great to have to Moyes back at Everton. His understanding of the club and its culture will be pivotal.’
Chances of a reunion? Slim. He retired two years ago. And he’s busy with the former Most Beautiful Girl in Nigeria.

5) Tim Cahill (226 PL appearances over eight seasons)
Probably the best £1.5m that Moyes (or just about anyone else) ever spent, with Cahill scoring 56 Premier League goals in his eight years at Goodison Park. Cahill on Moyes: “In football I have done ok for myself but I have to thank this man for always grounding me and guiding me throughout my career.” Though he did choose China over Moyes’ Real Sociedad when given the option in 2015.
Chances of a reunion? It’s possible. He is still playing after all, even at the age of 37. He will get a lot of knock-downs from the bonce of Andy Carroll.

4) Phil Neville (242 PL appearances over eight seasons)
It does now seem pretty astonishing that the 28-year-old Phil Neville only cost Everton £3.5m. It’s not a lot of money to buy a solid footballer and lifelong loyalty. “People, I think, are disrespectful because of a couple of bad experiences he’s had but he’s still a fantastic coach,” said Neville last week. One of those ‘bad experiences’ involved Phil Neville himself at Manchester United; he probably still thinks they can turn it around.
Chances of a reunion? He has apparently turned down the assistant’s job at West Ham to pursue a managerial career of his own.

3) Tony Hibbert (249 PL appearances over 12 seasons)
A proper one-club man, Tony Hibbert was in Moyes’ first and last squads as Everton manager. Remarkably, Hibbert’s magic even worked on Roberto Martinez, who kept giving him new contracts regardless of whether he was actually playing actual football. “Since David Moyes left, I have noticed the club hasn’t got the same feeling,” said Hibbert when he finally hung up his boots. There’s was a pure kind of love.

Chances of a reunion? Technically he has retired but…

“Hi Bill, has Tony Hibbert changed his number? I need a right back who can add a bit of British steel at the Hammers” pic.twitter.com/6CBwMLBlqX

2) Tim Howard (260 PL appearances over seven seasons)
The less David Moyes spends, the better the player. Tim Howard cost just £3m from Manchester United and he was to remain Everton’s No. 1 throughout Moyes’ time at the club. “David Moyes was brilliant for me, and my hat goes off to him for what he did in his 11 years here. I have a lot of love and respect for David Moyes,” said Howard. When they love him, they love him.
Chances of a reunion? Tim Howard is still the Colorado Rapids goalkeeper and quite possibly still better than Joe Hart.

1) Leon Osman (284 PL appearances over 11 seasons)
‘I’ve read and listened to the criticisms made of David Moyes in the past 48 hours but I don’t recognise the man they are talking about. The man I know is a top operator well capable of thriving at the London Stadium,’ said Leon Osman in this impassioned defence of the manager who gave him the first start of very many at Everton.
Chances of a reunion? At 36, the mind may be willing, but the legs may not.