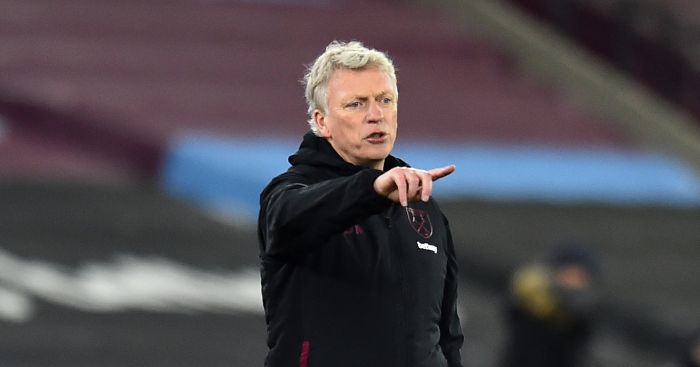 The Hammers have climbed to seventh, just two points behind Liverpool in fourth, despite only having Michail Antonio as their sole senior forward heading into the final week of the January window.

Moyes has been frustrated in the transfer market so far having had a bid for Sevilla’s Youssef En-Nesyri knocked back while interest in Boulaye Dia of Reims, Montpellier’s Gaetan Laborde and Bournemouth’s Joshua King has yet to bear fruit.

MAILBOX: This means Moyes: Top six might be a stretch for Liverpool

Nevertheless, the Hammers boss said: “I hope the higher up the league we go that it makes us a more attractive club for players to come to.

“West Ham is an attractive club and I believe it can become better in the future as well, and I hope that is the case.

“I have no big news on transfers at the moment, nothing has really changed because not only are we in a difficult transfer window, but we are in a really busy time.

“We’ve got game after game so it’s not as if you’re putting as much time and effort into the transfers because obviously, we are concentrating every week on preparing the team, recovering or getting ready for another game.”

Moyes’ attacking options have decreased even further after teenage frontman Mipo Odubeko, who made his debut as a substitute against Stockport in the FA Cup third round, tested positive for Covid-19.

It means Antonio, who this week scored winners against Burnley and West Brom after two months out with a hamstring injury, will be patched up again to face Doncaster in round four on Saturday.

“Mipo had a positive test, but the difference is he has come back and now had a negative test,” added Moyes.

“So we’re a little bit in the dark and we’re waiting on the doctor to tell us what is correct but he has missed the best part of a week’s training so that is where we are with Mipo at the moment.

“We have to think about what we are going to do, but there is also a part of Micky Antonio that needs a rhythm if you look at his best form.

“Sometimes he has looked a little rusty and then he gets into full flow so we want to keep Micky going. I do think that’s the way to get him back up to full fitness.

“He is doing a great job for us because he has come up with two massively important goals in two big games for us.”