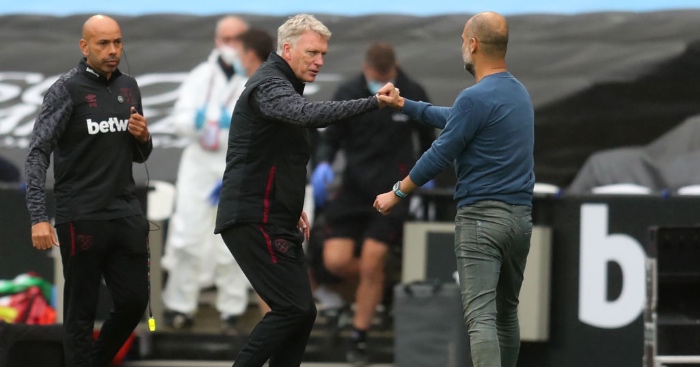 West Ham boss David Moyes has praised forward Michail Antonio for a ‘terrific’ goal and performance during their 1-1 draw with Man City.

Antonio put the Hammers ahead in the first half with a brilliant overhead kick in the box.

West Ham defended well in the second half as City began to find their feet.

Pep Guardiola’s side equalised thanks to youngster Phil Foden in the 51st-minute.

Speaking about Antonio’s goal, Moyes told BBC Sport: “It’s the sort of thing as a kid you always wanted to do, to score an overhead kick. It was a terrific goal.

“He has been great for us, he can run, we can play into him. All good teams need a good centre-forward and we have a good centre forward at the moment.”

When asked about the overall performance, he said: “We could [have led by more than one] but it would have been hard on City because they played well. They are very good with the ball but I felt we could cause them some problems and we got a really good goal.”

Antonio had to be subbed off in the second half after appearing to pull his hamstring. Moyes said about the injury: “I’m hoping it’s not too bad but it’s something we need to be mindful of and maybe we have to give him some rest time as well.”

West Ham have started this campaign well. They’ve already beaten Leicester and Wolves in the league.

When asked about their start to the season, Moyes said: “I’m thrilled with the points total because I don’t think many people would have given us much. We showed real character to stick at it and we’re going in the right direction. We want to get better and I hope we will.”