Man Utd and Liverpool are currently interested in bringing Thiago to the Premier League... 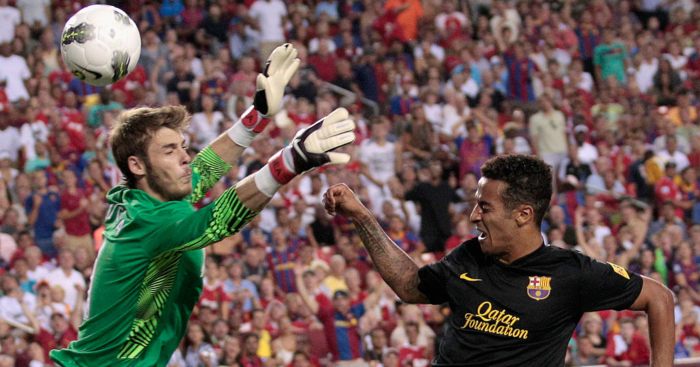 David Moyes pulled out of a deal to sign Thiago Alcantara during his time at Man Utd after a deal had been lined up by Sir Alex Ferguson, according to reports.

Liverpool and the Red Devils are currently understood to be interested in bringing the Spanish midfielder to the Premier League.

Thiago is set to leave Bayern Munich this summer after deciding not to sign a contract extension with the Bundesliga outfit.

FEATURE: Five players Man Utd should sign to challenge for the title

The Champions League winners are loathed to lose the 29-year-old for nothing next summer and are ready to cash in.

And now a report from ESPN claims that Man Utd had a chance to sign Thiago in 2013 but new boss Moyes eventually decided against completing a deal.

At the time Thiago wanted to leave Barcelona because of a lack of playing time and ESPN has revealed that before his retirement Ferguson ‘had set up a £17m transfer for Thiago’.

The ‘final decision on Thiago’ was left to Moyes following his arrival at the club but the Scot ‘held off on sanctioning the move’ after being told that they would make a ‘superstar signing’ that summer.

Moyes eventually ‘pulled the plug on the move for Thiago after telling United he did not know enough about the player’s credentials’ and instead decided to chase a deal for former Arsenal star Cesc Fabregas.

In the end, Moyes signed Marouane Fellaini on deadline day from Everton after a move for Fabregas fell through, and Thiago found himself signing for Bayern.