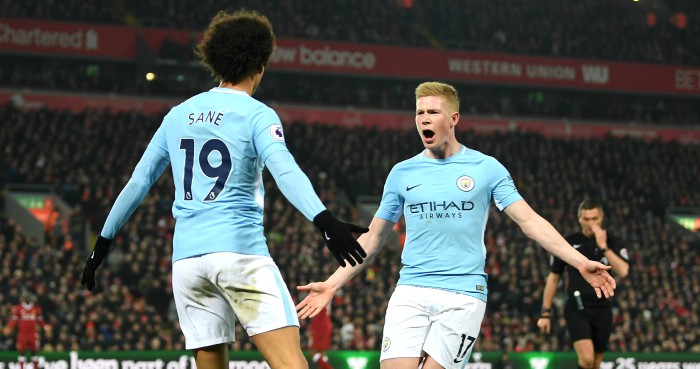 Kevin de Bruyne has dismissed the notion of the famous atmosphere of ‘European nights at Anfield’ causing problems for Manchester City on Wednesday night.

The Belgian was part of the City side who lost 4-3 at Anfield in January, but De Bruyne claims that the crowd is not a factor.

“I don’t think so,” said De Bruyne, when asked by the Daily Mail whether the atmosphere at Anfield is an issue.

“Obviously they have their style of play and to play there is tough.

“But apart from those 10 minutes when we conceded goals last time, we really did okay. It was not the best game we have played, but I don’t think there were lots of periods when they were in control.

“Those 10 minutes, they changed the whole face of the game. If they score, you know it is going to get a bit more heated than if we score! It’s just the way football goes.

“You saw it against Everton at the weekend. They have a good crowd but if you are three goals ahead, then it is really difficult for them to get into it. Let’s hope we can do the same at Anfield.

“Liverpool play the full press, so it will probably be very different from some of our recent games.

“It’s the Champions League, the quarter-final, it is all or nothing. You have two games, so hopefully we will go there, do our thing and have a good game.”

De Bruyne also explained why he should win the Player of the Year award ahead of Mo Salah, which was refreshing.