Home All The News De Bruyne: I thought Sterling was going to be a ‘bit of a d**khead’ 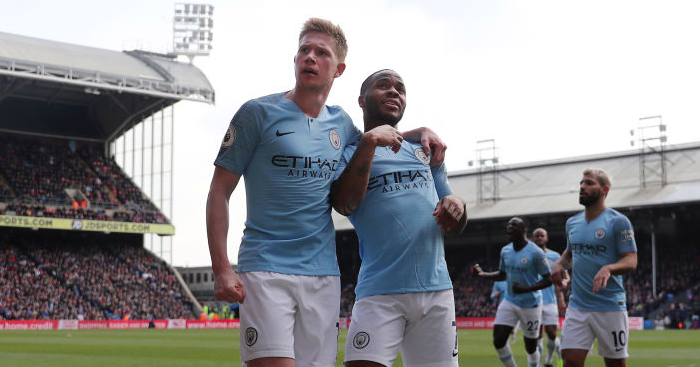 Kevin de Bruyne admits that he thought there was a possibility that Raheem Sterling could have been a “bit of a d**khead” after some “tabloids” built up a negative perception of him.

The England international has been one of the best players in the Premier League and Europe this season with 21 goals and 11 assists in all competitions.

Sterling was subjected to alleged racist abuse during a Premier League match at Chelsea in December and afterwards issued a statement accusing the media of fuelling racism in the way it reports certain stories about black players.

And there has been some criticism about the way the winger has been portrayed in the past with De Bruyne now saying he thought Sterling would be “arrogant” after what he had read about him before joining City.

In a brilliant interview with The Players’ Tribune, De Bruyne opened up about his first impressions of Sterling.

“I didn’t think he’d be a bad guy, really,” De Bruyne said. “But the tabloids were always claiming that he was arrogant. So I guess I thought he’d be … what do the English call it?

“A bit of a dickhead, maybe?

“Raheem and I have this strong connection, because we arrived at City around the same time, and there was a lot of negativity about us in the press. They said I was ‘the Chelsea reject.’ They said Raheem was this flashy guy who left Liverpool for money. They said we were difficult characters.

“Of course, when you read this stuff about yourself, you think, Me? I’m not difficult. This is ridiculous. These people don’t even know me! But honestly, when you read about other players, it influences the way you think. You can’t help it.

“Then I got to City and I actually met Raheem, and we’d talk a bit after training, and I thought, Wait, this guy seems really cool? What’s the story here?

“Truthfully, I don’t have many close friends — inside or outside of football. It takes me a really long time to open up to people. But over time, I got closer to Raheem, because our sons were born around the same time, so they would always play together. I really got to know Raheem, and I recognized what a smart and genuine person he is. He couldn’t be more different from what the tabloids were saying.

“This is the real truth: Raheem is one of the nicest, most humble guys I’ve met in football.

“I said, ‘Honestly? I thought you were going to be really arrogant!’

“And I looked at him like, ‘What? You thought I was going to be weird!’

“It’s a great lesson, I think. In my experience, footballers can be a lot different than you expect, especially if you really get to know them.

“This is definitely true for me as well.”