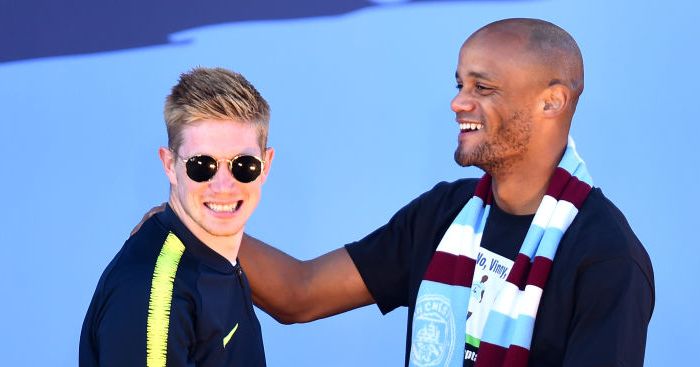 Kevin de Bruyne has revealed that Anderlect is his proposed “next destination” after he leaves Manchester City.

De Bruyne joined City from Wolfsburg in 2015 for around £55m, winning two Premier League titles, one FA Cup and three League Cups since.

The Belgian has established himself as one of England’s best players but is already planning his next move after the Etihad Stadium.

De Bruyne says he has asked former teammate Kompany, now player-manager with Anderlecht, to “keep a place in his team” for him. Which is mightily ambitious, considering Kompany’s start to life in coaching.

“I hope his [Kompany’s] career will be just as amazing at Anderlecht as it was at City,” he told The Sun.

“I’ve told him to keep a place in his team for me in a year, or seven, when I’m finished here.

“If he does do that for me I will already have my next destination lined up; my next job.

“I will definitely miss him being around City.

“At the time City were trying to sign me from Wolfsburg and Vinny was pushing for me to move to Manchester to play alongside him.

“He would constantly ask me when I was coming. He would say, ‘you need to come’, constantly encouraging me to join City.”