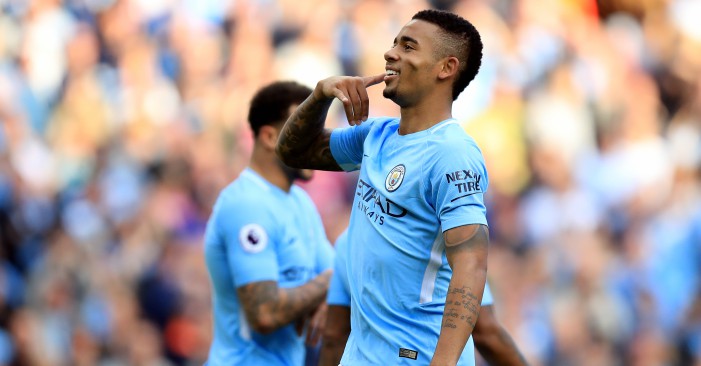 I cannot imagine a better life than watching football videos until 1am on a Monday night so I can be derided and insulted. A crazy week: very few good back-line performances, but so many great ones elsewhere that not only were a bunch left out, but I had to cheat a little bit to get everyone close to their right positions. It really was a last resort, or at least that’s what I’m telling myself. Let’s try a 4-3-3:

Goalkeeper: Mat Ryan (Brighton) While we’ve all been quite rightly marvelling at David De Gea, the Aussie #1 has emerged as a worthy top-flight keeper. He’s smaller than most, but with outstanding reflexes, and his excellent injury-time double save to preserve the draw with Everton made it four quality saves on the afternoon. He’s still not 100% convincing coming off his line – at least once he stayed when the punch might have been a better choice – but he also had one commanding take, which suggests he’s learning. Oh, and his distribution is first-rate. One to watch.

Right-back: Joe Gomez (Liverpool) Received a lot of praise for his efforts against Man United, but actually fortunate to squeeze in here. I went over the video closely, and for roughly the first hour he was below average: he stopped Anthony Martial twice but was cleanly beaten on the dribble twice, and was also beaten once on poor positioning. Despite a few decent passes, he failed to make the most of opportunities getting forward. But he was very good in the last half-hour, with two dangerous crosses and some strong work against Marcus Rashford. On an average day he probably would have received a footnote, but there was no one else in this position, and not enough good centre-half performances to make up a three. Let’s hope for more like that final half-hour.

Mourinho "who got man of the match?"
"Joe Gomez"

"well we must have played not bad then"

Centre-half: Michael Keane (Everton) Not a stormer, but in a thin week, he was good enough. A couple of key blocks, his usual share of aerial duels, mostly reliable clearances. Best of all was his solid covering and/or stepping out of the back line where necessary, not exactly his forte. Used the ball well too. Had to foul a couple of times.

Centre-half: Jonny Evans (West Bromwich Albion) The unwritten rule in this feature is that a centre-half is allowed one big mistake if the performance was otherwise excellent and there’s no one better. Until the 80th minute it was a classic Evans performance: cool and composed, good marking on a key attacker (Jamie Vardy), and those timely step-ins to win the ball. Definitely the best showing of the weekend. And then he not only failed to block a Riyad Mahrez shot, but actually let it go through his legs, and it eluded Boaz Myhill for the equaliser. If you think that automatically disqualifies him, fair enough. But then you also have to disqualify Scott Dann, who was very good but lost Charly Musonda and Eden Hazard in a three-minute span, both errors nearly resulting in goals. And then there was Mamadou Sakho’s late howler. I couldn’t find anyone else who was seriously tested and played very well.

Left-back: José Holebas (Watford) He’s been an in-and-out performer for the Hornets, but produced a very good game against a strong opponent. Got forward with menace several times with some neat exchanges of passes. Made a number of timely interventions, and although was beaten once by Alex Iwobi, otherwise held firm. Was obviously told to play narrow, which gave Iwobi and Hector Bellerin space to cross, but that’s how you do it against Arsenal.

Deep Midfielder: Yohan Cabaye (Crystal Palace) Not the captain, but a captain’s performance. In a high-energy go-for-broke match, he was the leader in midfield. His anticipation (six interceptions) and passing (90%!) were brilliant, and he combined strong pressing with intelligent deep midfield play. Even got into the box to force the own goal. Just a fabulous performance. His teammate Luka Milivojevic was very unfortunate to be left out: he won the ball several times, pressed as well as Cabaye, and belying his reputation as a defensive midfielder, sent a gorgeous through ball for Patrick Van Aanholt. But he had to give way to…

Deep Midfielder: Tom Cleverley (Watford) His stat line is pretty unimpressive. But he was at the centre of the action for large parts of the evening, and seemed to make the right play every time. More impressive in defence than attack, but offered some good touches there as well. And of course the late goal, which was the tiebreaker with Milivojevic. I didn’t dock him for getting beaten by Mertesacker for Arsenal’s goal, because he had no business being assigned to man-mark the BFG. It wasn’t an error, either: he was marking Mertesacker on the next corner too. If you’re a Milivojevic fan (I am) and think that’s unfair, fast-forward your Palace-Chelsea video to the 73rd minute and see Milivojevic also get beaten on a corner, Marcos Alonso forcing a save from Julian Speroni. Both men are worthy of the list, really.

Attacking Midfielder: Kevin De Bruyne (Manchester City) As Einstein put it, Vision + Technique = Genius. I had to laugh at the line in Winners and Losers that Pep Guardiola doesn’t want passes to be more than 10 yards in length. Think he’ll throw back those two second-half assists? A nod to Christian Eriksen, who won the match with his usual class, but didn’t have enough space against a packed Bournemouth defence to produce a masterpiece.

Winger: Raheem Sterling (Manchester City) A coin flip with Leroy Sané, but a few weeks ago he lost out to that same teammate, so let’s reverse it here. They make an interesting contrast: Sané is so much more fluid and instinctive at this point, while Sterling always seems to be overthinking things. But Guardiola has him on the right path, as evidenced here by some intelligent passing and a cool finish. Still a work in progress, but still (is it possible?) only 22.

Raheem Sterling has the same amount of league goals as Harry Kane. #justsayin

Winger: Wilfried Zaha (Crystal Palace) And here’s the cheat. He played at striker, not winger, but if he goes as a striker in a 4-4-2, De Bruyne has to be a wing midfielder and Sterling has to be a wing midfielder rather than a winger. Pick your poison. But it’s not as bad as it looks, because Zaha played almost the entire match in the channels rather than through the middle. The goal, too, came from a typical incursion from the wing. But either way, a relentless performance. Go read Ian Watson’s excellent Early Winner column for more. And don’t forget Richarlison, who in another week would have had his own paragraph.

Striker: Gabriel Jesus (Manchester City) Oh, boy. This guy fits the Guardiola attack like an extremely tight-fitting thing. I love watching him come back to get the ball and distribute quickly. And then there’s the intricate passing in the area. And the instinctive runs. And the deadly finishes. It was all on display against Stoke.

And now for a paragraph on Tammy Abraham of Swansea. I was positive he’d make the list, with Jesus left out, but I watched both games again, and it was no contest. Without a decent supporting cast, Abraham just wasn’t as involved, and because he was so isolated, he forced things when he got the ball. But even so, it was a fine showing. He’s pretty much a traditional centre-forward: strong, a good header, with the smarts to get goal-side of his man. Not the best dribbler, but good at passing combinations if he has the help. He scored two right-place-right-time goals, and his best moment came when he lost his man by heading the ball to himself and whacked a cross-shot that Jonas Lössl saved brilliantly. He’s six months younger than Jesus, by the way.