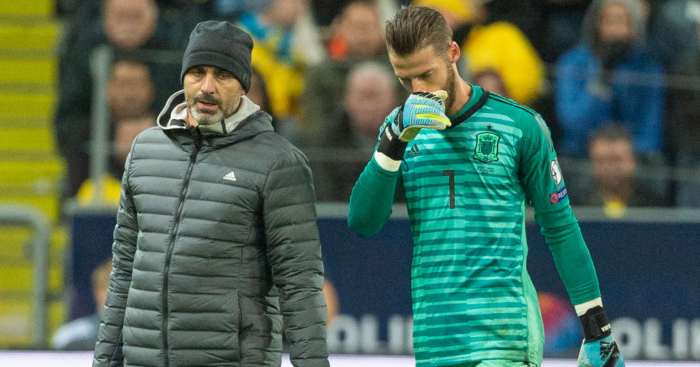 David De Gea received treatment for an injury at half-time during Spain’s 1-1 draw in Sweden before aggravating the problem and withdrawing in the second half, according to Spain boss Robert Moreno.

The goalkeeper was eventually forced off after an hour at the Friends Arena in Stockholm and could now face being ruled out of Manchester United’s Premier League clash with Liverpool on Sunday.

De Gea hobbled out of the Euro 2020 qualifier following an innocuous-looking incident, having immediately grabbed the back of his thigh after clearing a back pass from his own player.

He sat on the ground in his six-yard box before making his own way off the pitch accompanied by the Spanish medical team.

United boss Ole Gunnar Solskjaer will be hoping the injury is not serious, with a crunch clash against leaders Liverpool at Old Trafford just five days away.

Asked about the injury in his post-match press conference, Moreno said: “He had pain in the abductor muscle but he received treatment at half-time and wanted to keep playing. He gave us his word, but in the end he couldn’t continue.”

Spain were behind at the time of De Gea’s departure thanks to Marcus Berg’s goal 10 minutes earlier but substitute Rodrigo poked home from close range in stoppage time to seal the point that Spain needed to confirm their place at Euro 2020.

After ensuring qualification for next summer’s finals, Moreno said: “It is a draw but it tastes like a victory for us, and probably a defeat for Sweden.

“I am happy with the team’s game and with the players. It was a difficult game against a rival that eliminated great teams in the World Cup. We are very happy.

“When you become a high-level team like Spain, it is an obligation to qualify. I want to remember (former manager) Luis Enrique and his family and dedicate this qualification to them also.”

In June Enrique stepped down as coach of the Spanish national team after less than a year in charge to be with his terminally ill daughter.