Home Manchester United News De Gea: I am happy and I feel loved 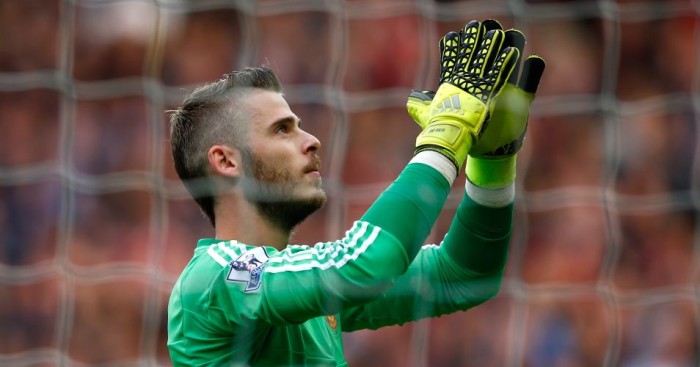 David De Gea is “really happy” at Manchester United and has thanked manager Louis van Gaal and the fans for helping him settle back in after the dramatic collapse of his move to Real Madrid.

The 25-year-old Spain goalkeeper was left out of United’s team by Van Gaal at the start of the season ahead of an anticipated return to Spain, but the deal fell apart in the final moments of the transfer window.

De Gea’s future was initially uncertain but Van Gaal reinstated him and he has signed a new United contract which runs until 2019.

Although reports suggest that new deal contains a release clause which could be triggered by Madrid in the future – and reports say they will be back next summer – De Gea has insisted he is enjoying life at Old Trafford.

“I felt in that moment that to extend my contract was the best thing to do,” he said on ESPN Deportes.

“I’m really happy now, at one of the biggest clubs in the world, where I feel loved by the fans.

“Nobody let me down or disappointed me – these are things that happen. You must look forward, and I am very happy now.

“During the market anything can happen, it can all change inside a minute. Football is like that. There were difficult moments, strange moments, but they help you to mature. To be stronger.”

De Gea described Van Gaal as “hard and strong” but also a “joker”, and said he had a normal relationship with the manager despite his near exit.

“From the first I day I came back, after all that happened, he gave me a lot of confidence, told me I would play, to relax and keep doing what I had done before,” he said. “He is a joker, makes a lot of jokes. Now and again likes to do something so that there is a good mood. But we talk mostly about football.”

De Gea also thanked United’s fans for helping him settle back in to the first team.

“The first game I returned, after all that had happened, was impressive,” he said. “The way Old Trafford received me, it made the hairs stand up. It’s very difficult to describe what that day was like. I really appreciate it.”