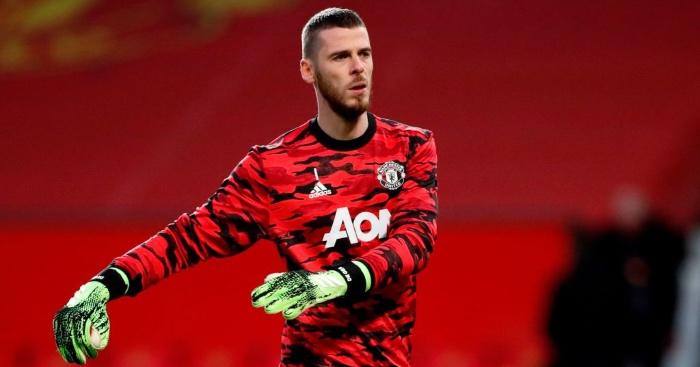 David De Gea is excited about Manchester United’s progress and feels confident between the sticks as Ole Gunnar Solskjaer’s side head into 2021 in the Premier League title race.

A topsy-turvy year that started with poor results and fan discontent ended with the improving Red Devils bringing the curtain down on 2020 with a last-gasp win against Wolves in front of empty stands.

Prick of the Week No. 15: Leeds Twitter and the Carney Code

Solskjaer’s men have won seven of their last nine top-flight matches, with long-serving De Gea delighted by the way things are going heading into the new year.

“I think we have now a winning mentality and this is very important for the team,” he told the PA news agency. “All of us we want to win, we keep trying until the end.

“The manager wants us to try until the end. It was great to see the team trying to score until the last minute and then we scored a goal so it’s perfect for us.

“At the moment we feel very strong, very confident so now we have to start 2021 like we finished this year – with confidence, strong, with a winning mentality and game by game like we play a (cup) final every game so let’s go for it.”

Put to De Gea there appears to be a growing belief in the dressing room about a title push this term, the goalkeeper – part of the last Premier League triumph in 2013 – said: “Of course, I think there’s belief.

“You have to believe, keep believing all the time but at the same time we have to be calm because this is a long way to finish, many games to come.

De Gea spoke after the Wolves win with the kind of confidence and authority he displayed on the field on Tuesday night.

The 30-year-old pulled off some important saves at key moments and looks to have emerged from a shaky period in which his place as United’s number one was questioned.

“I feel very confident, to be honest,” said De Gea, who has faced fresh competition from Dean Henderson this season.

“I feel well. I am happy every time I can help the team like today, make some big saves to keep the clean sheets.”

It was not all good for De Gea on Tuesday, though, as he needed treatment after running into Spain team-mate Adama Traore.

“Woof! I was lying on the pitch,” he said with a laugh.

“He’s one of the strongest players in the Premier League, so it was very painful in my arm, in my stomach, but it was fine. We win the game, so everything’s fine.

“I feel very well. It was just when I hit Traore it was painful, I can’t breathe, but it was fine.”

While United celebrated their late triumph, Nuno Espirito Santo’s injury-hit Wolves were ruing what could have been.

But there were positives to take from Tuesday’s loss, including Ki-Jana Hoever’s impressive first Premier League start.

“It hurts really bad,” the 18-year-old said. “In the beginning of the match we played some good football, some good counter-attacks.

“I think at the end of the half, they were having the ball a bit more and we were compact as a team and we defended well.

“In the second half, it was a bit more of the same, we started well and then at the end, they had more of the possession and we couldn’t really hold the ball, and then it’s painful that they score in the last minute.

“At the end I feel disappointed that we didn’t get one point, so I’m not really happy at the moment, but I’m proud that I started today.”