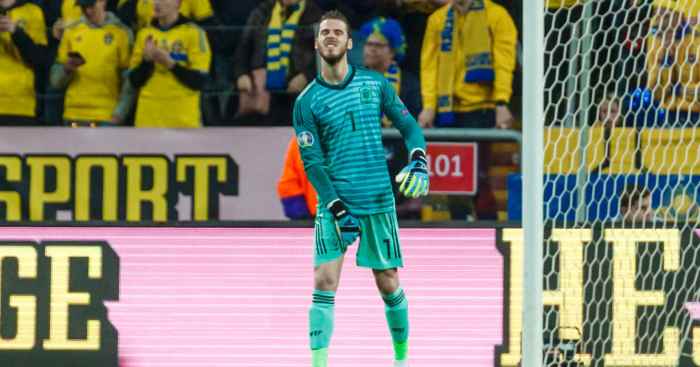 It seems very likely that David de Gea will miss Manchester United’s clash against Liverpool on Sunday, although his injury is not understood to be serious.

The Spanish stopper is due to arrive back in Manchester on Wednesday afternoon for a full assessment on the abductor muscle strain he sustained while on duty for Spain in Sweden on Tuesday evening.

The goalkeeper was eventually forced off after an hour at the Friends Arena in Stockholm and could now face being ruled out of Manchester United’s Premier League clash with Liverpool on Sunday – a match vital for both sides, but perhaps more so for United with the team just two points clear of the relegation zone and manager Ole Gunnar Solskjaer under increasing pressure.

De Gea hobbled out of the Euro 2020 qualifier following an innocuous-looking incident, having immediately grabbed his the back of his thigh after clearing a back pass from his own player.

He sat on the ground in his six-yard box before making his own way off the pitch accompanied by the Spanish medical team.

According to the Daily Mirror, however, the early indications are that he has not suffered a serious injury – but he’s unlikely to feature this weekend against Jurgen Klopp’s 100% visitors, while he also seems likely to sit out United’s next few fixtures too.

The report says ‘a groin strain, rather than a full muscle tear, could see De Gea sidelined for several weeks, ruling him out of Sunday’s visit of league leaders Liverpool, as well as next week’s Europa League tie away to Partizan Belgrade, the Premier League trip to Norwich and United’s EFL Cup tie away to Chelsea’ the following midweek – meaning a minimum two-week absence for the keeper.

De Gea’s absence will mean Sergio Romero deputising in goal and while the Argentine is more than capable, the loss of De Gea will prove another untimely blow for United who already have injury doubts over several stars.

Asked about the injury in his post-match press conference, Robert Moreno said: “He had pain in the abductor muscle but he received treatment at half-time and wanted to keep playing. He gave us his word, but in the end he couldn’t continue.”