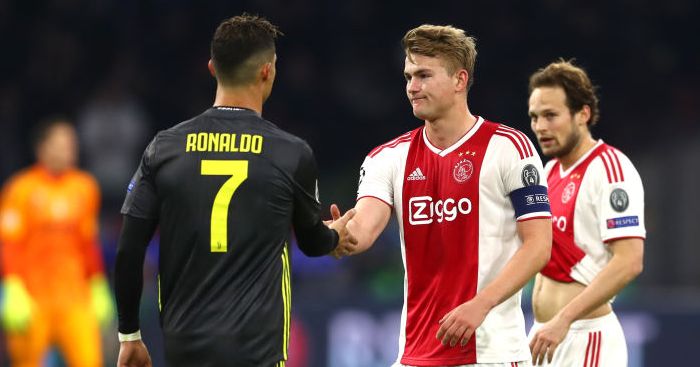 Matthijs De Ligt does not know what colour shirt he will be wearing next season, with the highly rated Ajax teenager planning to mull over his options during the post-season break.

Barcelona, Manchester United, Liverpool and Paris St Germain (eurgh) have all been strongly linked with the 19-year-old, who has impressed so much for club and country this season.

It certainly appears a case of when rather than if De Ligt leaves Amsterdam, but the centre-back is in no rush to make his decision after ending the season with a 1-0 defeat for Holland in the Nations League final to hosts Portugal.

Asked what colour shirt he would be wearing next season, he said: “I don’t know. I don’t know.

“Now I am going on vacation and I just take a rest, relax and then I will see.

“When you rest you have enough time to think, so that’s good.”

It has been claimed that the United hierarchy have long expected De Ligt to join Barcelona, where Ajax team-mate Frenkie De Jong has already agreed to move.

Cristiano Ronaldo asked the teenager if he was joining Juventus after Sunday’s final, while Liverpool and Manchester City have also been mentioned as possible destinations for one of the stars of Ajax’s run to the Champions League semi-finals.

“That could well be true,” De Ligt told NOS when asked whether Ronaldo had implored him to move to Turin.

“I didn’t understand him at first. I was a little shocked. That’s why I laughed.

“What I answered? I didn’t understand him at first. So I said… no, I didn’t say anything.”

Styled that one out, didn’t he?