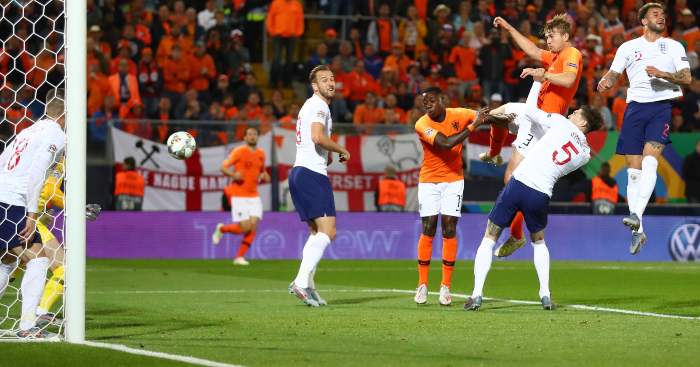 Matthijs De Ligt has spoken of his determination to atone for his ‘very silly’ mistake which handed England their lead in the Nations League semi-final on Thursday night.

The Holland defender was caught in possession by Marcus Rashford, who went down under De Ligt’s desperate challenge to earn the Three Lions a penalty.

Rashford converted the spot-kick, but England surrendered their advantage when De Ligt escaped John Stones to head in a second-half equaliser.

Stones then gifted Holland the lead in extra-time before another mix-up in possession presented Quincy Promes with the chance to kill off England with six minutes remaining.

De Ligt accepts he made a needless error but the Ajax captain, who could be heading for PSG, satisfied his desire to make up for an uncharacteristic mistake.

“The penalty action was very silly and I know it very well,” he admitted after the match in Guimaraes.

“I received a ball from De Roon and my intention was to play the ball with Cillessen, but I was late, it was very stupid, because I should not have sent the ball to the goalkeeper.

“I’m very demanding with myself and I had to compensate that error.”