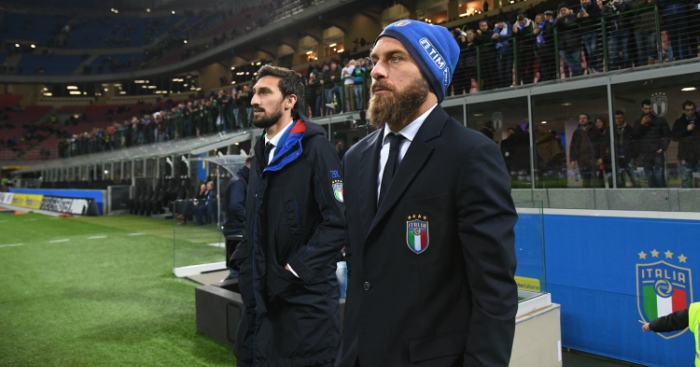 De Rossi remonstrated with a member of Ventura’s coaching staff during Italy’s 0-0 draw with Sweden, a result which means Italy are unable to qualify for the 2018 World Cup.

As the game wore on De Rossi, a defensive midfielder, was asked to warm up, but instead got into a heated debate.

The Roma stalwart pointed towards striker Lorenzo Insigne, asking why he was not being brought on as Italy needed a goal to draw level on aggregate.

De Rossi was in fact not brought on, but Italy still fell short of the requirements.

De Rossi: “Why the f*** would I come on? We need a win not a draw" then he points towards Insigne 😳 pic.twitter.com/gr5WKrJZce

“We have this tendency to warm up three at a time, then after five minutes we change and another three go,” De Rossi explained post-match.

“I just said we were near the end and had to win, so send the strikers to warm up. I pointed to Insigne too.

“It wasn’t up to me whether it was a tactical issue. I’m sorry if I offended anyone. At the time I just thought perhaps it was better that Insigne come on instead.”