"It’s not about today’s game, it’s a year of not being good enough." 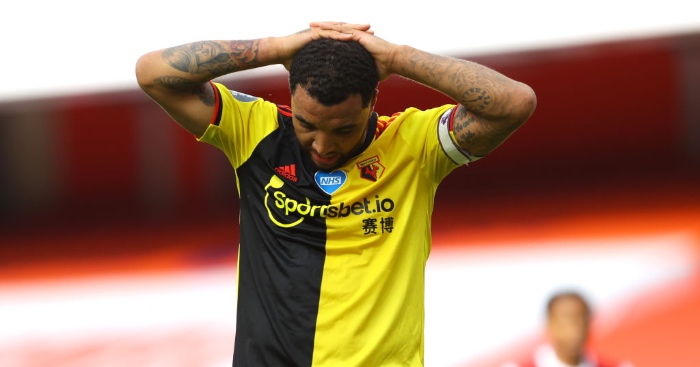 Troy Deeney never beats around the bush, and he was no different in interview after Watford’s 3-2 defeat to Arsenal confirmed their relegation from the Premier League.

Enough from us, here’s Mr Watford.

Deeney said: “It’s not about today’s game, it’s a year of not being good enough. We can be frustrated with today but if we can’t defend as a team you’re going to lose more games than you win. But it’s worse for the fans and those who work at the club they’re the ones that might lose their jobs and it isn’t fair on them.

“The club from top to bottom will need to do an audit. Because sacking three managers in one season means we haven’t got it right. Something went wrong, is that managers, is that players is it ownership? We need to audit that and go through it all to see what went wrong.

“One thing I’m certainly not going to do is come out here and make excuses, we just haven’t been good enough basically.

“I’m 32 years old, I’ve a knee operation next week because I’ve been playing injured for the last month. I honestly don’t know if this is going to be my last game at Watford or in the Premier League. I don’t know, it’s too early to talk about that and it’s not about me it’s about the people at the club who work at the club and will be affected. I’ll take a few days away, assess and take some grief online no doubt.

“But you know if I do ultimately stop playing for Watford as of now I’ve had a great run, next week or the week after is going to be 10 years at this club. That don’t happen often, I think the whole country has had enough of Covid and I’m right in that. Basicallly I’m going to go and get my knee sorted and go and spend some time with my family and at the end of the day they’re the only people whose opinions I care about. If someone wants to give me grief online then please do it. I’m a big boy with big shoulders and I’ve had some real world issues so getting some stick online doesn’t bother me.

“I have had my say in the dressing room trying to be as positive and as real as I can be, players come and go fans and clubs and legacies will be there a lot longer than us. The bigger picture is the club, the people whose jobs are here and how we can safeguard those. I’m sorry if I didn’t answer your question but I don’t want to make it about me or the other players, we know we haven’t been good enough the table reflects that. But it’s all about re-building and if this is my last game for the club I’ve had a good run. Highest of highs and lowest of the lows, this will be the lowest one yet.”