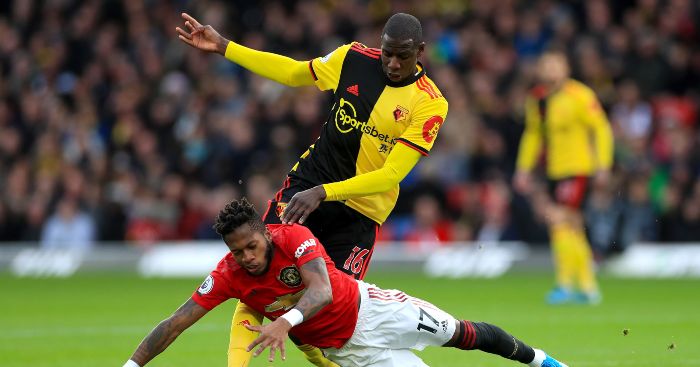 Troy Deeney has claimed that Watford targeted Fred when playing Manchester United because “he doesn’t know how to do one or two touches”.

Fred has faced Watford on two occasions, both of which came during the 2019/20 Premier League season.

The Hornets secured a 2-0 win at Vicarage Road in December 2019 with Fred playing the full 90 minutes, while he was substituted late on in a Manchester United victory at Old Trafford the following February.

Deeney was captain both times, scoring in the first game, and says Watford used Fred as their “trigger”.

“Whenever you play against Fred – we certainly did it – you let him get it because he has to take three or four touches,” he told talkSPORT.

“He doesn’t know how to do one or two touches.

“Anyone that watches his game, he gets it facing the wrong way, turns, turns, chops, chops and he’ll give you the ball three or four times a game.

“If you’re anyone who studies football you’ll know that, when teams are setting and they’re waiting, you go and that one person is the trigger.

“You’re waiting for it to go and then you bounce off him.”

Fred has established himself as a key player under Ole Gunnar Solskjaer once more, starting against both Newcastle and PSG this past week.

The Manchester United manager paid tribute to both the Brazilian and midfield partner Scott McTominay for their professional performances.