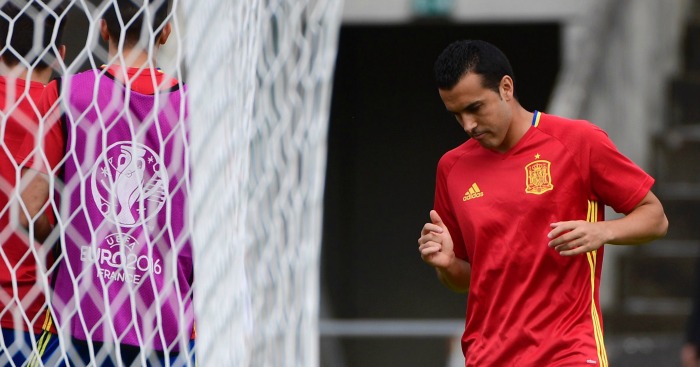 Spain head coach Vicente del Bosque sees no reason to reprimand winger Pedro following his complaints at having to sit on the bench at Euro 2016.

The Chelsea forward has played less than 10 minutes so far in the tournament, his only appearance being as a late substitute in La Roja’s opening 1-0 win over the Czech Republic.

In an interview with Movistar, former Barcelona player Pedro had claimed “it is not worth me turning up just to be part of the group”, with Del Bosque having so far shown a preference for Nolito and David Silva on the flanks.

However, as he prepared his squad for their final Group D match against Croatia in Bordeaux – with Spain already secure of qualification for the last 16, although not top spot – Del Bosque looked to play down any suggestions of an unsettled camp.

“What he has said, he did not disrespect anyone. I think his conscience got the better of him a little bit and he just showed a reality of what the 12 players who are not playing all feel,” Del Bosque told a UEFA media conference.

“Pedro was a bit angry he is not playing, that is inevitable and can happen.

“We try to get on well with everyone and for everybody to be happy and comfortable.

“However, it is inevitable that in certain moments with those 12 players who are not playing there will be a bit of discrepancy, that is what happened and I don’t think there is anything more to it than that.

“All the news here has been positive so when something negative comes out it is blown out proportion a bit, but I don’t think it will have a lot of repercussions.”

Chelsea forward Pedro, who joined the Blues from Barcelona last summer, is one of the most experienced players in the Spain squad, having won 58 caps and scored 17 goals since making his debut in May 2010.

Del Bosque added: “I don’t think we should be too hard on him, and in the 50-plus games he has been here with us, he has been a very correct player.”

Focus will again be on crowd behaviour inside Nouveau Stade de Bordeaux after the Croatian Football Federation was fined 100,000 Euros (£77,000) for incidents including the use of fireworks and racist behaviour of supporters during the 2-2 draw with the Czech Republic in Saint-Etienne on Friday.

Del Bosque, though, feels none of that should distract from the efforts of the players on the pitch, with first place in the group and so a better seeding for the knockout stages at stake.

“Croatia are one of the best teams I have seen in this competition.

“It is going to be an open game, we will both go for the win – you can’t think about anything else.”

Pedro used Monday’s scheduled pre-match press conference to tackle the issues over his comments head on.

The 28-year-old said: “I am not sorry exactly. If you asked me about my future in the national team, I would say the same (again).

“I am very grateful to be here and be part of this team. I have been here for six years, I am not attacking the manager or other things that have been said.

“I assume the responsibility of what I have said, if I have to say sorry to someone because I haven’t liked it, I will say it.

“Now the most important thing is to be calm.”

Pedro added: “I wanted to come out and speak here and I will say it again – if I have annoyed anyone or made anyone disappointed I am sorry, but I don’t think it was such a big deal.

“I always want to be involved on the pitch, so I am going to keep working hard to try to play and be in the best possible shape to help the team.”