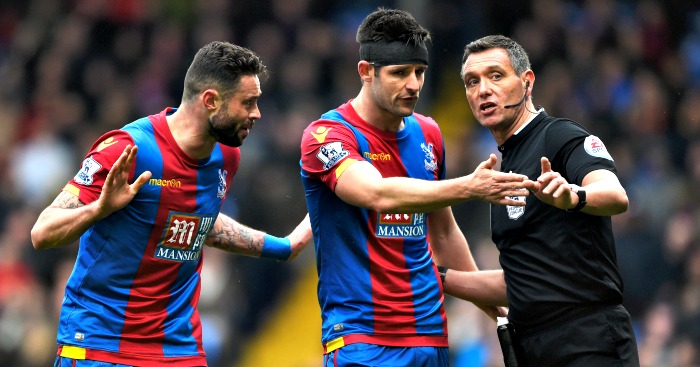 Reds striker Christian Benteke went down under Delaney’s challenge deep in injury time and converted the resulting spot-kick to secure a 2-1 win for Liverpool at Selhurst Park.

Replays showed Delaney pulled his left foot away before making any contact, only to clip Benteke with his right knee as he slid through.

Palace manager Alan Pardew was furious after the game and blasted Benteke for what he saw as a dive.

“That touch doesn’t warrant the dive he makes, and it’s the dive that makes the linesman’s mind up. It’s a worrying issue in the game,” he said.

“If you’re the referee and see the centre-half pulling out of the challenge, you don’t give the penalty. And I don’t think he did. The linesman assumes that little touch is a penalty.”

Republic of Ireland international Delaney addressed the issue on Instagram later in the evening.

He wrote: ‘I can honestly say I didn’t make contact with Benteke today and IF there was slight contact I didn’t impede him and certainly didn’t feel there was enough to award a penalty in the 96th min…If a penalty is awarded that late it has to be unequivocal.

‘I waited over an hour to speak with the officials and in fairness to Andre Marriner he said he didn’t think it was a penalty but he trusted his linesman that much he awarded it.

‘With the way the game was ref’d and the physicality of both teams it was unbelievably harsh. With how Wilfred (Zaha) and Yannick (Bolasie) were man handled by Liverpool players over the course of the game, which I’ve no problem with, it was a really tough decision to take so late.

‘All I can do is swallow it and hope to put this right.’

Palace had led through Joe Ledley, but goalkeeper Alex McCarthy’s error gifted Roberto Firmino an equaliser before the late drama.