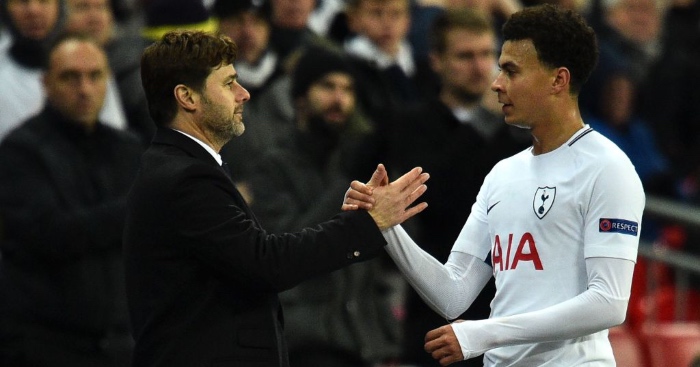 Tottenham midfielder Dele Alli has been backed to make a £30 million move to Man Utd and reunite with former manager Mauricio Pochettino.

His former boss in North London, Pochettino, has been linked with the Old Trafford hot seat to replace Ole Gunnar Solskjaer.

FEATURE: If you say RVN was just a tap-in merchant we can’t be friends

Speaking on Talksport (via the Daily Star), host Adrian Durham backed Alli and Pochettino to reunite in Manchester.

He said: “Now has come the time to break the ties with Tottenham Hotspur and move on for a different challenge, wherever that may be.

“If there is a vacancy at Man Utd and Pochettino gets the job, I can see him taking Dele Alli there and revitalising him.

“Dele Alli has had his football heart broken by Jose Mourinho.

“What Jose needs to do to take Tottenham where he wants to go, there will be collateral damage along the way. And Dele Alli is part of that.

“So Dele Alli now has to sit down and look at himself and say, ‘hang on a minute, I have been, in my time, one of the Premier League’s better players. For a couple of seasons I was magnificent, and I want to get back to that. So I need to seek a move’.

“Whether that is abroad or to another Premier League club, clearly Mourinho doesn’t want him, so he won’t care where he goes.”

Alli has previously been linked with a host of top clubs, including PSG and Real Madrid.

But he has seen his playing time reduced under Mourinho and is now on the verge of leaving.

The club has previously been told to loan Alli out in January. This would give the England international a chance to rediscover his form.

Spurs’ next match is against West Brom on Sunday in the Premier League.