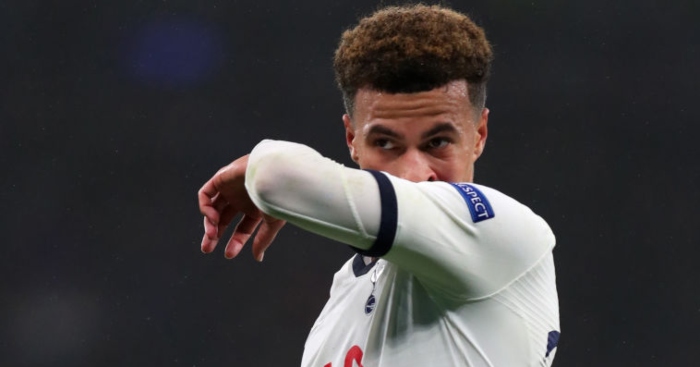 Dele Alli’s representatives are in full-on PR mode. As the senior England players were reporting for international duty at St George’s Park, they were letting it be known that their client has hired his own private nutritionist.

The intention – in the week after Alli wasn’t picked as part of that squad – was to head off any suggestions that he isn’t taking his career seriously enough. Unfortunately, the effect has been to pose another question.

Really, he didn’t have a nutritionist already?

Alongside this strict new diet, Alli has also taken up yoga in an attempt to alleviate the repetitive muscle injuries which have been plaguing him since the last World Cup. He has also, according to several articles which sound suspiciously like press releases, greatly reduced his commercial commitments.

Which is all fine, sensible in fact, but – again – it focuses attention on lingering suspicions that Alli isn’t particularly well-directed and that there are aspects of his life which could be more conducive to stronger performances on the pitch.

Until 2017, Alli had been represented by the agent Rob Segal. When his contract with Segal ended, he moved to the Creative Artists Agency, with the provision that Harry Hickford, his 23-year-old best friend and the son of the family with whom he lived from the age of 13, should look after his day-to-day management. And if that doesn’t sound like an Entourage episode waiting to happen, then what does?

But it still only effects his life when he isn’t under Tottenham’s care. This might be overly instructed by just how negative everything at Spurs is right now, but Alli can credibly be portrayed as one of the great victims of their last few years. Or, to be more precise, the player upon whom the stress of these recent seasons seems to be showing most clearly.

Between 2015 and 2018, Alli played over 150 senior games. One of the reasons behind Tottenham’s current state is their over-reliance upon a small group of players and, most likely, the effects of cumulative fatigue striking simultaneously. Alli’s workload hasn’t been extraordinary by modern standards, but given the way Spurs have played over that period and the intensity demanded by Pochettino, his muscles could certainly do with a long rinse.

A further issue for him, though, has been the way his role has been tweaked and tailored across that period. Most supporters would agree that he’s at his best as a deep forward, shadowing Harry Kane and dropping deep into the interplay between Christian Eriksen and Son Heung-Min. Unfortunately, the issues which have plagued the team’s midfield – the gradual decline and eventual departure of Mousa Dembele, and the injury issues afflicting Eric Dier, Victor Wanyama and occasionally Harry Winks – have meant that his optimal role has rarely been available.

At the beginning of his Tottenham career, Alli was a relatively free player. As the squad around him has weakened, though, and others have regressed from their own physical peak, the burden has changed. Tactically, when he is fit and available, Alli looks much more inhibited, rarely inhabiting the kind of positions from which he used to be so influential. That doesn’t always jump out from the teamsheet, but it is apparent in the way he plays, in the compromises within his game. At times it’s been a necessity; he’s had to play slightly deeper because, owing to the transfer inertia, there’s been nobody else.

That isn’t to excuse him personal responsibility. He has never quite lost the ability to vanish from games for long periods of time and, even now, hundreds of games into his career, he has the occasional habit of playing self-indulgently, with too many flicks and tricks, and not enough substance. There have been plenty of occasions also when, having been asked to play a different role and clearly possessing the ability to do it, he has badly underperformed.

But the overall picture isn’t particularly healthy, with the outstanding moments – which he used to compile with such ease and regularity – now occurring months apart. But it’s a situation which is drawing its energy from more than one source.

One of the theories about Alli is that he’s never actually been that good and that this has really just been regression to the mean. It’s a line of attack which portrays him as an English embellishment and as a strain of that disease which turns our ordinary players into superstars.

But that’s not fair. It’s an over-compensation for the past. Alli probably isn’t quite as special as we once thought, but he remains a rare player with an unusually broad skill-set. He scores tap-ins, volleys and thumping headers, he sees passes that many other players don’t, and he can pass through a defender like a beam of refracted light. He just isn’t doing any of those things at the moment.

But that doesn’t make the situation irretrievable. Some of his issues over the past 18 months can be attributed to bad luck, certainly his injuries and the effect of Spurs’ shortcomings, but this malaise also seems descriptive of extra-curricular drag. Baggage and weight; an overall shape which isn’t as aerodynamic as it might be.

But at 23 it’s not too late to correct that. And maybe, to apply a slightly contrived perspective, it’s good that this situation has reached a head now, when Alli is still young enough to be pliable and his habits can be fixed. It’s easy to be cynical about the nutritionist, but it’s still a sensible step to take. The decision to reduce commercial commitments is also very obviously a position adopted for the message it sends. But that, too, is potentially of great benefit.

The impression is of a career which might have been in crisis. In time, though, hopefully this flurry of activity will represent a penny dropping and we will see Tottenham, Alli’s representatives and the player himself understanding the need to take slightly more care.