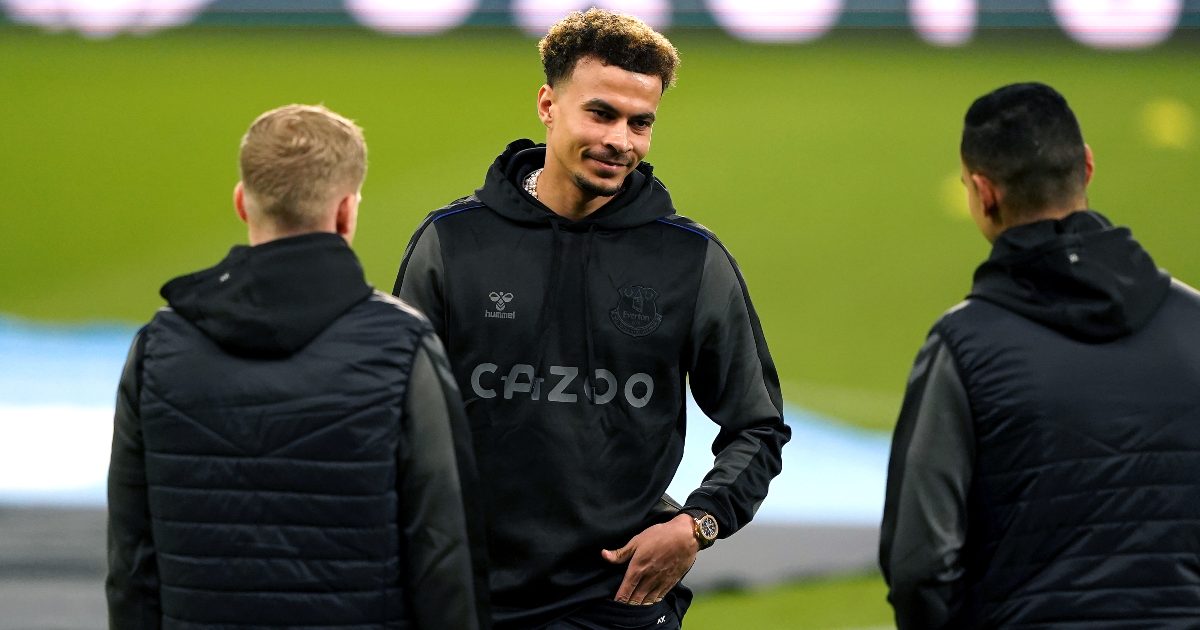 There has been much deserved condemnation for some players who have done truly harrowing things.

And yet in the middle of all this, there have still been those who’ve found time to criticise Dele Alli for the car he drives and the clothes he wears.

We’ve been here plenty of times before of course, with Dele and other young, very often black, players – judged by old white men for the most trivial of non-offences.

Some Everton fans experiencing these bizarre conversations around Dele for the first time first-hand have been quick to detect an anti-Toffee bias in the reporting. It’s understandable, because the attacks are so personal and so absurd that the total absence of logic within them makes that a tempting road to go down. But this is nothing new. It’s worth remembering that even towards the end of Mauricio Pochettino’s reign at Spurs, Dele was so often the target of criticism that when Jose Mourinho came in he targeted the “f***ing lazy guy” for an easy win as his first pet project. Like everything else Mourinho did at Spurs, it worked quite well for a few weeks before turning all to sh*t.

No, this has nothing to do with Everton specifically. They just happen to be the club where weird Dele coverage is now centred.

I know there’s a powerful argument for just ignoring talkSPORT because it’s talkSPORT and they don’t even know how capital letters work, never mind anything else, but it’s the same argument as just ignoring The Sun because they specialise in nonsense. People listen to and read this nonsense. They take it in and it feeds opinions. It matters.

Over to the ever-thoughtful and measured Alan Brazil, who announced that Dele turning up to Everton training in a Rolls-Royce “didn’t annoy” him, before being performatively annoyed by it for an extended period of time. “I want to see the guy playing his football again. Maybe I’m old-fashioned but he turns up in his Rolls Royce and I’m like ‘ah no Dele, don’t do that.’ Little signals like that to me… Am I wrong?” Yes. Yes you are.

This isn’t even some 17-year-old spaffing his money before he’s “proven himself” in the eyes of old pros. That’s a weird enough flex but somehow slightly easier to understand. And it’s like that already flawed logic has extended to Dele because he’s had a tricky couple of years. This is a 25-year-old who has been a very, very successful and impressive professional footballer, earning large amounts of money in the process and spending some of it on cars that are his and that he drives to places he needs to go. What’s he supposed to do? Acknowledge that his last couple of years haven’t gone as he or anyone hoped and just trade in his Rolls Royce for a 1997 Metro as some kind of penance?

And this stuff about “just wanting to see him play football” would be far easier to take in good faith if this conversation hadn’t taken place before a single Everton match for which Dele was available to play football.

Perhaps even more disappointing was Glenn Hoddle’s disgruntlement at the clothes Dele wore when presented to the Everton fans during the FA Cup clash with Brentford. He was wearing casual clothes, one of the gravest crimes anyone in football can commit. Despite Pundit Shoe now reaching utter ubiquity around the sport there remains a bizarrely hardwired view that the only suitable attire for football people is either very smart or very casual.

Hoddle confirmed as much, a man who in his own playing career tried to become an actual pop star but now proving that aged yelling at clouds comes to us all, shaking his head and saying Dele should “put a tracksuit on at least”. Hoddle genuinely seemed to think that Dele turning up in his own clothes and an Everton scarf was somehow disrespectful to the thousands of Evertonians who had turned up to the game doing precisely the same.

“I thought he’d just got dragged off the street to be honest. If I’m an Everton fan, you’re going to a new club. Put a tracksuit on at least or something.

“He’s got to get his head together. It’s not about Frank Lampard or Everton, he’s got to get back on the horse he’s good at, scoring goals from midfield.”

Again, this was all before Dele played a single game of football for his new club. We don’t know whether Dele will get back to his best at Everton. We’d argue that Hoddle has made another error here with “from midfield” and that if Frank Lampard – who has correctly and encouragingly dismissed these daft criticisms – really wants to get the best out of Dele he’ll stick him in the cheating position behind a striker and playing within the width of the penalty area with minimal actual midfield duties.

But that’s not really the point here, is it? The point here is that whether or not Dele dazzles at Everton will have nothing to do with the clothes he wears to his unveiling or which of his own cars he decides to drive to training or anything else.

They’ll be pleased he got rid of the dreadlocks anyway. The goals will surely flow now he has a sensible haircut.