Home F365 Says Delph: The most basic, sensible deal of the f***ing summer 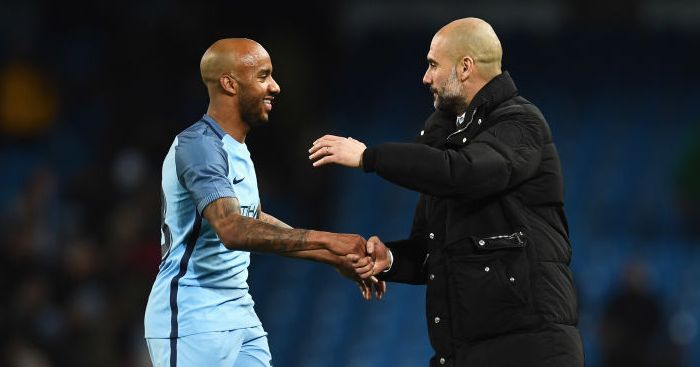 Vincent Kompany, with his two Premier League titles, embraced his role as captain. “If I want to see this team go to the next level, and do even more, every single detail, we need to be honest with ourselves and be hard with ourselves,” he said with a understated assertiveness.

Yaya Toure, then a two-time La Liga winner, two-time Premier League winner and former European and Africa Cup of Nations champion, discussed how City had been beaten “physically” as they were “fatigued”. Both were vocalising their thoughts from a position of authority, as players who had earned the right to speak both to and for their teammates in such turbulent times.

Pep Guardiola, backed by 12 league titles, three European Cups and a long list of achievements across his footballing career, then addressed his disciples. “When you lose in football,” he said, having seen his Manchester City side do precisely that against Manchester United in April 2018, “you think, we didn’t run. That is bollocks, guys. That is not the point.”

Fabian Delph was incensed. He raised a hand as his manager ignored him, the student dismissed by the teacher. But the class was stunned when Guardiola was then interrupted mid-sentence. The Spaniard stopped dead in his tracks, placed his hands on his hips and stayed silent for almost 30 seconds. Delph had the dressing room’s attention.

“When we go behind and something goes against us, we freeze. When something goes against us, think of the basics of football. Just the basics,” he continued, spoken with true Yorkshire eloquence. A player whose greatest individual honour at that point was an FA Cup runners-up medal felt no shame in admonishing a room full of more exceptional talents.

The clip, from the All or Nothing: Manchester City documentary, cuts off there, returning to show Guardiola expressing with his hands a different point about how “football is not flowers”. In the background, an exasperated Delph can be seen slumped in his chair, a hand resting on his face, refusing to disguise his frustration. Quite what happened in the interim is anyone’s guess.

Some may see it as subordination, others as a lack of respect or restraint, or perhaps simply a public bout of Delph confidence. He himself later admitted “it was an emotional moment” that he perhaps struggled to deal with. But Everton should consider it an Amazon Prime example of the “winner”, the “leader” and the “hunger” that the midfielder promised at his unveiling on Monday.

It is not a signing designed to set pulses racing, nor to sell shirts or season tickets. It is simply a remarkably sensible deal that suits all parties: Everton get a versatile, experienced Premier League winner for almost half a Matt Targett; City make a profit on a player who had one year left on his contract and was surplus to requirements; Delph has the opportunity to play 30 games in a season for the first time since 2014/15.

Those decrying the move ought to remember the transformative impact James Milner had across Stanley Park. The midfielder left City to join Liverpool as a 29-year-old seeking more opportunities in 2015, overcoming initial doubts to become one of Jurgen Klopp’s most trusted lieutenants. Circumstances dictate that Delph was more expensive and is unlikely to become a European champion under Marco Silva, but both deals were grounded in pragmatic and logical thinking.

Everton have lost Phil Jagielka (36) this summer. Leighton Baines (34) has committed for one more year, with third-choice goalkeeper Maarten Stekelenburg (36), Seamus Coleman (30), new signing Jonas Lossl (30) and Theo Walcott (30) all adding to the broth of experience. Delph, along with Gylfi Sigurdsson (29), Idrissa Gueye (29) and Morgan Schneiderlin (29), neatly straddles the line between wisdom and having years of fine service left to offer.

They have more ambitious plans; Delph cost almost one-third the price of Andre Gomes and could be thoroughly eclipsed by any combination of Kurt Zouma, Malcom, Moise Kean and Nicolas Pepe come the end of the transfer window. But not every signing has to make a statement. A quiet message of intent can be just as powerful.

“When I look to bring a new player into our squad, the first thing I look for above all the other things is quality and Fabian is a player with high quality,” Silva said on Monday. “But what they can bring to our dressing room is also important and if you can put those two things together then that can only be good for the club.”

The quality is clear: this is a central midfielder who started 21 games at left-back for one of the greatest champions in Premier League history. And the memory of Delph holding his own against Guardiola, Kompany and Toure leaves no doubt as to what he can bring to Everton’s dressing room. They had better be ready to concentrate on the f***ing basics of football.