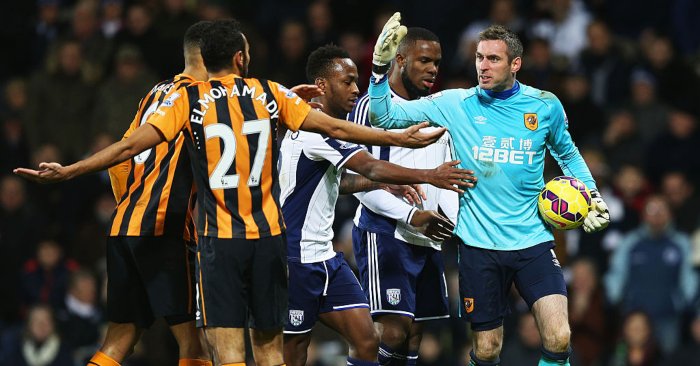 At some point every season we play the ‘what one rule would you change?’ game. In past years, I’ve gone for strict handball enforcement, limits on walls for free-kicks, and yellow cards for fouls where the player doesn’t try to win the ball. All of these have drawbacks, as do most of our suggestions, which fortunately allows us to debate them until the end of time, or at least until the next round of matches.

Here today, though, I’m going to propose a rule that makes the game fairer, gets rid of unnecessary delays, is easy to enforce, and has absolutely no drawbacks whatsoever. (This is of course the cue for commenters to disagree at length.) Ready?

‘A player who intentionally touches the ball after it has been awarded to the opposing team, but before the opposing team puts it into play, shall receive a yellow card for unsportsmanlike conduct.’

Really I should just stop here, and let you admire the rule in all its glory. But I’ll spend a few minutes parading my undoubted brilliance.

You know what the rule is about. The referee blows his whistle for a free kick, and a member of the penalised team nudges the ball several feet away from where the kick will be taken. Or maybe he picks up the ball, ostensibly to argue about a foul which was obvious from every seat in the stadium.

Then there’s the throw-in, where the player in question just happens to kick the ball against the advertising boards. Or perhaps he carries the ball several yards away from the opposing team, flipping it back just before the ref starts to get interested in what he’s doing.

Clearly what’s going on is that the defence is buying time to get into position, or to deprive the opponents of a chance to put the ball in play, to which the opponents have a perfect right. The word I’d use for this is ‘cheating’.

So you say it’s not cheating, but merely standard gamesmanship? Well, it’s only standard because we’ve let it become that way. Plus, I don’t think most of us really believe it’s a legitimate tactic. Else why would we get so indignant on the rare occasions a manager does it? A disgrace for a manager, but when a player does it, just part of the game? Not for me, Clive.

Okay, so it’s not that big a deal. It’s not quite the blot on the game as diving, for example. It’s even amusing to watch at times. But it slows down the action and gives one team an advantage they don’t really deserve. That’s reason enough to take action, if practical.

This rule is practical. If the offender is sufficiently sneaky, the ref might not see the infraction, but one of the assistants will. And yes, there may be a grey area or two, such as players claiming they haven’t heard the whistle. But we know exactly what offence the rule is designed for. With early, frequent and decisive enforcement, the practice can be virtually eradicated in short order.

This past weekend I watched all ten Premier League matches and tallied up the instances of this particular offence. I only counted those cases where the act was clearly visible on camera. I didn’t count the times where the player gave the ball directly back to the opposing team, but I did count the times where the effect appeared to be neutral (if the opponents spent time setting up a free-kick, for example), because the act at least eliminated the chance for a surprise quick free-kick.

Here’s the count, listed by type of re-start:

Yeah, folks. Almost 12 times a match. The count is almost certainly low, too, because it’s likely that several instances took place off camera. Only two of 118 cases were yellow-carded, where the violation was such that even the most lenient/oblivious referee had to act.

So I like my rule. It might need a tweak, because when the whistle is blown the ball is sometimes far from the place of the restart, and the penalised team is in better position to retrieve it. So let’s add a clause at the beginning:

‘Unless clearly allowed or requested by the referee, a player who intentionally touches the ball after it has been awarded to the opposing team, but before the opposing team puts it into play, shall receive a yellow card for unsportsmanlike conduct.’

Beautiful. A work of art. (And several years training as a lawyer.)

There’s probably something I’m missing, and I’m sure you’ll let me have it in the comments, in more ways than one. But better have your say soon. Tomorrow I’m on the phone to IFAB, and immortality.