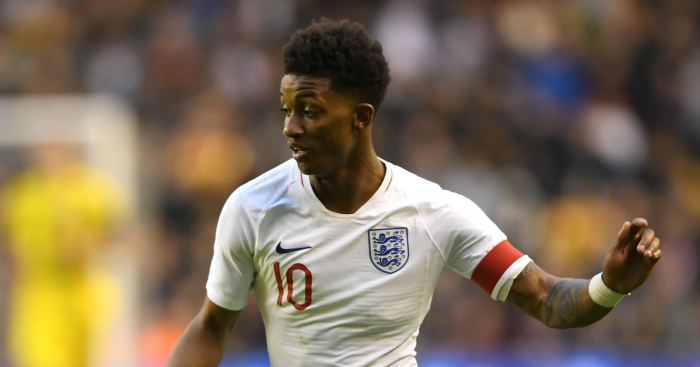 Demarai Gray feels it is time for him to take “the next step” at Leicester – and is targeting a place in the senior England squad in time for Euro 2020.

Since joining the club from Birmingham in January 2016, the 22-year-old winger has played 78 times in the Premier League, scoring four goals and providing five assists, with 50 of the appearances coming as a substitute.

He played the full duration last Friday when the Foxes, who sold one of their star attackers in Riyad Mahrez over the summer, opened their 2018-19 campaign with a 2-1 loss at Manchester United.

And ahead of Saturday’s home clash with Wolves, Gray told Premier League Productions: “I think it’s time I take the next step into my game.

“I’m 22 now and I’m maturing as a player and as a person. I’m training every day and taking each game as it comes trying to cement my place in the starting XI.

“I think because I’ve been around first team football since I was 17, I know the ins and outs of what goes on, what’s to be expected and the highs and lows.”

Gray, yet to be involved with England at senior level, has 18 caps for the Under-21s, with Three Lions boss Gareth Southgate having given him his debut for that side.

And with regard to his international ambitions, he added: “I don’t want to be watching England from the pub, I want to be at the next Euros, at the next World Cup.

“I think that’s my next target and to do that, I’ve got to keep working on my game here at Leicester and performing.”

They lost five of their last seven games last term, and after the United contest, it was reported that the Frenchman was in serious danger of being sacked.

Puel, currently the favourite with bookmakers to be the next Premier League manager to leave their post, has been described as “very ambitious” and hard-working by Gray.

“We’re aiming for the top half of the table, of course, and a European place,” Gray said.

“We weren’t far off last season. The manager is very ambitious and expects 100 per cent every game, so I think it’s only right given all the hard work he puts in, that we give 100 per cent.”

“I think the way we went 1-0 down was disappointing so early on in the game, but I think everyone can see that we controlled the game,” he said.

“I think there are a lot of positives to take into our game on Saturday.

“They (Wolves) are a very good team, they keep the ball very well. We know it won’t be easy and we know what to expect.

“It’s our first home game and obviously we’ve got the fans behind us, so I think as long as we play like we did against Manchester United, we should be fine.”