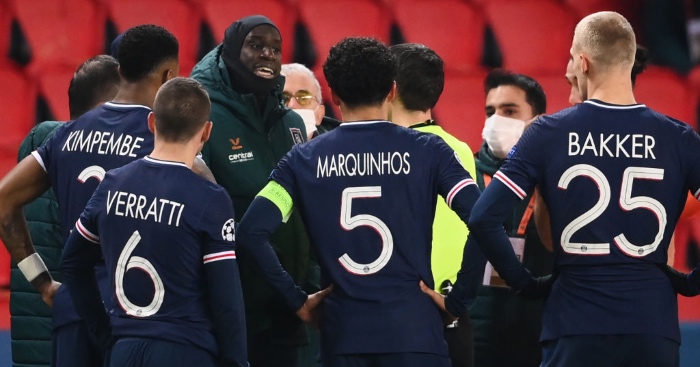 UEFA don’t really care about racism; that’s the only perception their historically pathetic sanctions allow. No, it was left to Demba Ba, PSG and Istanbul Basaksehir to enforce what – for the governing body – has always been a mere slogan rather than a campaign for change and actually say ‘No to Racism’.

The punishments doled out by UEFA in the last decade have ranged from no punishment at all to two-game stadium bans and £60,000 fines, the most memorable of recent times perhaps being Montenegro’s paltry – and weirdly specific – £17,396 fine for the blatant racial abuse of England players in 2019.

That followed Diego Simeone’s £13,000 fine for grabbing his crotch in celebration just two months earlier. A little over £4,000 was deemed the difference between a slightly lewd gesture from one man and the discrimination of an entire race of people by a collection of men. UEFA are unwilling to properly deal with the scourge of our game through fear of the knock-on effect that substantial bans for clubs, countries and individuals will have on their own meritocracy.

So the players, coaches and staff took matters into their own hands on Tuesday. They walked from the Parc des Princes after 14 minutes in what feels like a watershed moment for football.

Pierre Webo, Istanbul Basaksehir’s assistant manager, was shown a red card by the referee for a touchline altercation after fourth official Sebastian Coltescu identified him by pointing and saying “negru” in Romanian, which translates as ‘the black guy’.

Webo was enraged and was heard to repeat at least six times “Why you say negro?” as he sought an explanation from Coltescu.

John Barnes has voiced what will be the opinion of many: that identifying someone by the colour of their skin isn’t inherently racist. But delivery and context are obviously important here and the reaction of Ba and the other players shows that offence was taken and that should be enough to void all other arguments.

“Is he serious? We are heading in. We’re heading in. That’s it, we’re heading in,” Presnel Kimpembe said, before Kylian Mbappe led his side from the pitch, informing the referee: “We cannot play with this guy.”

It was not an incident so unsavoury as to be beyond apology, on the proviso that UEFA take proper action in response. Edinson Cavani was unaware of the offence his comments on social media would cause and Coltescu will likely profess the same innocence in response to the events on Tuesday. Neither episode is proof that these individuals are racist, but both provide clear evidence that they need to be educated to avoid discrimination, whether intended or not.

It’s not enough for Coltescu to say he didn’t mean to cause harm – he did and it really is as simple as that.

But crucially, action was taken. By the players, who collectively decided not to take this sh*t anymore and made a stand, which puts the onus on the lily-livered powers-that-be to put weight behind a message that’s so far been little more than words on an armband. Well played.