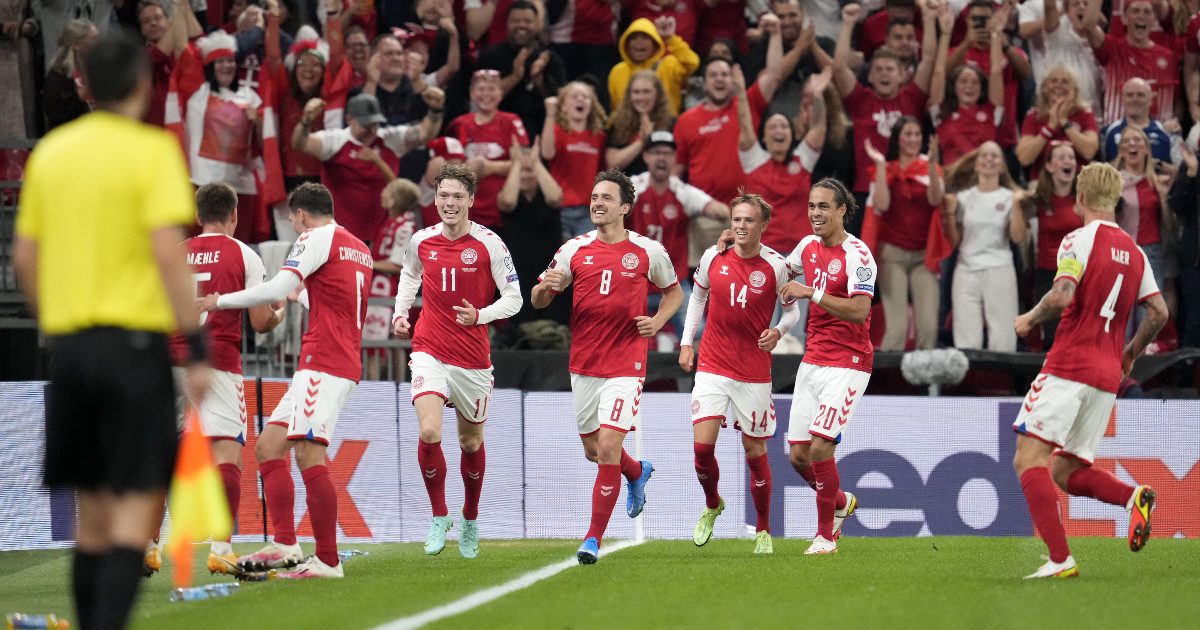 Two goals in two first half minutes from Daniel Wass and Joakim Maehle secured Denmark all three points over Scotland.

Wass got the first in the 14th minute. Tottenham midfielder Pierre-Emile Hojbjerg picked him out in the penalty area. He got the better of Kieran Tierney to head home past Craig Gordon.

Denmark’s lead was doubled moments later. A neat interchange from the hosts led to Maehle being fed the ball. From a tight angle, the midfielder squeezed it through Gordon’s legs to make it 2-0.

While defeat was no surprise, it puts the Scots’ qualification hopes under a harsher light.

Scotland now have five points from a possible 12 and face Moldova at Hampden Park on Saturday before a trip to Austria next Tuesday and they are running out of points to lose.

Kasper Hjulmand’s side, who reached the semi-finals of Euro 2020, have won all four Group F games and look to be cruising to qualification.

Clarke had claimed it was the most disruptive build-up to a match in his time as Scotland boss and through injuries and Covid-19 issues, he had to choose from a depleted squad.

Craig Gordon, the 38-year-old Hearts keeper, was reinstated for his 58th cap while to some surprise, captain Andy Robertson was be deployed as a right wing-back with Kieran Tierney on the other side.

Kenny McLean, who missed Euro 2020 through injury, was back in midfield alongside Norwich team-mate Billy Gilmour with Che Adams leading the line.

Denmark were also without several players including star striker Martin Braithwaite and Kasper Dolberg but it did not affect them as they stormed into an early and commanding lead.

It was all too easy when Wass rose above Tierney at the back post in the 13th minute to head in a searching cross from Pierre-Emile Hojbjerg.

Less than two minutes later, there was more finesse when Maehle slipped a second through the legs of Gordon from six yards after working a one-two with Mikkel Damsgaard.

The visitors then struggled to stem a red and white tide.

Danish goalkeeper Kasper Schmeichel was a spectator as the home side gave Scotland the run-around and in the 32nd minute Gordon had to make a save from Yussuf Poulsen following a free-kick to the back post.

Scotland were happy to hear the half-time whistle and Clarke brought on Dykes for Scott McKenna.

Tierney moved into the back three, Robertson back over to the left and Ryan Fraser dropped to right wing-back.

Three minutes after the restart Gilmour drove wide from 25 yards to five to offer some hope.

However, Denmark’s talent could not be suppressed and just after the hour mark Gordon clutched Thomas Delaney’s 25-yard drive.

Ryan Christie replaced Adams in the 71st minute and soon afterwards McLean set up Callum McGregor but his left-footed shot was easily saved by the under-employed Schmeichel.

Defender Grant Hanley headed a Gilmour cross past the far post before Schmeichel made a fine save down at his right-hand post from Fraser’s shot with the corner coming to nothing.

With four minutes remaining Gordon made a save from Hojbjerg’s close-range header and, as the game eased into added time, midfielder Lewis Ferguson replaced Gilmour to make his Scotland debut but the match was effectively over.