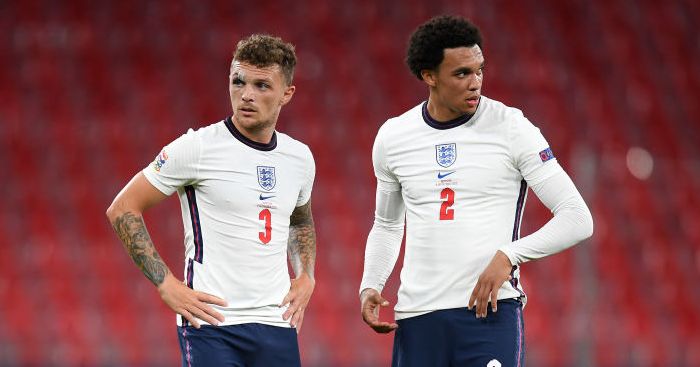 How did the four England debutants fare against Denmark? Better than Trent Alexander-Arnold and Eric Dier, that’s for damn sure.

JORDAN PICKFORD
The clamour for Nick Pope, Dean Henderson and Scott Carson will continue in most quarters but a fourth consecutive clean sheet makes Pickford’s point for him. He even earned this one, saving at point-blank range from Dolberg when the defence summarily failed him, and maintaining control of his tiny limbs for 90 minutes instead of 89 with one brainfart. The Everton keeper’s distribution tends to impress regardless but it was actually quite poor on Tuesday evening. Nevertheless, this was much better all round.

LIVERPOOL FAN CONOR COADY
Probably England’s best player. It would do him a disservice to suggest he looked entirely at home because that was utter dirge and he deserved better. But he was immediately comfortable at international level and raised the question as to why it has taken so long to include him. Coady is perhaps less renowned for his defending than most other centre-halves but fared well against a diligent Denmark attack. He should also be nicknamed The Bishop if he isn’t already because by Christ does he like a diagonal.

JOE GOMEZ
Got carried away with the raking passes but it felt like he did most of the defensive work in that back three. He was thoroughly average in a game that was utterly dreadful but pretending that only playing alongside Virgil van Dijk makes him look good is fashionable so let’s go with that even though it is patently untrue and the Dutchman gets away with more mistakes than he should because of his self-perpetuating reputation yes that is the hill I will happily die on.

ERIC DIER
Was rinsed like a raggedy-ass dishcloth by Christian Eriksen for that Dolberg chance in the first half but didn’t play and train with the Dane at club level every week for half a decade so can be forgiven. If you close your eyes and picture Eric Dier playing as the left-sided centre-half in a back three then this was pretty much what you’d envision. There were no lessons to be learned here.

TRENT ALEXANDER-ARNOLD
He has ‘Scouse not English’ tattooed somewhere on his person, doesn’t he? England have thus far resisted the temptation to emulate Liverpool in building their entire system around Alexander-Arnold and it really does show in his displays. He looked defensively suspect on a handful of occasions and suffered for such a plodding overall approach. One of the best outlets in all of the Premier League did not find a teammate with a single cross, and often struggled to reach a white shirt with simple five-yard passes.

KALVIN PHILLIPS
A debut to be content with, at the very least. Phillips was the best of the thousands of defensive midfielders on the pitch, forced to share responsibilities he has shouldered alone with aplomb for Leeds. He made five tackles – as many as the rest of his new teammates combined in 75 minutes – while no-one made more than his two interceptions. And that ball out to Alexander-Arnold early in the second half was the best of the entire game. Southgate will presumably fine and drop him for daring to try and create something.

DECLAN RICE
He seems like a lovely fella. The sort that does well with in-laws and changes the filter on his vacuum cleaner every month. But not the kind that suits this England formation, if indeed any player does. He offered approximately nothing in attack and not a significant deal more in defence, which feels counter-productive when you only have ten outfield spaces to fill in a standard-sized football team. Managed to not proposition any Icelandic models, mind. That we know of.

KIERAN TRIPPIER
No more of that, please. He does a serviceable job on the left and that is testament to his ability and adaptability, but this cannot be more than a stop gap solution. At least we know he can do it if he absolutely has to. With that said, Trippier did create three of England’s six chances. As someone who has often struggled with maths, even I know that is about half.

JADON SANCHO
Not great. At all. The absolute dictionary definition of a ‘5/10 – Manchester United target struggled to make an impact,’ assessment in each of Wednesday morning’s national newspapers. It is difficult to know which statistic is most surprising: a 100% passing accuracy or the fact he did not complete a single successful dribble. An explosive attacking player of this calibre might not look at either too fondly, although his uninspiring performance was one of the many avoidable consequences of such an unadventurous system.

HARRY KANE
One of those evenings, epitomised by the fact he committed as many fouls as he had shots and had fewer efforts on target than clearances. A late clearance off the line prevented gloss from being added to a general hard-working turd of a performance in which Kane toiled but did not trouble.

RAHEEM STERLING
The only England player to strike that delicate balancing act of both having a shot and creating a chance across 90 minutes. Sterling was far from his most effective but at least looked bright and confident enough to carry the ball and try different things. Shame none of them paid off but still.

MASON MOUNT (on for Sancho, 60)
Injected energy and drive. England had one shot in an hour without him and five in the subsequent 30 minutes. He has a role to play, even if that includes being mocked and chastised as a sensible second-half substitute.

JACK GREALISH (on for Phillips, 76)
He had to be flawless, such are the hoops Southgate seems intent on making him jump through. Grealish did not misplace one pass, created a chance and tested the Denmark defence with a mazy run in a quarter of an hour. That should be enough to stay in the fold.

AINSLEY MAITLAND-NILES (on for Alexander-Arnold, 87)
Had one touch and it was f**king brilliant.