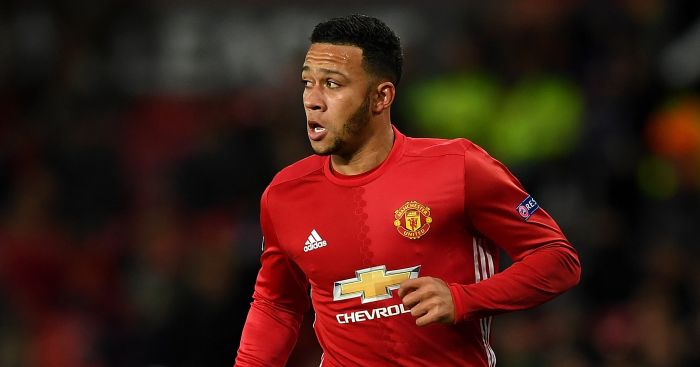 Memphis Depay claimed he is now a more mature player – but does not own a red leather jacket – after returning to Manchester for the first time since leaving United on Tuesday.

The Dutch forward endured a miserable 19-month spell at Old Trafford before joining Lyon in a £15million deal in January last year.

Former United team-mate Wayne Rooney said in a recent interview that Depay once turned up in a Rolls-Royce, wearing a red leather jacket and cowboy hat, for a reserves fixture after being dropped by Louis van Gaal.

Depay, who is now one of the chief attacking spearheads of a Lyon side preparing to face Manchester City in the Champions League on Wednesday, laughed off that story.

Speaking at a press conference at the Etihad Stadium, the 24-year-old said: “Me and Wayne are very good friends. Of course he is a legend and when I heard about it I was just questioning – I don’t have a red leather jacket out of my thousand leather jackets!

“But I understand what he meant with it and that’s it. It doesn’t need to be brought up again. It’s in the past.

“I’m a flamboyant guy and I like nice stuff but that doesn’t mean I couldn’t be more smart. I’ve become more mature.

“Other than that, sometimes we take things too seriously and you should laugh about a joke and keep going. I’m sure he is happy with how I turn up now and the football player I am. I’ve been gaining more quality and feel very strong.”

Depay has certainly taken the chance offered to him by Lyon, scoring 22 goals last season to help the club back into the Champions League after a one-year absence.

His United experience was not a pleasant one but he blames himself for his problems and bears no ill feeling towards the club.

He said: “It’s the first time I’ve come back to Manchester after I left. That feels special and I’m happy to come back here and play against Man City.

“Everybody knows the story of me and Manchester United was not successful but I’m just happy that I’m the player I am today.

“I can look back and say I didn’t want it to go like that – nobody did – but things happened. I became a much better player. I can feel it in games and everyone can see it.

“For sure, the city is still red and we will try to get a good result against the Blues.”