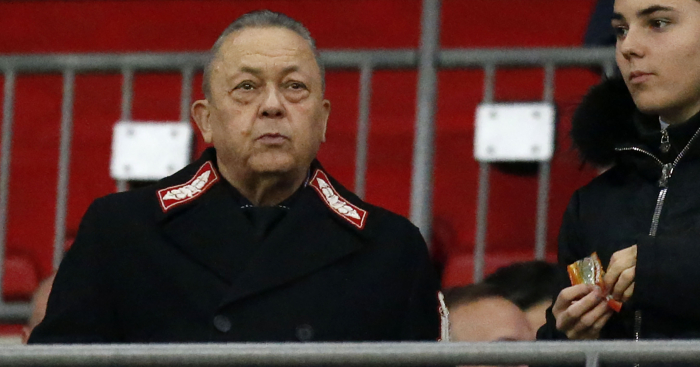 West Ham co-owner David Sullivan says the club are struggling to make any new signings this summer and has defended their decision to sell Grady Diangana.

The Hammers have so far only brought in Tomas Soucek from Slavia Prague for £15m, who was on loan at the club over the second half of last season.

“We have a number of bids in for a number of players, these are key players at decent size clubs, obviously outside the UK. They don’t want to lose them so it is difficult. Whether we get any of these players, I do not know. Some are young, some are old.

”What we need is wins. The way we played against Arsenal at the weekend, we are capable of winning games.”

Newly-promoted West Brom completed the permanent signing of winger Diangana on a five-year deal earlier in September with both Mark Noble and Jack Wilshere making their feelings clear on social media.

And Sullivan has defended the decision to allow Diangana to leave, he added: “It was a decision made because we have eight wingers. Agents offer me players all the time and if they are wingers, I say ‘look we have got too many wingers’. We have some wonderful wingers who are not in the team.

“Robert Snodgrass who played yesterday in a holding midfield role scored a wonderful goal. Anderson is a fantastic player, Yarmolenko had two assists last night. Unfortunately we have got a very unbalanced squad.

“We now have the funds to buy a player or two. Unfortunately players the manager wants, we can’t get. We have two or three bids. Unfortunately the benchmark is very high, it is very hard to get those players.

“I cannot say for sure we are going to sign anybody. As each day passes, I get more depressed.

“We are not Roman Abramovich. We are not the owner of Abu Dhabi who owns Man City. Even they have some sense now in value and they won’t overpay on what they value a player.

“You can’t pay double what you valaue a player at. We haven’t got the money. The club will go bankrupt. These are difficult times and we have to be sensible.”