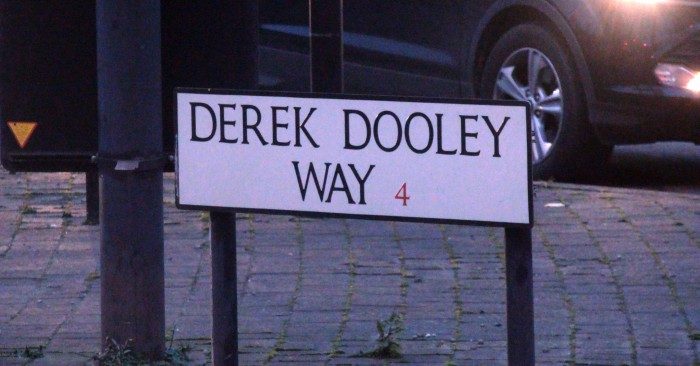 Derek Dooley’s career began and ended in the same place. His first professional appearance for Sheffield Wednesday came at Deepdale in March 1950 and, with bitter irony, it was there, on Valentine’s Day 1953, that it came to its shuddering halt. Chasing a through ball, he collided with out-rushing goalkeeper George Thompson, breaking his right leg in two places.

Just 23, his life was irreversibly altered. The double fracture might not have ended his playing career, but a gas gangrene infection suffered in hospital did; as a result of a small, untreated cut on the back of his calf, his leg had to be amputated above the knee.

“Well, Derek, except for the fact that you can’t play football you can live a normal life.”

Dooley’s reaction to his misfortune can be measured in the abstract. Wednesday’s promotion back to the First Division in 1952 was powered by 46 of his goals, which would ordinarily be enough to iron-clad a legacy, but he lived a remarkably full life after his career ended. He would manage the club between 1971 and 1973 and – after an acrimonious sacking and the kind of pivot which would never be tolerated today – in 1974 he began an executive career at Sheffield United which would last over 30 years.

His statue stands on guard outside Bramall Lane; this dyed-in-the-wool Wednesday fan was both the chief executive and, eventually, vice president at United. Before the end of his life, he would be awarded an MBE and the Freedom Of Sheffield and, shortly after his passing, Derek Dooley Way would be christened to provide enduring testimony.

Yes, this was a full life – one re-directed by disability, but not limited by it.

When tragedy strikes a professional athlete, it’s easy to overlook the human challenge, to believe them immune to real world difficulty. Without exception, contemporary descriptions of Dooley the player focus on his size and strength. He was a rugged obelisk of a centre-forward who scored goals with force of will rather than grace. It was a style which served him well and allowed him to achieve probably beyond his potential, but it did not offer any emotional protection; the aftermath of his accident would have been as frightening to him as anybody else. 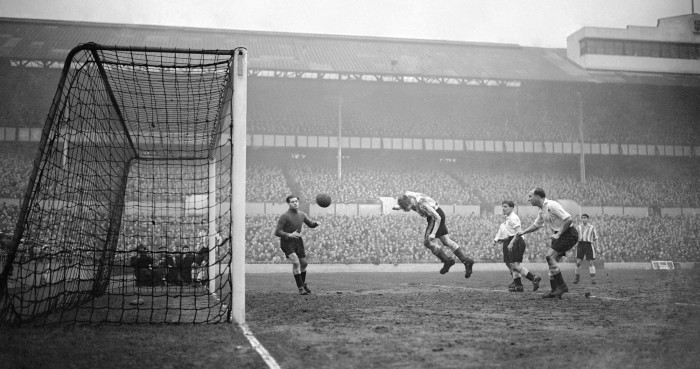 Footage of Dooley is scarce. The Press Association archive does, however, chart the weeks around his accident. Their cameras were at White Hart Lane in late January 1953, catching him in two strikingly similar poses: one, soaring above the Tottenham defence and heading towards goal. Another: head down, eyes on the ball, butting into the net for what would have been one of the final times.

They weren’t at Preston, though. The agony of that moment is lost to time. The aftermath isn’t though and it provides a vague, voyeuristic insight into Dooley’s character. There’s a picture of him in hospital, being visited by Tommy Docherty and Tom Finney, his eyes looking up at them with a brave smile. Theirs are looking down with fear, seeing a reality that they’d rather not acknowledge. 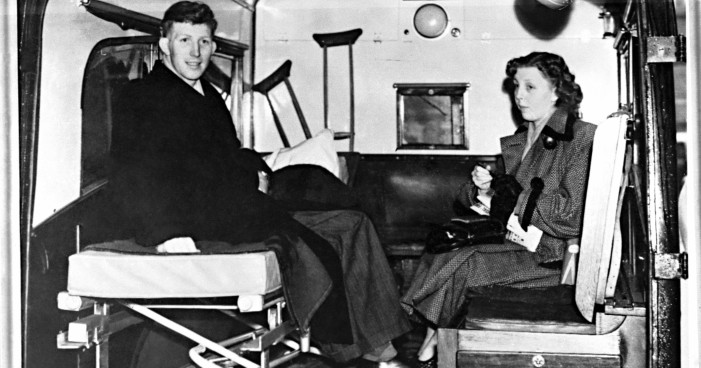 There’s another set taken shortly after his discharge and they’re fascinating, not least because they’re so wrong – so incongruous with the circumstances. One is of him in a chair, in a thick winter coat which doesn’t quite hide his missing limb or his drooping trouser leg. The second is taken in an ambulance, presumably ready to take him home. In both pictures he wears a radiant, defiant smile and there isn’t the slightest hint of what has taken place.

If the cliches are reliable, then that’s hardly surprising. Men of that time were not prone to shows of vulnerability, so Dooley’s stoicism is expected. But then look at his wife: in both images, Sylvia is looking down and the fear in her eyes is plain to see.

It was a situation that he would describe many years later, in conversation with Arthur Hopcraft for The Football Man, but it’s one which can be seen in her expression in real time. Life has changed. To what, she doesn’t know.

Photographs capturing someone’s response to suffering are always compelling, not least because they ask questions of ourselves. How would I cope in that situation? Would I be able to smile for the cameras and put on a brave face?

Would I emerge from the trauma to take full part in life?

In a sense, Dooley had no choice: all footballers of his era had to work again and once their careers finished, most would generally just sink back into whichever communities they came from. But he lived publicly. He would become an accomplished after-dinner speaker, full of dry wit and self-deprecation, and would later occupy an unfathomably broad range of roles with both Sheffield clubs, demonstrating a range of skills which had little root in his playing career.

The obvious point to make here is that Dooley’s career ended just eight years after the end of the Second World War. Society was not short of either wounded heroes or perspective. Only he himself could explain, but maybe that context helped to cure whatever bitterness he might otherwise have understandably carried.

Dooley was also a child of 1930s Sheffield. The son of factory workers, he grew up surrounded by reminders of what Hopcraft refers to as the ‘static nature of working-class life’. Football took him beyond the boundaries of his likely existence and, albeit briefly, allowed him a far richer life than many of his contemporaries would have enjoyed. Losing a career at just 23 is always a tragedy, losing a limb more so, but perhaps Dooley was instructed by the knowledge that there were worse fates.

For a reminder of what a privilege football was, Dooley didn’t have far to look: his own father had once had to turn down a trial with Bradford City, unable to get time off work.

“Of course it was hard at first. But when you’re standing on a touchline on a freezing day and someone next to you says: `God, it’s so cold both my feet have gone numb,’ you just have to laugh and say: `Yeah, but it’s only half as bad for me.'”

In time, the game would take care of him and that doubtless helped to foster good humour. A benefit game was held at Hillsborough, the very first to be played under floodlights, and the proceeds bought the house in which he lived until his death in 2008. His re-entry to the sport as a part-time scout for Sheffield Wednesday and a reporter at the Daily Mirror owed much to community goodwill and his playing reputation. Football didn’t abandon him and the worst fears captured in those hospital photos were never realised.

What Dooley means to Sheffield is strictly the city’s business; outsiders have no place commenting on or determining a local hero’s worth. In the abstract, though, he’s a symbol for something which appears to have been eroded by modern life: the virtue of getting up and getting on with it, the possession of an indomitable spirit. In life, not just on the field. It’s tempting to dwell on how unique it is for someone to be equally loved by two fierce rivals in the same city – tempting and apt – but the greater wonder is his resilience.

He suffered misfortune and met it as he would any grizzled centre-half or thick-set goalkeeper; he ploughed straight through.