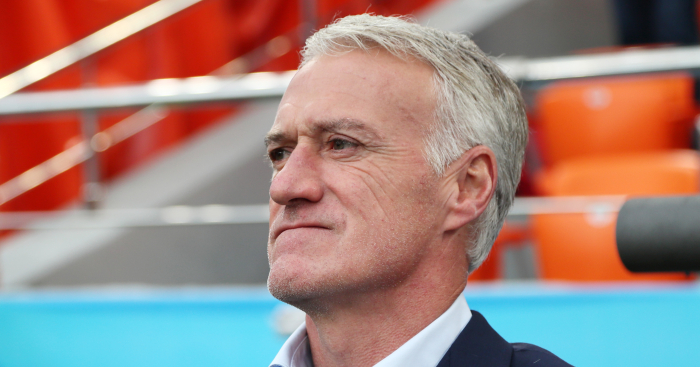 Watching this France team under Didier Deschamps can be a testing experience. It reminds of taking a middle-aged Dad shopping to forcefully buy him smarter clothes and gadgets, a shirt that hides the gut and a smartphone so he can finally keep in touch with his kids. As soon as he gets home, he throws the purchases into the back of the wardrobe, pulls on his old jumper with the fried egg stains and turns on the old Nokia. Given every chance to be better, France still infuriate and disappoint.

If this strikes as an uncharitable assessment of the manager of a team that has won both of its first two World Cup games, consider each France performance and consider their potential. Consider too that we have seen this before. France scuttled their way to the final of Euro 2016, only to lose to a Portugal side that had failed to win a single group game.

France were frustrated by an ultra-defensive Australia in their first game, victory via penalty and own goal, and responded by resorting to the tried and tested method of sending balls to the head and chest of Olivier Giroud. Nobody is doubting the efficacy of the strategy against weaker opposition, but what happens in the quarter-finals onwards? Why is this still it? What has changed in the last two years? Why am I asking so many rhetorical questions?

One of Deschamps’ party tricks is tinkering with his starting XI to the extent that Claudio Ranieri is considering suing for copyright. Giroud’s recovery from a pre-tournament head injury allowed him to take Ousmane Dembele’s place, but the more controversial change was Blaise Matuidi on the left despite Thomas Lemar and Florent Thauvin both being better fits for that position. If it does all go awry for Deschamps, he can surely rely on a professional career at cramming square pegs in round holes.

Deschamps et al were fortunate to face a team as naive as Peru, winning many more friends than football matches in Russia. Their vast hordes of supporters are one of the many feel-good stories of this World Cup, but surely the most colourful. There have been countless stories of houses and cars sold to fund the trip of a lifetime. Thousands descended on the most easterly city in this tournament. This was Yekaterinburg, suburb of Lima.

If Australia offered the blueprint to frustrate France, Peru proffered thanks for the advice before walking off in the opposite direction. Only Brazil and Uruguay scored more goals in qualifying than a team who bask in their glorious chaos. It is hard to imagine two more different opponents than France’s first two in this tournament. Attacking football is Peru’s lifeblood. They are artists, not diplomats.

Even so, artists can still remember to buy bread and milk from time to time. Peru started the game intent on sprinting the marathon, but noticeably tired before half-time. Ricardo Gareca’s response was to bring on Jefferson Farfán and make his side even more attacking. They have flown east for a good time, not a long time.

Yet it almost worked. Rather than inviting Peru’s now-four-man attack onto them before hitting them on the break – think Germany vs England 2010 – France panicked. Pedro Aquino hit the post as France launched the ball high and long with increasing regularity and let the ball bypass midfield. On commentary for ITV, Lee Dixon tutted and ticked France off for their lack of control. A nation nodded in agreement.

You do wonder just how many young, gifted players would be enough to account for the flaws in Didier Deschamps’ management, and this tournament may well provide the answer that this bumper crop is not sufficient. The depth of French footballing talent is unsurpassed. The list of players who have not made this World Cup squad is stunning: Kingsley Coman, Anthony Martial, Dimitri Payet, Alexandre Lacazette, Adrien Rabiot, Lucas Digne.

The accusation – inside and outside France – is that this squad will achieve despite its manager, not because of him. A group of high-achieving prodigies are being led by Mr Deschamps, the substitute teacher. In the background stands Zinedine Zidane, the young head of department currently without a job.

Comparisons between the two former teammates are not flattering. Deschamps is an analogue coach for France’s digital era.