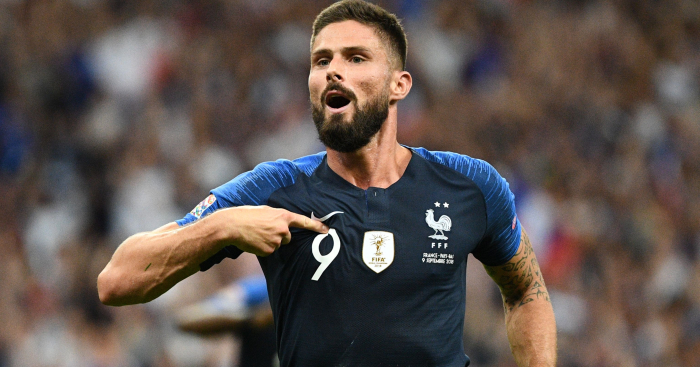 France match-winner Olivier Giroud admits he was aware he was about to be substituted before he scored his landmark goal in the 2-1 Nations League victory over Holland.

In addition to ending his 10-match international drought the 75th-minute strike took him past Zinedine Zidane to third on France’s all-time list with 32 goals.

“I thought I was going to be taken off. The game against Germany was my first of the season as a starter and the coach took me off, which was normal,” said the Chelsea forward, who extended his stay on the pitch by 14 minutes with his goal.

“I suffered again physically today and I realised I didn’t have many minutes left.

“I know Benjamin Mendy’s ability to cross to the near post and I went for it – it worked out well for me and the team. I’m very happy for everyone.”

Ryan Babel looked to have spoiled the World Cup winners’ homecoming party on their first appearance in Paris since the summer success in Russia after his first competitive international goal in 13 years cancelled out Kylian Mbappe’s opener.

Coach Didier Deschamps, whose side now have four points from their opening two matches, accepted the atmosphere would have been very different without Giroud’s intervention.

“The win was the most important thing in order to make this a beautiful party,” he told a press conference.

“I’m very happy for Olivier Giroud. Strikers go through periods when they don’t score as many goals.

“He’s useful to our play and he scored a lovely goal that gave us the win this evening.

“We’re going to savour it. There was a formidable atmosphere this evening and it’s going to carry on for a bit.”