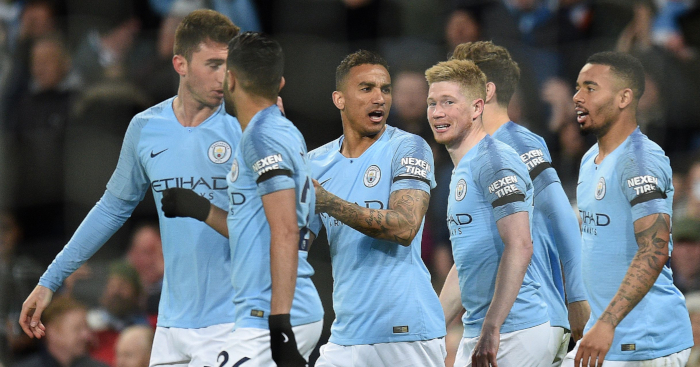 We scoffed at the ridiculously romantic notion of ‘destiny’ and ‘fate’ leading Liverpool to the Premier League title as self-indulgent journalists sought to explain their late victory over Tottenham in terms other than the truth: that Hugo Lloris made a by-no-means-unusual mistake under pressure from an excellent team. It was a tad embarrassing that Jurgen Klopp was asked whether he felt that fate was on their side, and then very embarrassing indeed when Pep Guardiola was asked the same question.

But, watching City destroy yet another Premier League with yet another display of exquisite football despite being without three of this season’s outstanding performers – Raheem Sterling and Bernardo Silva rested as Sergio Aguero missed out altogether – you start wondering whether Liverpool’s only real chance of winning this title is to believe in some higher power dragging the ball into the net. Even then, it might not be enough, because this City side is simply extraordinary.

Yes, it was only Cardiff. Just like it was only Fulham on Saturday, after which Guardiola felt comfortable enough to make seven changes. Before that it was only Watford, just after only Bournemouth, only West Ham, only Chelsea, only Everton and only Arsenal. Manchester City might have been expected to win every one of those games – and the five in various other competitions during that spell – but nobody should attempt to denigrate any side that manages to win eight consecutive Premier League games. That these wins sometimes look like training-ground exercises should never be used as an insult.

Should Liverpool triumph in this title race, it will not be undeserved; there is no such thing as a lucky Premier League title win. But with six games left to play, there should be no controversy in saying that – so far – this City side has been superior to any other in the Premier League. Nobody will talk about fate or destiny if they retain their title, only about a wonderful set of footballers being coached by a modern giant of the game. Oh and money; they will always talk about money. But there are no ghosts, no 12th men in the stands, just football. And they are really bloody good at football.

Frighteningly for Liverpool, last year’s Player of the Year is only joining the party in earnest for the run-in. They have barely missed him but Kevin De Bruyne reminded us of his supreme quality against Cardiff, leaving us with the question of whether City have three, four or five central midfielders better than anybody at Liverpool. He had set up one excellent chance within the first minute and then opened the scoring from an angle we are contractually obliged to call ‘impossible’. He was not directly involved in City’s second, but in almost everything else.

If Liverpool’s great hope was that City’s involvement in three competitions would distract them – though 13 straight victories in all competitions would suggest they are not easily distracted – then Guardiola feeling comfortable enough to play Phil Foden sends a different message. While Liverpool have 16 players Klopp has trusted to play more than 900 minutes of football this season, Guardiola has 21. When you have that kind of squad depth, fixture congestion is more opportunity than obstacle.