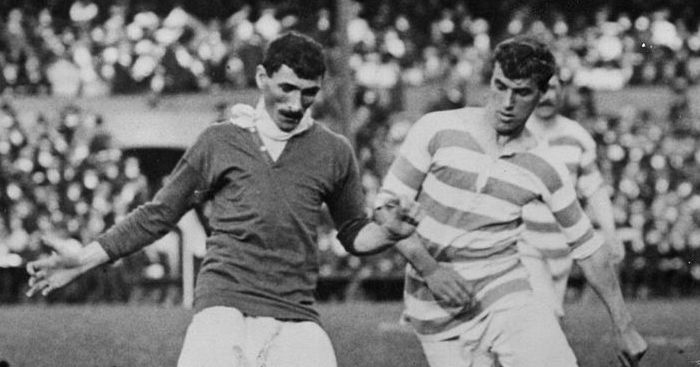 The death of ‘one of the finest full-backs the game has ever known’ to football injuries played a part in establishing the PFA.

Di Jones’ death was the leading sports story in the August 28, 1902 edition of the Manchester Courier. Underneath an advertisement for Burgess Tailors, previously of 33 King Street, and above the results of a local shooting competition, it was noted that ‘the popular full back of the Manchester City Football Club’ had passed away, aged 35.

Jones’ last game had been less than two weeks before, on August 16. He had been taking part in a friendly ahead of the new season when ‘while tackling an opponent, (he) fell on a piece of glass’. A horse ambulance was called to Hyde Road – Maine Road’s predecessor – and Jones, having refused a stretcher after choosing instead to make his own way off the field, was taken to the local infirmary.

Descriptions of the injury vary from account to account, but the cut to his knee was supposedly three inches long, bone-deep, and full of mud, glass and – supposedly – the head of a used match. Quite understandably, the friends who had accompanied him to the hospital urged him to stay.

Jones checked himself out, though. According to the Courier’s report, he discharged himself and walked to Victoria Station, from where he caught the train back to his home in Bolton. A week later, on August 23, Jones developed what the report described as ‘alarming symptoms’ and despite being attended by a famous Manchester surgeon of the day, he would die at home, four days later. His cause of death was blood poisoning and lockjaw, and he left a wife and two children.

There are very few pictures of Jones. In fact, a Google search reveals mainly pencil drawings, the odd hazy photo, and this one, of Jones as a teenager, with the Chirk Club side who beat Davenham in the 1887 Welsh Cup Final. But the descriptions of him remain rich and vivid.

The British Newspaper Archive also contains a report from the Bolton Evening News, printed on the night of his death. In it, Jones was described as ‘one of the finest full-backs the game has ever known’, as someone who had ‘gained universal esteem both on and off the field’, and a player who had ‘attained an imperishable reputation’.

It’s possible that the reporter may have been taken by the moment, but Jones’ accomplishments were real enough. He had won the Lancashire Cup with Bolton, beating Blackburn in 1891. His Wanderers had also reached the final of the FA Cup in 1894, losing to Notts County in the final. In 1897, he would also win the first of 14 caps for Wales. The Manchester Courier notes that by 1902 his pace had begun to dwindle, but ‘his splendid judgement, however, made amends for any deficiency in (that) respect.’

He was a veteran player, one seemingly admired by everyone. His death would have been significant. But not unusual.

As Simon Burnton describes in this article for the Guardian, fatalities on the pitch were not unprecedented. The previous decade, St Mirren’s James Dunlop cut his knee on a bottle which had been thrown onto the pitch by a supporter, dying ten days later in startlingly similar circumstances. In 1896, Burnton records, Joe Powell – an Arsenal player – would die after fracturing his wrist and despite having had his arm amputated in an attempt to save his life.

Infections were very common, probably even more so in amateur football, and would be until as late as the 1960s, until a vaccine against tetanus was available.

Di Jones remains most significant, though. In the final paragraph of its report, the Manchester Courier notes that an inquest was due to be held the next day. It was and it would be controversial. Manchester City were adamant that procedures had been followed and that the wound had been treated properly, both at the side of the pitch and in the hospital.

The jury were less than convinced, though. They believed that Jones should have been prevented from refusing a stretcher and that he should never have been in a position to discharge himself from the infirmary. In short, they contested the implication that he and he alone should hold responsibility for his wellbeing.

Not only did the club disagree, they also contested that there had been any glass on their pitch. They also refused any liability, claiming that because the game was a friendly, Jones – technically – wasn’t actually at work.

A further part of the club’s defence was Jones’ size: he was nearly 5ft11in and almost fourteen stone, well above average for the time. As such, they claimed, physically preventing him from doing as he wished would have been impossible. He was a rugged player and a former miner; if he didn’t want to get on a stretcher, nobody was going to be able to force him. If he wasn’t willing to remain under care, he wasn’t going to.

In a description of the times, the coroner himself was also incredulous at the suggestion that clubs should be compelled to have medical staff at every game and, unsurprisingly, he would absolve City of any blame, ruling Jones’ death to have been an accident.

Jones’ fellow players were outraged and, inadvertently, his death would be one of the driving forces behind the formation of what would become the PFA. A first, unsuccessful attempt at unionising had been made in 1898, with the formation of the Association Footballers’ Union. In 1907, however, instructed by the introduction of the maximum wage in 1901 and concerns about player safety, the Football Players’ and Trainers’ Union was founded, with Billy Meredith as its inaugural chairman.

The same Meredith, of course, who had also started his career at the Chirk Club and who had played alongside Jones for Wales; who had been his friend and teammate at Manchester City at the time of his accident. Meredith witnessed firsthand the lack of protection afforded to players who suffered industrial injury and Jones’ death and its aftermath left an impression on him, in time becoming part of the PFA’s DNA.

In truth, the Union’s early history isn’t anything more significant than a collection of skirmishes with the clubs and a series of running battles with the Football League. The maximum wage would gradually rise, but would remain as legislation until 1961. The Retain & Transfer system, that other great enemy, wouldn’t be defeated for another two years after that, in 1963. It was slow progress.

Nevertheless, it’s at its beginning of that process that Di Jones’ memory resides, with his legacy being the creation of at least the appetite and means for future reform.