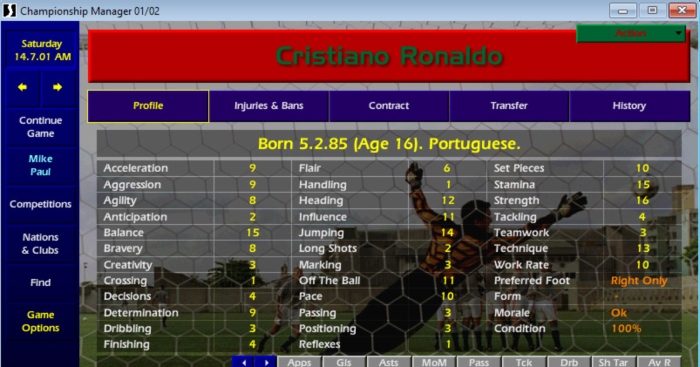 (Just before we start – some info for those interested in my game settings. I have simply done a clean install of the game with no patches or data updates. I know, I know, the official patch is good, but I prefer the vanilla game. All leagues have been selected as background, with England playable down to the Conference. I’ve also gone max database size to get as many players as possible.)

July 14 2001. A day no doubt etched into the memories of everyone currently on the wrong side of 30. Let me take you there: Manchester United have just broken the British transfer record to sign
Juan Sebastián Verón. Turn by Feeder is blaring out of every radio in a 12-mile radius. George W. Bush is setting new lows as one of the worst US Presidents of all time. How lucky we were.

However, most notably of all, the tiny town of Irthlingborough in Northamptonshire is about to undergo a footballing revolution. Local side Rushden and Diamonds FC – owned and funded by
millionaire Doc Martens president Max Griggs – have just been promoted to the Football League for the first time. Their £6m transfer kitty is enormous for a team in Division 3, but as a recently promoted side, their only expectations are to avoid relegation. It would be a golden start for any manager, let alone a plucky, untested one with little consideration for finances and a great knowledge of Scandinavian wonderkids. I humbly accept the job.

I arrive at the club gates with a single purpose: to use my knowledge of the 01/02 transfer market, and the resources at my disposal at Nene Park, to take Rushden and Diamonds to the Premier League title. The pros have already been established: money is abundant, and expectations are low. However, it also comes with one obvious downside: are any of the players I know, the legends of CM 01/02, going to be prepared to come to Division 3? And even if some of them do, will they cut it on a cold, rainy Wednesday night in Kidderminster? Or am I going to be stuck with the plodders that make up my starting squad for a whole season and get relegated in disgrace? Only time, and several large, strong coffees, will tell.

Now, in real life, the Rushden dream only lasted until 2005. Then, Griggs sold the club to the fans for £1 because he couldn’t deal with the club’s losses any more, and by 2011 the whole place was dissolved. This was down to dreadful financial mismanagement and general failures on the pitch. However, this management team will usher in a new era of financial responsibility, determined to avoid the mistakes of our real-life counterparts.

My first order of business is to submit a £5m bid for Djibril Cisse, just to get the juices flowing. Of course, I know he’ll never sign for us – despite the obvious lure of Irthlingborough’s rich cultural heritage, he’s unlikely to swap trips to Monaco and Paris for Hartlepool away. Decent stats, though.

Ridiculous power bids aside, I set about my serious transfer business. Regardless of the squad at my disposal, I have two top transfer targets, targets that I will stop at virtually nothing to acquire. These are the two men that I want – nay, need – in order to be truly happy with the way this challenge goes. Those men are CM legends Tó Madeira and Andri Sigþórsson.

As far as I’m concerned, Madeira and Sigþórsson are the keys to CM 01/02. There are plenty of others – and we’ll come to them – but in all the time I spent playing the old CM games, these two were my most consistent goalscorers at every level. If I get them both, everything else will be elementary. Even one of them will probably mean promotion. In Division 3, they will be gods among men. I summarily submit £100k bids for both and hopefully await responses.

My next port of call is to look up some current, real-life legends to see what they’re up to. Leo Messi doesn’t exist in my version of the game – he was only about 14 at this point – but my second search throws up an interesting result…

I check, and it’s actually him. What he’s doing without a club is beyond me, but I manage to keep that thought to myself. Ordinary stats, but an extraordinary name – I care not that he may never develop into anything. The fact that he’s on a free is enough incentive for me. I casually ring his mum and offer a ten-year contract.

Now that I’ve whetted my appetite with some wild transfer bids, it’s time to assess my actual playing squad. The only shining light is Greg Lincoln, recently arrived from Arsenal. He plays as a Midfielder –Right (MR), which is no good for the narrow 4-1-3-2 formation I plan to use. However, he’s young, he’s (presumably) eager to impress me, and he’s got 20 for Passing – the same as Zinedine Zidane. For reference, Xavi, Rivaldo and Luis Enrique only have 15. I begin retraining him as a centre-mid (MC) and shove him on the right of my midfield three with unreasonably high expectations.

The rest of my squad are very little to write home about. They’re a hard-working bunch, most of the squad having >12 for Team Work and Work Rate, with more than half at 15+. So, at the very least, I will expect maximum effort. On the flip side, I’ve only got one striker (Duane Darby) who can shoot and one defender (30-year-old Jim Rodwell) who can tackle. John Dempster looks to be a promising young centre half who could do a job, but otherwise I’d say the entire squad is expendable.

Particularly my goalkeepers, Tony Pennock and Billy Turley (Handling 11 and 10 respectively). Turley is a bit of a lower league legend and made over 200 appearances for the Diamonds in the real world, but it’s fair to say I’m in the market for upgrades. Pennock, on the other hand, fills me with zero confidence. Acceleration 1, Team Work 1, Work Rate 1, and he’s pushing 31. Sorry, Tony. It’s the glue factory for you.

After washing my eyes out with bleach, I move back to the transfer market and desperately look for reinforcements. I have a £6m transfer limit but can only pay £5,000 in wages – still massive for a Div 3 club, but unlikely to let me compete with other clubs for actual professional footballers. I remember there being a few good former international players on free transfers, so I set about making some pretty hopeful contract offers. Taribo West, Pep Guardiola, Davor Suker, Robert Jarni, Cesar Sampaio, Javier Margas, Lionel Charbonnier and Karlheinz Pflipsen instruct their agents to start writing rejection letters.

Blackburn and Dundee Utd legend Billy McKinlay (32, DMC) is the only free agent whose wage demands are within my budget, and since I’ll need a defensive midfielder for my formation, I push a
wad of cash across a table towards him. I also fax a contract to Jeff Kenna because I only have one senior right-back, Tarkan Mustafa, who is absurdly fast (Pace 19, Acceleration 18) but not much else.

I feel so bereft of decent options that I even take a look at John Scales. I let out a small yelp.

I decide to stop messing around and start looking for the legends that I know can be found in CM 01/02, particularly in Scandinavia. I try my best to remember as many names as possible and end up with bids for:

I also make a bid for Falkirk’s dark, soulless destroyer of men, Mark Kerr, but with very little optimism. In all my years of playing 01/02 I’ve never known him to leave for less than a Premier League club. Right. I’m going to press continue, and maybe have a little lie down.

Instantly, there is news. My bid for Teddy Lucic is accepted, but he has no interest in leaving AIK. I tearfully thrust cash at him anyway. My bid for Eldar Hadzimehmedovic is also accepted, but he slams the door in my face immediately. I highly doubt either will be coming. It’s a knockback, sure, but it’s not terminal. My thousand or so other bids must surely bear fruit. Surely.

Next, some slightly unexpected news. West Brom bid £22,000 for John Dempster. Considering that’s his exact value, he’s my only real youth prospect, and they’re two divisions above me, I tell them I’ll take £250k. We’ll see what they say.

Lots of other competitive bids go in for the players I’ve gone for, which doesn’t worry me, until I see that Braga are in for Tó Madeira. My heart stops for a moment. I’ve outbid them by a long way, but if they get an offer accepted, I’m sunk. I need that man in my life. I hold my breath while also letting out a strange throat sound.

Then, my afternoon takes a further turn.

I’m going for a walk.