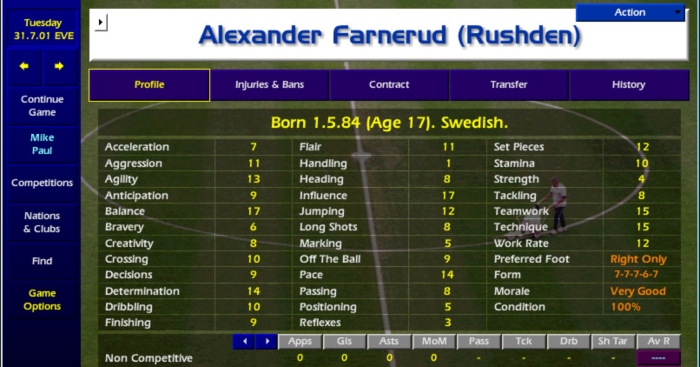 In our first episode, Mike Paul loaded Championship Manager 01/02 and took over Rushden and Diamonds. Then he signed Ronaldo on a ten-year contract. Read those and then come back here…

With pre-season over and the Division 3 openers looming, the first thing I do is bolster my scouting team to the maximum compliment and send them off to find me some diamonds I can spit-shine and turn over for a profit in a year’s time. I assume they won’t just be sunning themselves on the beaches of Europe and South America like I would.

I then ask for scout reports for lots of new defenders – too many to write about individually, but I’ll keep you posted. I might have also sent someone to have a look at Sir Les Ferdinand, as if we need to. I check my shortlist and note that I still have 40 active bids for players, some of whom are defenders, so I decide I might have things under control after all and hit continue.

Hitting continue was a stroke of genius. I’ve been courting a young defender by the name of Pa Modou Kah – never heard of him myself, but I read about him during my pre-game research into CM 01/02 superstars. In the Premier League, his stats would be fairly average. But in Division 3? He can have a few games at right back. £1m is a pretty penny, but he’s 21, can play in lots of positions, is quick, brave, and aggressive, and already has a Norway cap. I’m going to call this an investment and hold my breath for  we months.

And then. Brace yourselves. It’s comfortably the biggest news of this adventure so far.

Our first CM01/02 legend is secured (sorry, Cristiano). Alexander Farnerud is broadly considered to be one of the Champ Man greats, and for another cool £1m, I’m finally happy. I still don’t have a decent left back, or centre backs, and my best pre-season striker can’t legally open a bank account, but at least I have another midfielder who doesn’t quite fit into my preferred formation.

And speaking of which, we wave un-tearful goodbyes to Simon Wormull and Andy Burgess. Despite the fact that I know Burgess is a good player in Division 3, and Wormull’s stats aren’t awful, there is no place for them in my strictly wingerless regime and so I decide to take some money instead. A commemorative soap basket is sent to their widows.

The revolving door at Nene Park begins to smoke as we welcome Portuguese ball grabber Hugo Pinheiro for just £100k. The perfect youngster for Bernard Lama to take under his erratic wings.

Margas doesn’t get his work permit, which means I’m still facing the prospect of starting the new season with my original centre-halves. Warburton and Peters have good influence, they’re determined, brave and strong. But they’re slow, they’re old, and they can’t tackle. We might survive a trip to Aggborough, but this isn’t going to do for the whole season. It might be time to go nuclear.

I resubmit bids for every expensive Scandinavian wonderkid on my shortlist, go scouting for everyone on a free transfer with Tackling >14 and Determination >10, and prepare for our first away trip of the season. I just realised I haven’t organised any training sessions or done any scouting on the other team. I guess this whole thing rests on my team talk. There are no team talks in CM01/02!

He doesn’t score, and we are not great. Kidderminster make more passes, win more headers, have more shots on target, and are just generally better than us. Ronaldo and both my centre-halves get sixes. Farnerud and Brandon are decent running from midfield but mostly are we are grateful to Pinheiro in goal, who picks up the man of the match award on his debut. Not a good start. Pre-season was a lie. I should probably work on being a much, much better manager.

Greg Lincoln, just back from his injury, immediately starts whining about a new contract. 20 for Passing doesn’t get you an automatic pay rise, Greg. Now get back out there and bring the nets in.

Göteborg want £3m for Fredrik Risp. He’s a CM legend, for sure, but that’s a lot of money. I’ll see if I can plug our defensive holes with other reinforcements. First up: Celtic’s John Convery for £190k. He’s not amazing by any standards, but he’s cheap, has good pedigree coming from the Scottish giants, and he’ll provide useful back-up for when I sign some defenders who can actually tackle. Flair 5 is a bit high as well. I prefer my centre-halves to be as close to zero as possible.

Greg Lincoln moans about training again. He’s also unhappy with his ‘role’ at the club despite only being in the building for three weeks. Well, I’ve got something for you Greg. It’s a cab to the training ground of whoever will pay me £500k for you. He goes onto the transfer list and Hull immediately bid. I knock them back because they’re a fellow Div 3 team, and if there’s one thing I know about Champ Manager, it’s that he will put a dagger through my heart at the first opportunity.

My chequebook is on fire, but I can’t get anyone else in before we have to welcome Scunthorpe to Irthlingborough. In the meantime, I’ve hired more coaches, put the players into actual training schedules, and figured out who should be taking each session for maximum effectiveness. I’ve also switched my team instructions to hard tackling and short passing after experimenting with going gentler and more direct in the last game, which categorically didn’t work. I’ve dropped Ronaldo and put Farnerud up front, with Byron Bubb coming into midfield. Convery also makes his debut in place of Peters. Scunthorpe have got lots of nice, important injuries at the moment that I hope will tip the scales in our favour. Come on lads. Let’s get ourselves a W.

We spend the entire first half tearing Scunthorpe apart over and over again. Møller gives us a deserved lead after having five shots on target by himself, Pflipsen has made 50% more passes than anyone else on the pitch, Farnerud hits the bar – it’s a battering. Scunthorpe ‘keeper Steve Crousden is on a 9. And of course, Scunthorpe put in a single cross and equalise, so we go in 1-1 at half time. I plug in my largest hairdryer and point it at my defenders.

We come out firing in the second half exactly the same way as we did the first. Bubb and Brandon both step up their games, drifting regularly into shooting positions, but Crousden seems unbeatable – until suddenly, his resistance is broken. Bubb hits a third low drive of the half, the keeper spills it, and Brandon snaffles up the rebound to put us 2-1 ahead.

Once more, it’s no less than we deserve. Scunthorpe are doing and offering nothing, and the game looks to be over – only further heroics from Crousden are preventing a rout. Then, in the 81st minute, we give away a free-kick a long way from goal. Nobody looks concerned. Neil Somerville steps up and smashes it goalward. Pinheiro flaps his boyish wrists at it, and from absolutely nothing, it’s 2-2. I am steaming, and the players look deflated. I push them into all-out attack mode with a minute to go, chuck Ronaldo on for Farnerud, but it’s surely too late. My heart sinks. I remember why I stopped playing this bloody game. We get a free kick well inside our own half in the 90th minute, and Kah thumps it away. I await the final whistle, and so does everyone else.

Everyone else, that is, except for Chris Brandon, who collects the long ball, dribbles into the box, beats a couple of players, and wallops in a last-minute winner! I explode out of my seat – I can’t believe it. I mean, we utterly and completely deserve it, but I never actually expected to get it. Yes! Three points on the board! I’m SO EXHAUSTED!

We finish with 20 shots on target to Scunthorpe’s four. How we almost drew that I’ll never know – or at least, if this was any other game, I wouldn’t know. Fans of the series will know this feeling precisely, and I have a sinking feeling that I’ll be seeing a lot more Steve Crousdens over the next few months.

Obviously, my weakness is at centre-half. Bringing in Convery did the square root of nothing to improve my back four, but my half-time change did seem to make a difference – pulling Kah into the middle and putting Mustafa at right-back led to the two finishing with 8 and 7 respectively. It’s good to know that Kah at CB might be an option. I didn’t buy him to play there, but the way we conceded in that game, I’ll take any glints of light I can see.

Next up is a glamorous double-header against Hartlepool – first at home in the League Cup, and then, as the fixture list would have it, away in the league. We only have three days to prepare for the cup game and the players aren’t in great nick. All told, including the Scunthorpe fixture, we’re facing a run of five games in 14 days with very little time to recover. It’s time to go heavy in the transfer market.

I put the covering letter I wrote to the board mentioning financial prudence into a drawer, close it firmly, and then meet Göteburg’s £3m valuation for Fredrik Risp. They immediately accept and I offer him a contract. There’s a sticking point over his minimum fee release clause (£220k is absurd) but I hope to push it through within the week. He’s going to cost most of our remaining kitty, but if we get a really solid centre-half in, I would be happy with my transfer business so far. We’ve got goals and plenty of threat in our team going forward, we’ve just got a leaky back door – and if there’s one thing you don’t want, it’s a leaky back door. Patch that up with some mighty Swedish oak, augment the wider squad with a few cheap, reliable hands to get us through the inevitable injury crisis, and we should be able to push the top three.

Yeah? That sounds optimistic, doesn’t it? Fantastic. I’m going to take this bottle of wine to the bath.