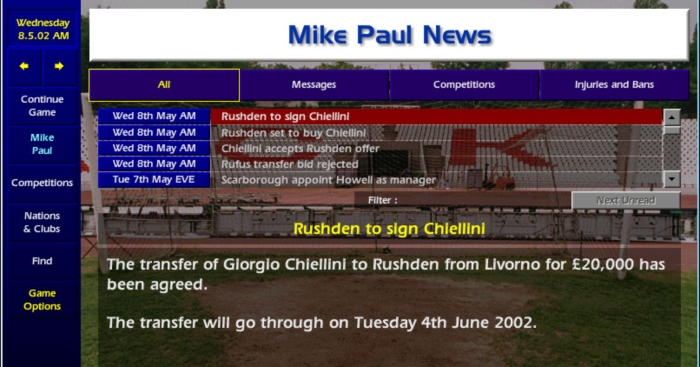 A new season is here. You can read about the triumphant first season right here…

It’s officially the summer. It’s a new day and a new season. I mean, if you’re the kind of riff-raff who have to compete in play-offs to get promoted it isn’t a new season yet, but for the mighty Diamonds, it’s time to sit back and relax for everyone except your erstwhile gaffer. You don’t become the pride of Irthlingborough by going on holidays.

I take a bit of time to look at ‘Interested’ players on my Player Search list, and send my scouts out to tell me how Fairly Good they all are. I then get the bit between my teeth as I realise that there are tons of Scandinavian gems that have either non-promotion or relegation release clauses triggered. I proceed to spend an entire real-life hour looking at every player at every team in Norway, Sweden and Denmark. It takes ages, but yields some value. There’s a brilliant young striker at IFK Trelleborg by the name of Meysam Javan, and it’s fair to say he’s coming off the back of a pretty good season. 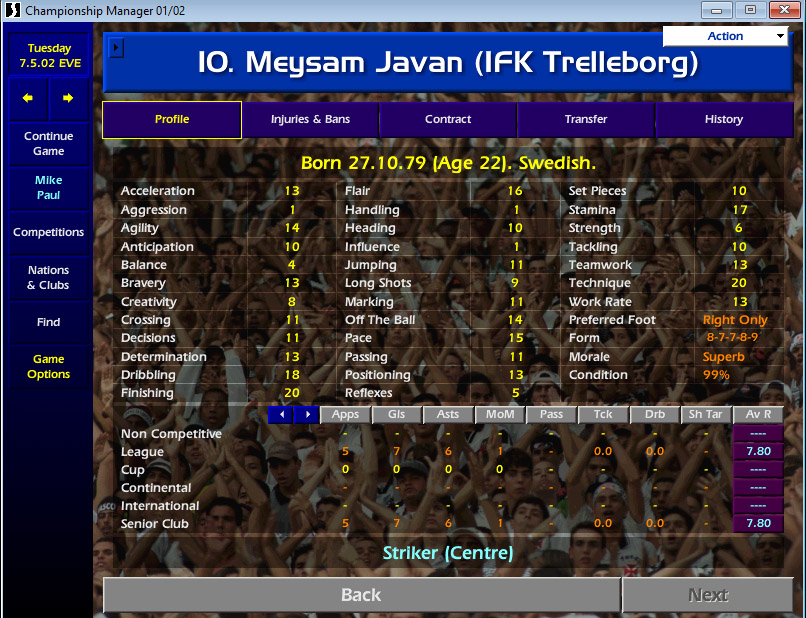 I throw a few bids around, the notable names on my list being Giorgio Chiellini, Joleon Lescott and aged Spanish goal machine Onésimo. And, just a few clicks and some expert negotiating later, we’ve got yet another future teammate of Cristiano Ronaldo on his way to glorious Irthlingborough… 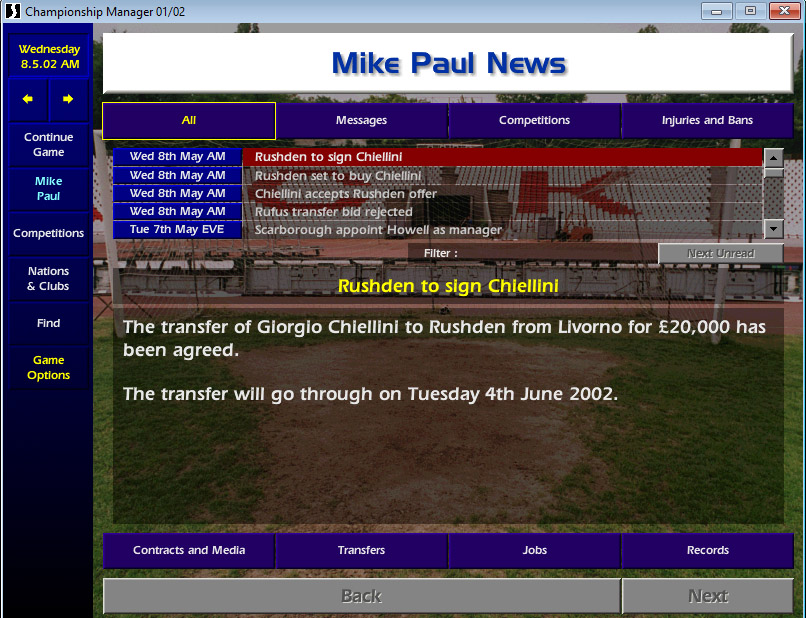 Very decent. I mean, he is quite rubbish, but he can captain my reserves and maybe go somewhere on loan; the important thing is, it’s another household name through the door. And more good news – Trelleborg accept my paltry bid, Javan accepts my miserly contract offer, and he’ll join us in a few weeks too. Duane Darby will be turning in his grave as soon as I’ve finished digging it. Jamie Davies knocks on my door to complain that he wants a new contract. He only wants £375 per week and is happy to stay as a hot prospect. I duly oblige. I also extend the contract of Richard Gough for another year to try to convince him not to retire – he has been a colossus at the back for us this season and I can’t bear to let him go. However, uncertain about how to handle Underwood’s contract stalemate, I redouble my efforts to sign a replacement left-back in case the whole situation goes south. Dundee Utd’s Jim Paterson is of great interest, but at £1.1m, also comes at great expense. I decide to wait until the summer to see if we can pick up any legendary free transfers, and also chuck another bid at Cheltenham for Jamie Victory just in case. I also note that Phillipe Mexès is listed for loan at Auxerre, and set myself a reminder to text him some sweet nothings once the transfer window opens.

A vastly overpowered PSV Eindhoven overcome Real Madrid in the Champions League final, thanks to a single Adil Ramzi goal. How the other half live. The media ask me about the potential of Freddie the Fence, to which I answer that he should be a quality player for years to come. He comes to thank me privately for my kind words, to which I reply, “what’s your minimum fee release clause, Freddie?” He tells me it’s £5m. I set about renegotiating his contract immediately.

My scouts recommend Ashley Dodd at Port Vale; he’s a DMC who isn’t seeing much action in Stoke-on-Trent. They reckon he would be an excellent prospect who could make an immediate impact, and if that’s not worth £70k and a new pair of trainers, I don’t know what is.

Plus, after a bitter campaign marred by controversial usurpers like Joe Kinnear and Steve Parkin, I am finally given my Third Division Manager of the Year award. I won six out of ten of the monthly awards, for goodness’ sakes. They could have given it to me in January. I place it proudly into the space I’ve been keeping in our Ikea trophy cabinet, and to celebrate, I release Shaun Carey on a free transfer. Bye, Shaun. You should have stayed at Norwich. Suddenly, the transfer window opens, and in come all my newbies: 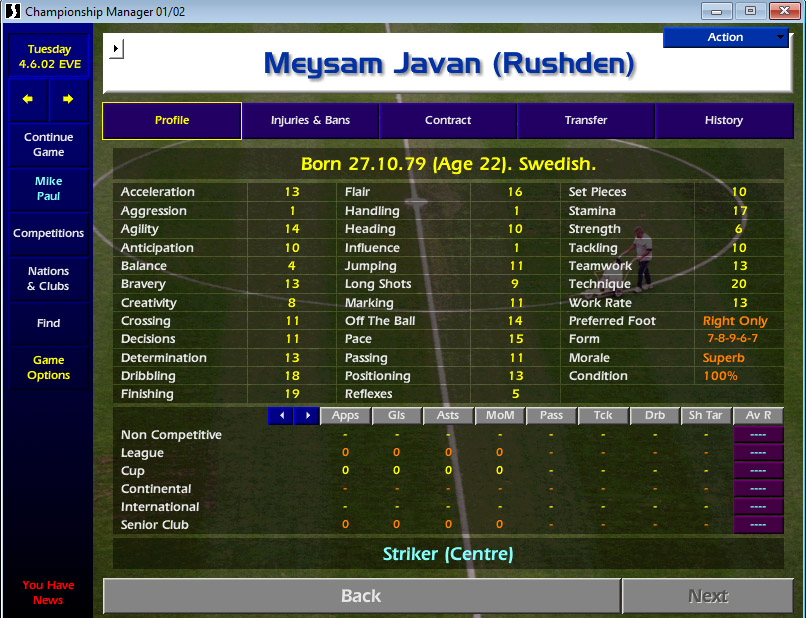 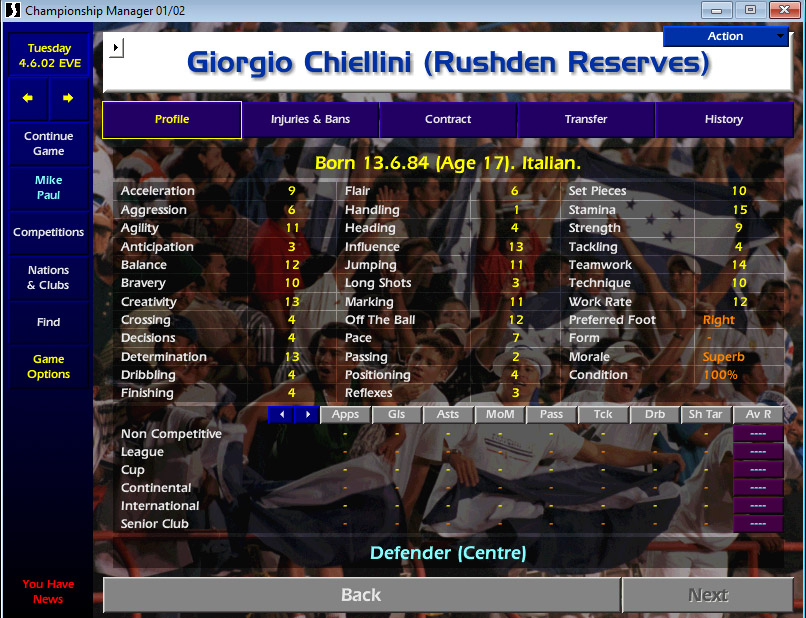 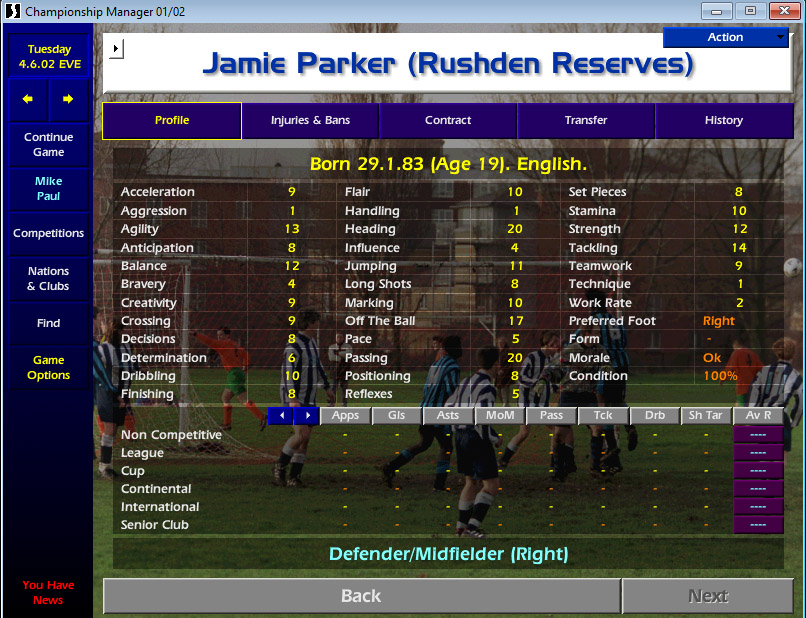 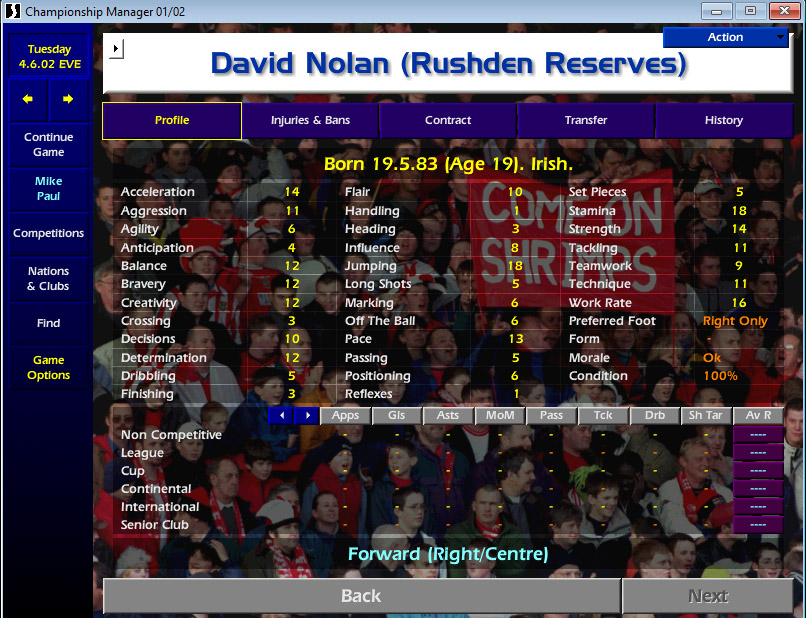 Parker and Nolan were both youth players on free transfers that were recommended as ‘excellent’ prospects by my scouts. Always unable to resist a bargain, and as both are young and have plenty of time to develop in the stiffs – along with having some decent attributes for teenagers – I snapped them both right up. Parker will provide great cover for Mustafa at RB, and Nolan… well, I haven’t quite figured out what my scouts see in him yet but I’m sure some time in the reserves will make it clear.

All of a sudden, my rivals start putting in bids for my heroes. First it’s Ibrahim Said, who’s being courted by Ipswich Town. I match their offer, but he unceremoniously tells me that he’s not interested. FINE. Then, Bristol City offer a contract to Teddy Lucic the same day his six-month expiry window opens, the utter bastards. I also make an offer, but since he’s been turning me down for a year, I don’t see why he’d be open to one now. Then, bloody Crewe jump onto Hannu Tihinen! Is it open season on all my favourite centre-backs? I also match their offer, even though I really can’t afford to, and he also tells me that Irthlingborough isn’t on his travel bucket list. Oh, but I suppose Crewe is, Hannu? You traitor. I could have loved you.

There is other, more exciting transfer news. Firstly, my scout at the World Cup recommends a gentleman by the name of Marcel Mahouvé. Now, I don’t know much about much, but I know an ugly, nasty bastard when I see one. And this man, this monstrous DMC from Cameroon, looks like he stalks the dreams of attacking midfielders and eats nail omelettes for breakfast. Better still, he’s unhappy at Montpellier, and they say I can have him for £600k. As a position I’d like to strengthen, I wholeheartedly accept, and offer him a contract that should meet his pretty reasonable demands.

I also manage to get an end-of-contract deal done with a man who comes so highly recommended I had to beat away competition from four other clubs for his signature: Morten Knutsen. Now, I know what you’re thinking. Where on earth is an ML going to play in my formation? Well, my friends, you can be sure that I’m going to retrain him as a DL and have myself a tasty new wing-back on my hands by the end of the season. And if he turns out to be another Greg Lincoln who refuses to be retrained and sulks, I will be able to sell him easily for a tidy profit. Watch out, whatever Paul Underwood’s agent’s name is. Your extortionate contract demands won’t wash with me, whoever you are. 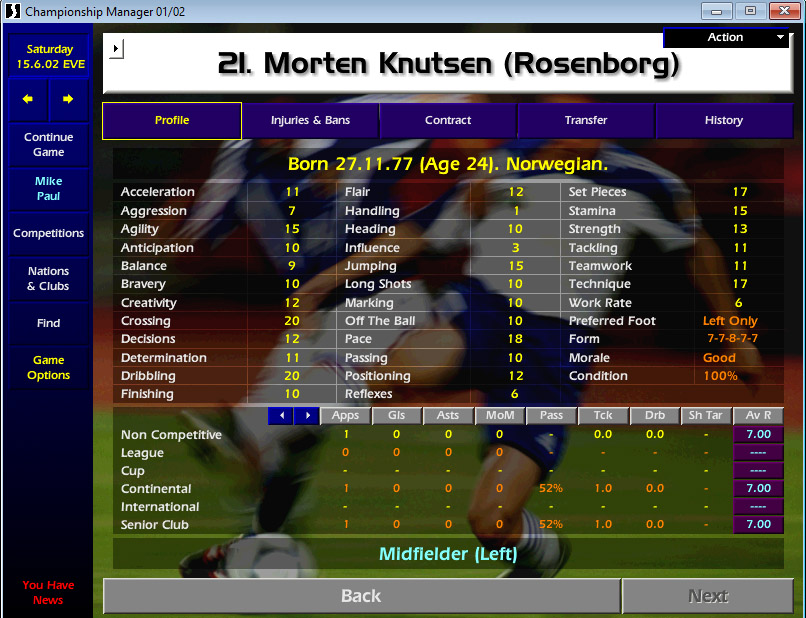 In truth, the Knutsen transfer is because I’m really struggling to find a decent left-back who’s worth the money their club wants, and would actually upgrade on Underwood. I should still have the chance to grab a free transfer on 1st July (I’m looking at you Denis Irwin) and if not, Underwood can keep playing and I’ll just get someone in on loan. I’m not worried, you’re worried.

Fulham make a £120,000 offer for Chris Brandon, in a move that really knocks me sideways. I get up, dust myself off, and tell them I want £1m or they can sod off. Middlesbrough also look interested. Oh, Jesus. Don’t leave me Chrissy.

Having said that, in the same movement, there’s more great news. Mahouvé accepts my contract offer and is now awaiting a work permit. I pray that he gets it – I can’t wait to show you his stats in Rushden colours. Plus, I pick up a superb Nordic prospect – and it’s another Andersson! Mattias Andersson to be precise, recommended highly by my scouts, and plucked from Mjällby for only £18k. I see bright things ahead for this one – only 20 years old and already 20 for Off The Ball? He’ll do well making those completely untracked runs from midfield. Welcome, lad. 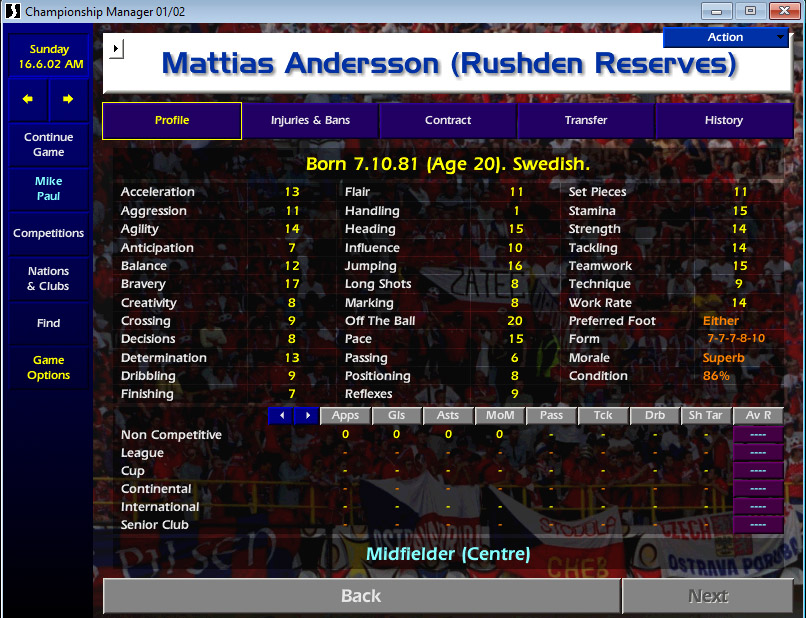 The next club who try to poach one of my shining stars is Rotherham, who bid £200k for Byron Bubb. It’s more than his value (£160k), but they’ve obviously got to be joking. I whack his asking price up to £2m and see if they, Sheffield Wednesday and West Ham are still interested afterwards.

They are. Goddammit. However, Fulham baulk at my £1m asking price for Chris Brandon and slither off into the long grass. Boro claim they’re still interested, but we’ll just see about that. I want to try to keep this band together as much as I can. After such an immense season, I’m not letting anyone go for anything less than Bill Gates money.

Right then – let’s finish up today with some end-of-season awards. Sir Les Ferdinand is the winner of Fans’ Player of the Year, according to my news items, and he’s certainly a strong contender. The only player in my squad with an average rating over 8 – a quite absurd 8.17 from 43 games, no less – Sir Les has been worth every penny of the £500k I paid for him. But who’s your Player of the Season? I’ll put a poll on my Twitter page and we’ll have ourselves a vote using the players I arbitrarily decide should be considered. In our alternative dimension, Sir Les is coach and Director of Football at QPR, so if he wins, perhaps I’ll be able to present him with his award in person… 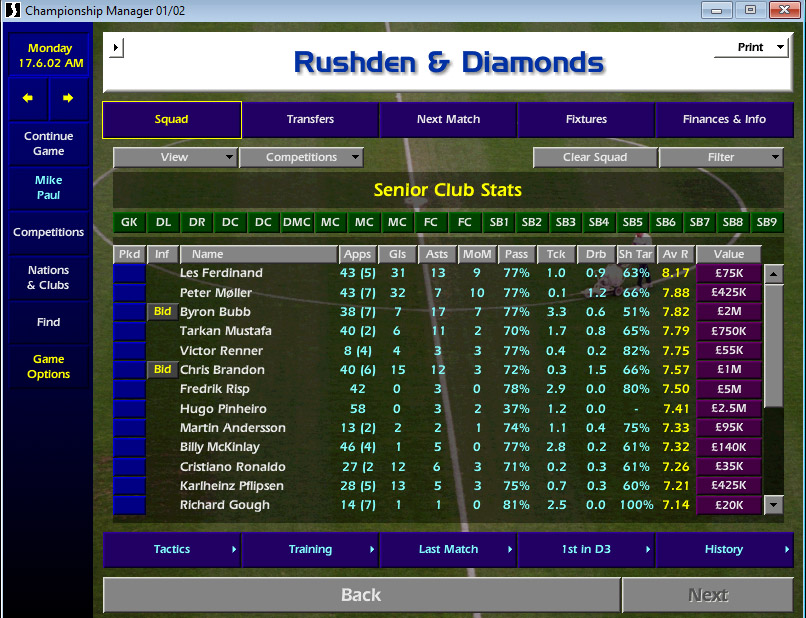 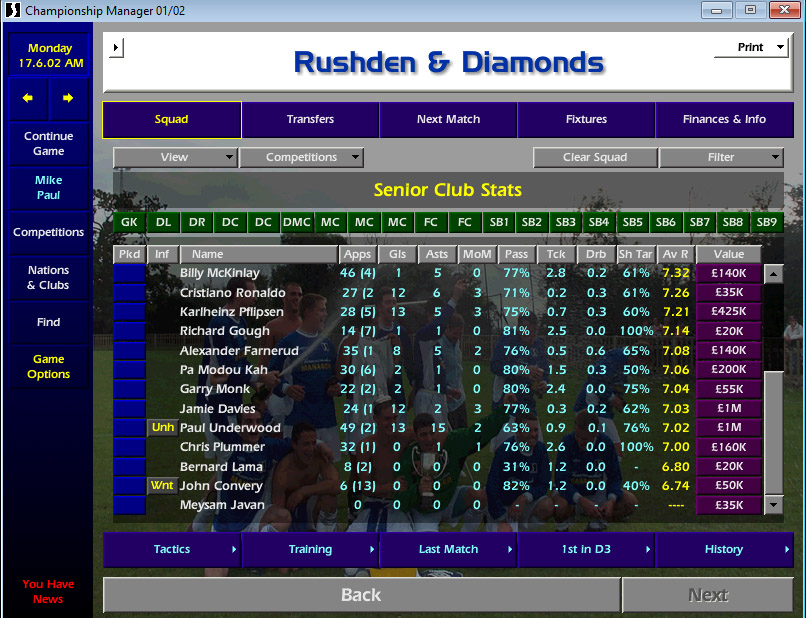 Mike Paul – buy him a coffee, give him some sponsorship, do what you can…