Home Mediawatch Did we miss Varane and Trippier announcements? 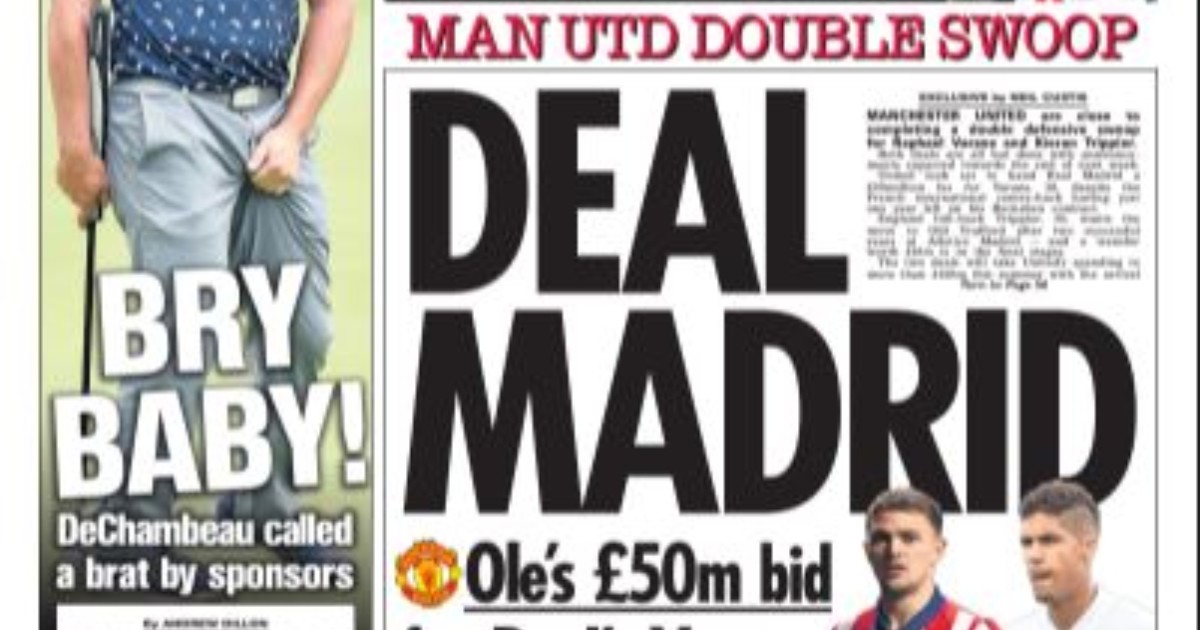 Roo the day
Warmest congratulations to crisis management expert and PR man Ian Monk, who has managed to hijack the front pages of The Sun and the Daily Mirror and somehow persuade somebody that these words – ‘WAYNE ROONEY called the police after photos emerged of him in a hotel room with three scantily clad women’ – could be written with absolutely no irony. Well done that man.

But best of all is this line on the front of the Daily Mirror:

‘There is no suggestion that family man Roo, 35, acted inappropriately and it is believed the snaps have been reported as a possible crime.’

Indeed. Who could possibly think it were inappropriate that a 35-year-old married father of four invited a group of 21-year-old girls to the VIP booth of a Manchester club and then went back to their hotel room with them? Not us and definitely not our lawyers.

‘There is no suggestion that proud family man Rooney did anything untoward or behaved inappropriately.’

Have a look on Twitter, guys. There was definitely some suggestion.

Friendly fire
Manchester City won the Premier League and Carabao Cup last season and reached the final of the Champions League so it is definitely time to declare them the first big crisis club of a season that starts in three weeks. If anything, The Sun have waited too long.

‘CITY’S PLANS ALL AT SEA’ claim the newspaper, who say that ‘Pep Guardiola could really do with a boost right now’ because they have 11 players still missing because of their involvement at Euro 2020 or Copa America. And that is a full ONE player more than is currently unavailable for Manchester United – who finished 12 points behind them last season – so that really is a right royal mess.

‘So boss Guardiola could be forgiven if he was feeling a bit lonely and fed up as he prepares his squad for their ONLY traditional pre-season friendly tomorrow night.’

That really is worrying. It would clearly be so much better to be Manchester United and be able to lose 4-2 to Championship side QPR in a friendly with this line-up: Heaton, Wan-Bissaka, Tuanzebe, Mengi, Williams, Matic, Andreas, Pellistri, Lingard, James, Greenwood.

Guardiola must be looking on enviously at Ole Gunnar Solskjaer being able to play a team containing a full one of his first-choice XI. The grass is so, so much greener on the other side of Manchester.

We will hand over to The Athletic and Sam Lee for the punchline:

‘City should be in better shape heading into the 2021-22 campaign compared to last season, when they played no official friendlies and relied only on an inter-squad fixture at the Etihad Stadium.’

Kane and able
And of course this desperation in The Sun to claim that Manchester City are in a mess and desperately need Harry Kane (‘a couple of high-profile new faces may prove to be a tonic’) is absolutely not connected to Friday’s front page.

Odd that the mystery figure of £160m appears nowhere in Monday’s coverage.

Done deals
On the back page of The Sun, there is a claim – clearly briefed by the club – that ‘MANCHESTER UNITED are losing patience in their pursuit of Real Madrid centre-back Raphael Varane’.

Which is confusing because we were told in absolute terms by Neil Custis of The Sun that both Varane and Kieran Trippier would be United players by now. Did he learn nothing from the Jadon Sancho farrago?

Clearly not because this is what he wrote on July 17:

‘MANCHESTER UNITED are close to completing a double defensive swoop for Raphael Varane and Kieran Trippier.

‘Both deals are all but done with announcements expected towards the end of next week.’

We’re now well beyond the end of last week and neither deal has been announced. On the contrary, the ‘all but done’ deal for Varane now looks in massive doubt, while there has literally been no mention of Trippier in recent days.

Custis on July 17: ‘Varane’s representatives are understood to have negotiated terms over a five-year deal.’

Martin Blackburn on July 26: ‘Personal terms have still not been agreed.’

Custis on July 17: ‘United look set to hand Real Madrid a £50million fee for Varane, 28, despite the French international centre-back having just one year left on his Bernabeu contract.’

Blackburn on July 26: ‘The Spanish giants…are demanding up to £60m for the former Lens defender.’

‘All but done’, Mediawatch’s arse.

There is some serious Manchester United PR afoot right now – presumably timed to quieten any questions about giving Ole Gunnar Solskjaer a new contract – with the Manchester Evening News leading the way on Sunday:

Manchester United have signed just one player, so this is something of a surprise, especially as one of those priorities was to end ‘the uncertainty surrounding Paul Pogba’ and the one thing that is absolutely certain about Pogba right now is uncertainty.

The Mirror website take up the mantle, via – quite aptly – their Sports Agenda Writer Chris Doyle:

We learn that ‘United are already seeing the benefits of his work behind the scenes during his first transfer window at the club as director of football’ because of the Sancho signing, and it does not end there…

‘The transfer chief has already started looking at other areas United can strengthen in as they target a center-half to partner Harry Maguire in defence.

‘Raphael Varane has emerged as their number one target and the club have been proactive in trying to get a deal done sooner rather than later, instead of letting it linger on.’

Cut to the back page of the actual Daily Mirror just hours later:

It’s definitely not lingering on, so well bloody done John Murtough. And that just leaves one thing:

‘United will look to sell Pogba instead of keeping an unhappy player and let him walk for free this summer.

‘And this decision is another example of Murtough’s decisiveness and making the right calls for the club, even if sometimes they are the difficult ones to make.’

Yes, and making the decision to sell Pogba is clearly the hardest part of Manchester United’s summer, alongside ‘trying to get a deal done’ for Varane. Murtough has very nearly delivered the perfect summer.