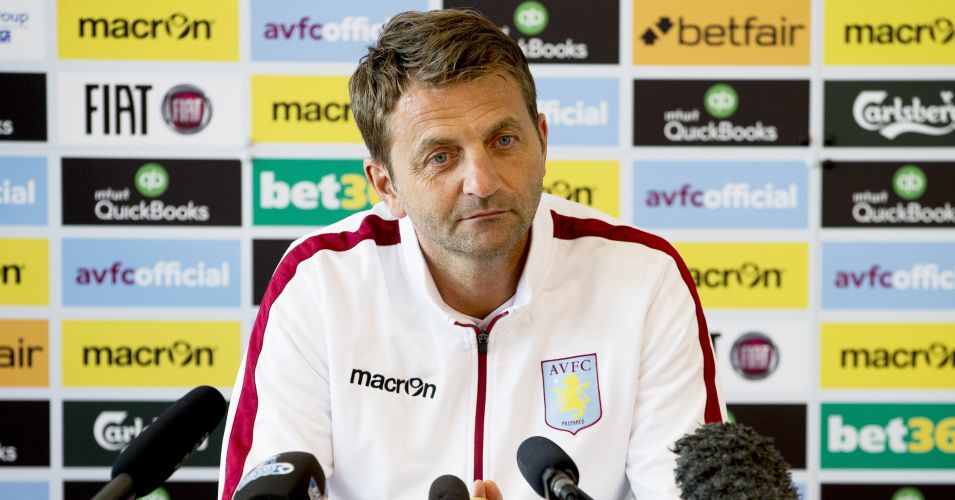 We are finding it a tad hard to believe that a Premier League manager’s plan against Championship opposition was to let them think they were much, much better…

When Alex McLeish is in the Sky Sports studio baffled at the amateurish nature of Aston Villa’s first-half performance, you know things are going badly. One shot on target badly. Just 72% pass completion badly. Hit hopeful/hopeless balls towards the head of Rudy Gestede (who has defiantly not got a good touch for a big man) badly. Dwight Yorke seemed almost close to tears as he talked about a basic lack of quality in a Villa side playing against Championship Birmingham and looking very much second best.

Centre-half Ciaran Clark was predictably lost in midfield (while actual midfielder Carlos Sanchez was sat on the bench), the ball was bouncing off Gestede, Scott Sinclair was continuing his love affair with hitting the side netting from a very tight angle and Gabby Agbonlahor looked like he was playing with the weight of all his ladyfriends on his back.

So that experiment hasn't worked. Villa have been utterly atrocious. Like, incredibly bad

At half-time something had to change. And it did. Agbonlahor came off for Jordan Ayew, while Joleon Lescott was substituted and replaced by Jack Grealish, who entirely changed the match by moving in between Birmingham’s lines, linking with Ayew and wonderful left-back Jordan Amavi and generally playing football. Things were better. Two shots on target (one of which was a goal) better. An impressive 85.5% pass completion better. Not brilliant, not groundbreaking, but much, much better.

We expected manager Tim Sherwood – after being widely criticised for his bizarre substitutions against Crystal Palace and Leicester – to soak up the applause for making positive changes while acknowledging that the first half was truly awful. ‘I fixed it’ should have been the proud boast, and we would have said ‘fair play; he fixed it’.

But no. ‘I planned it’ was the proud boast. Yorke’s distraught face was an absolute picture as Sherwood explained that he had planned to be so utterly terrible in the first half in order to lull Birmingham into a false sense of security. Apparently his plan at home against a Championship side in a derby game was an extended version of rope-a-dope.

“The plan worked,” said Sherwood with a straight face. “We went two different ways. First half, we looked to stretch them out, go very direct.

“Second half, they could not cope with the change. We looked to get the ball down, we popped it around, and found space in between lines. Before you know it, the ball is in the back of the net, because Grealish has got in between lines and flicked it out.

“We always want to play free-flowing football but sometimes you’re not capable of doing that. We let them know that we are willing to mix it up. It wasn’t pretty, we understand that, but we are looking to get a result.

“Second half, I think if you look at the position of their centre-halves, they pushed another 10 yards further back, and they could not adjust.”

So it was a cunning plan. A cunning plan that relied entirely on Birmingham not scoring in that opening 45 minutes when Jacques Maghoma and Demarai Gray failed to convert very good chances gifted to them by Villa’s incompetence. That’s one ballsy plan.

We would happily call bullsh*t at this point but that would obviously look churlish after a 1-0 win. So we will instead leave the last word to Birmingham manager Gary Rowett:

“I have heard Tim said he purposely let us do that in the first half so they could change tactics in the second half but I’m not sure a tactic of getting booed at half-time would particularly be a good one.”