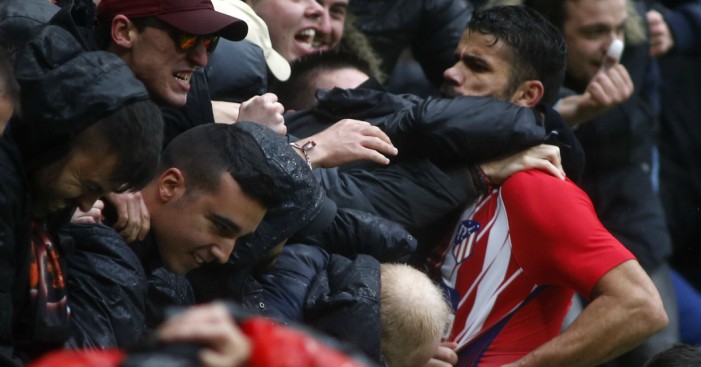 After eight long months in the footballing wilderness, Diego Costa is finally back. His transfer from Chelsea was agreed as far back as September, but Costa had to wait until January to make his return to Atlético Madrid while they served the remaining months of their FIFA-imposed transfer ban. How we’ve missed him.

Costa was given a gentle re-introduction to Spanish football in last week’s Copa del Rey tie against Segunda B side Lleida Esportiu, a game in which he scored within five minutes of coming on as a second-half substitute. His return to the more rigorous demands of La Liga came in Saturday’s game against fellow Madrid side Getafe, his first appearance in the competition since the 2013-14 season, when his 27 league goals fired the unfancied Atlético to the title.

The game took place on Three Kings Day, when Spaniards traditionally give and receive presents, and Costa brought all his usual gifts to the party – goals, aggression and controversy. It was clear from the outset that Getafe had been instructed by manager José Bordalás to try and wind Costa up, and the tactic started to bear fruit shortly after Atlético had gone 1-0 up through the outside of Ángel Correa’s right boot. Costa lost his temper when Djené tackled him from behind for the second time, and he angrily demand the referee show a yellow card to the Getafe defender.

That sparked a melee involving almost every outfield player and, before a tumultuous first half was over, another ruckus broke out, this time involving Diego Godín and Getafe centre-back Juan Cala. Costa took it upon himself to square up to Cala as well, and had to be ushered down the tunnel by Jan Oblak at half time before he could get himself into any more trouble.

Trouble did find him in the second half, though, as his loose arm struck Djené in the face, and the returning hero was shown a yellow card. Minutes later, Cala tried to get Costa sent off by going down clutching his face when both men had challenged for a high ball. A free kick was given against the Spain striker, but the referee correctly kept his cards in his pocket.

Shortly afterwards, Costa, who had shown glimpses of his brilliance in the first half, turned in Šime Vrsaljko’s cross for a goal on his second Atlético league debut. Consumed by joy, he ran over to the crowd behind the goal to celebrate with the fans. Inevitably, the referee brandished a second yellow card for over-celebrating, and Costa’s homecoming was cut short.

Left-back Lucas Hernández said after the game that Costa didn’t know he would be booked for celebrating with the fans as “that rule does not exist in England”. Of course it does exist, and of course Costa knows that. He was surely just overcome with the emotion of scoring on his long-awaiting return to the club he loves, causing him to temporarily forget himself.

It’s that impulsive nature that gives Costa his edge, but it can be a blessing and a curse. His unthinking, instinctive style makes him an aggressive and unpredictable opponent on the pitch, but playing so close to the edge will inevitably cause him to overstep on occasion. The most surprising thing would be if anybody is still surprised.

Atlético manager Diego Simeone isn’t too annoyed though. He accepted that Costa deserved his second yellow, but wasn’t going to censure him publicly, acknowledging that it is this side of his character that makes him the player he is. If anything, Simeone seemed positively delighted to have him back, saying that Costa brings them intensity, strength and a fear factor that they have lacked up front.

It’s true that they haven’t quite been the same since Costa left. He is absolutely the perfect player for a Simeone team, espousing all the qualities that the Argentinian manager demands; aggression, hard work, strength and directness.

Atleti have also been missing this season. Antoine Griezmann has struggled in this role, and has been isolated trying to lead the line for much of the season so far, although he has improved as the season has gone on with additional support from Correa and Kevin Gameiro. The game with Getafe saw the beginnings of what could blossom into a great strike partnership for Atlético this season. Costa’s power, physicality and aggression will be the perfect complement to Griezmann’s more subtle skill and finesse.

Atleti could certainly do with Costa’s goals. They may be second in La Liga, but have only scored 27 goals in their 18 league games so far, 21 fewer than leaders Barcelona. Atlético under Simeone have never been free-scoring, usually preferring to rely on the solidity of their defence, but they are well behind the run rate on goals scored this season, even by their own miserly standards.

Their joint-highest goalscorers this season are Griezmann and Correa, who have scored five league goals each. The addition of a dead-eyed marksman such as Costa should help give Atlético a much-needed attacking edge to go with their defensive shield.

They may have had to wait a long time to get their man, but good things come to those who wait. Diego Costa is back where he belongs. It already feels like he has never been away.