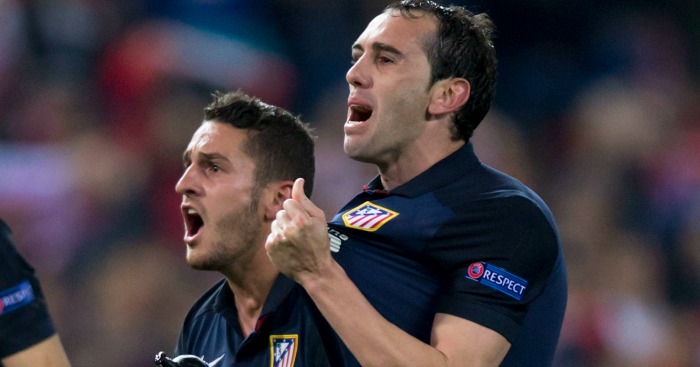 Diego Godin doesn’t really stand for nonsense. When several reports in Spain and England were linking him with a move to Manchester United, his answer was direct. “I’m with Atletico to the death,” he told AS. And that’s that.

Gabi might be Atleti’s captain, but there is no doubting Diego Simeone’s on-pitch figurehead. “Without Godin we lose a leader,” Simeone said when the centre-half suffered a slight hamstring injury in April. “He is a really important man within the group.” Godin missed two away league games in the final two months of the season; Atleti lost them both (at Levante and Sporting Gijon). Four points from those two games and Spain’s other elite club would have won La Liga for the second time in three years. Godin is also a big-game player, and a big moments player too; he scored the goal in the Camp Nou that won Atletico their first league title in 18 years; he scored in the Champions League final in 2014 a week later, the header that came so close to winning the club an astonishing double; he scored for Uruguay in World Cup 2014 to ensure passage into the knock-out stages at Italy’s expense.

The Uruguayan’s celebration of that Camp Nou goal epitomises his personality, pulling frantically at his shirt as he screamed up to the heavens, overcome with joy. It was the reaction, the release of a man who leaves everything out on the pitch. Some defenders see proof of a fine performance in looking immaculate as they leave the field, but Godin is the exact opposite. He is every bit the archetypal ‘old school’ centre-half.

Perhaps that is one reason why Godin is slightly overlooked in discussions of world football’s great and good. Not only is there a growing obsession with judging central defenders on their ball-playing ability, but the noise of Europe’s financially bloated elite manages to silence the claims of anyone else. Sergio Ramos has made FIFPro’s World XI in each of the last five years and Thiago Silva the last three, but Godin has never been selected. There are those in and outside Madrid who believe him to be both the best central defender in La Liga and South America.

It is Godin’s battling qualities that make him so perfect for Simeone’s defence. With the coach happy for his side to cede possession before hitting their opponents on the break, Atletico’s ability to dig in against sustained pressure has become their calling card. Godin has made 16 more clearances than any other player in the Champions League this season – not bad considering he missed the first leg of the semi-final against Bayern Munich. Evidence of his threat in the opposition penalty area comes in the statistic that only four players in the competition have had more headed shots on target. Expect more of the same on both counts on Saturday evening in the final.

That “to the death” reference of Godin’s in the opening paragraph also goes some way to illustrating Atletico’s exceptional achievements over the last three years, and it is something the defender repeated when asked to explain the secret.

“We believe to the death in what [Simeone] and el Profe Ortega tell us,” Godin said. “Simeone always knows how to give the right message or speech that the team needs.”

This is success achieved because everybody buys in; every player and coach is aware that they may never find something so special elsewhere. This interview with Godin from April is almost comical for the number of times team spirit and hard work are mentioned. Real Madrid, Manchester City, Bayern Munich and Barcelona both have a higher standard of individual players, but no elite club in Europe does morale quite like Atleti.

That is reflected in the sales that the club have made, or more specifically the performance of those players who have chosen to leave Atletico. Miranda at Inter, Arda Turan at Barcelona, Mario Suarez at Fiorentina, Filipe Luis at Chelsea, Radamel Falcao at Monaco. The grass is never greener than on the Vicente Calderon’s turf. Toby Alderweireld and Diego Costa are exceptions to an established rule.

This Saturday, Atletico will aim to atone for their extra-time defeat on this stage two years ago. For all the skillful players on show, this will be a physical battle. That 2014 final contained 46 fouls and 12 yellow cards. Expecting anything but a repeat would be foolish. You will get long odds on BetBright for low bookings points.

In Diego Godin, Simeone has the perfect man for such a job. “We don’t have any highlights of him but this guy is a good player,” said Eamon Dunphy on RTE after the semi-final second leg, unintentionally making the perfect point. Godin is the perfect player to channel his manager’s passionate extremes. Or, as his manager could say before kick-off in the San Siro on Saturday: “Do as I say. Do as he does.”