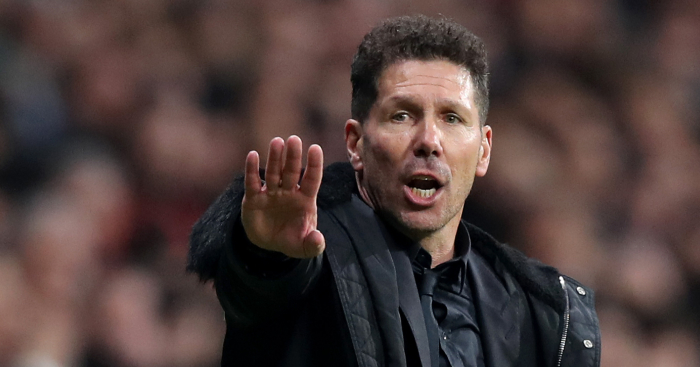 Diego Simeone has admitted he is aware of the problems teams can face when playing Liverpool at Anfield, but says he will not offer many surprises as Atletico Madrid try to maintain their advantage from the first leg of their Champions League Round of 16 clash.

A home win three weeks ago gives them something to hang on to and throughout his career as a coach Simeone has produced sides which are masters at defensive resilience.

“I think it is one of our qualities; it is a very solid quality we have,” said the Argentinian, who has won two Europa League titles and been to two Champions League finals during his time in charge.

“If I tell you my plans for the game it wouldn’t be logical. I think they (Liverpool) know how we will play after eight years of being here.

“We have to keep what we can during the game. Some managers will say ‘we are going to get forward’. That would be a nice pleasant dream.

“But all the thoughts I have before a game it is down to how much you are motivated on the field.

“Opponents might make you suffer at times in a game, they (Liverpool) have always played almost always with a high line.

“It will be a tough opponent with lots of ways of hurting you in attack. Experiences in life always help you but you have to make sure you don’t repeat mistakes.

“We almost always compete really well at a high level. Tomorrow the game will demand that we are on top form. We think we can hurt them.”

There is a minor fitness doubt over former Real Madrid and on-loan Chelsea striker Alvaro Morata but Simeone is confident he will be ready.

“We will look at him in training and we will see how he is then,” he added.

“You know pretty much what I will be doing. I don’t think our line-up will be far off from what you think it might be.”

Liverpool overturned a 3-0 deficit in last year’s semi-final to beat another LaLiga side, Barcelona, at Anfield last May and the Atletico boss is well aware of how the atmosphere there can be an advantage.

“I’ve never played here as a manager or a player but it is an amazing stadium and you can tell on the TV the fans are amazing and get behind their side,” he said.

“They have had some historic results here, turning matches around, great comebacks.

“But obviously it is not just the fans that drive them forward, it is also the good teams they have had over the years.”