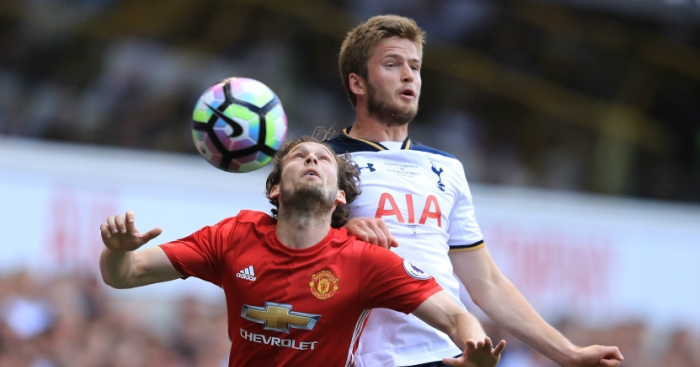 Eric Dier insists that interest from Manchester United “never did turn my head”.

Tottenham midfielder Dier was a transfer target for United in the summer, and Mauricio Pochettino complained in his recent book that Jose Mourinho had unsettled the England international by talking to him after a game between the two clubs last December.

“What needs to be clarified is that this is something that happened last Christmas,” Dier explained to The Times. “The book is a very honest account, and it’s nice for fans to have that insight about what goes on, that it’s not all lovey-dovey, but context is important.

“This was last Christmas. The book has come out now, so it has resurfaced, but for a long time my relationship with the manager has been great. It’s always been very good. Obviously, you can’t see eye-to-eye on everything, but if anything our relationship is stronger for what we went through together.

“The manager’s point of view was [the friendliness with Mourinho] was disrespectful to him. [The dialogue] was more him getting that message across than me getting my message across.

“I grew up in Portugal. Portuguese people are very proud and it’s a small country. It doesn’t have the economic power of a country such as England, so people like Mourinho, Ronaldo, they’re extremely proud of it. Growing up there I was within all that, you know? I didn’t want to be disrespectful to anyone. I completely understand where the manager was coming from but I believe I was stuck in the middle of something I couldn’t really affect.”

Pochettino felt that the conversation Mourinho had with Dier derailed the player’s form, but Dier himself puts his New Year slump down more to fatigue than anything else.

“A crazy amount of games,” he said. “I’d never played anywhere near that amount and the Euros, though ending badly, was an incredible experience. After that you have a very limited holiday and when I returned for pre-season my mindset wasn’t right. I was mentally tired. I wasn’t ready to put my whole body into it again.

“It probably took six months — January, February — for my football to get better and a lot was my fault, my attitude, and that didn’t have anything to do with Man United.

“I just didn’t have the commitment, the workrate I should have had, and communication with the manager about the whole situation wasn’t good. But never did Man United…never did it turn my head. I was never thinking, ‘I need to go.’

“There was so much to it and everything accumulated and was like a big snowball and that’s where it ended up exploding. If we’d communicated better we’d have avoided that. I learnt so much from the whole experience and I think the manager did as well.”