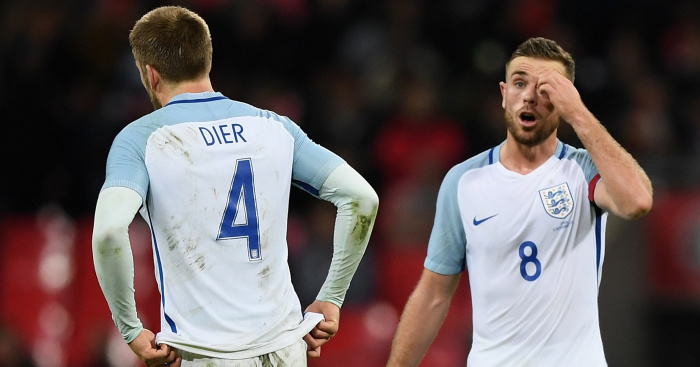 It doesn’t feel like a question to which anyone could provide a particularly forceful answer.

Even the famously calm and thoughtful Liverpool support would surely struggle to launch too impassioned a defence of their man, while Spurs forums after any poor result are a swamp of ‘WHAT IS THE POINT OF ERIC DIER?’ threads, in among those demanding Serge Aurier never be allowed to play for the club again.

It’s not the most exciting or inspiring selection decision a manager has ever had to make, but it’s one of very few that still faces Gareth Southgate ahead of England’s opening match in Russia on Monday.

Southgate’s quietly impressive clearing of the low bar set on his arrival in the England job has seen a slow, steady evolution of his team. Having managed to shuffle ageing press favourites such as Wayne Rooney and Joe Hart off stage left with minimal fuss while making other senior players such as Gary Cahill prove they still deserve to be in the squad, things have slowly but surely been falling into place over the last 12 to 18 months.

Qualification for Russia was secured safely yet unremarkably from a pretty straightforward group. England rarely dazzled, but nor did they ever look like missing out on automatic qualification.

After getting to Russia, England played two pairs of friendlies. Goalless draws against Germany and Brazil were followed by a 1-0 win over the Netherlands and a 1-1 draw with Italy. Again, worthy results, yet unremarkable.

Both players have their merits, but while making England solid the two of them together too often made England stodgy.

But Southgate’s big epiphany – the tactical devilment many doubted he had in him – in moving Kyle Walker from right-back to the right of a back three has changed things at both ends of the pitch.

There is no longer any need for both Dier and Henderson to be sitting in front of three centre-backs, winning the ball back and passing it sideways.

Walker’s switch into a back three could still go wrong. It certainly makes England more vulnerable at the back, with a couple of dicey moments in friendly victories over Nigeria and Costa Rica. But it has freed England as an attacking force, allowing them to get four genuinely attacking players on the pitch to go with a couple of marauding wing-backs.

Henderson has become a more dynamic, forward-looking midfielder under Jurgen Klopp but my vote still goes to Dier.

He is the more defensively-minded of the pair and, with only one of them on the pitch and the likes of Kane, Sterling, Lingard and Dele ahead, that’s absolutely fine. He’s also more comfortable than Henderson slotting in to Walker’s left to form a makeshift back four should the wing-backs get caught up-field.

And while he’s the sort of player who looks like he offers more goal threat from set-pieces than he actually does, he’s still popped up with a couple of very useful goals for England.

A look at England’s likely starting XI also suggests that it is Dier rather than Henderson who will have the greater understanding with his team-mates.

Germany and Spain have shown the value of a core of players who play together at club level and while it’s definitely true that Tottenham are not Bayern Munich or Barcelona, it’s equally true that England are not Germany or Spain. Tottenham are more England’s level, and putting Dier into a side alongside current team-mates Kieran Trippier, Dele Alli, Harry Kane and possibly even Danny Rose – as well as former colleague Walker – just looks like common sense.

Dier was also probably England’s best player at Euro 2016 before it all went quite spectacularly wrong against Iceland, but he still turned up at a major tournament and exceeded expectations. Lord knows few enough England players have done that in recent years.

Dier is not a massively exciting player; he’s not particularly good at any particular thing. He confuses and infuriates many, and he still looks like he’s stumbled into football by mistake and should actually be playing fly-half for Bath.

He’s not going to win the World Cup for England, and it might not even make any difference whether it’s him or Henderson that gets the nod to mop up in front of the defence and behind what is suddenly quite an exciting array of mobile, attacking talent.

And that is in the end what makes the Dier or Henderson debate important. It’s not the fact that England must choose between the merits of two worthy but unremarkable footballers, but rather the fact that the choice must now be made.

Whichever way Southgate ultimately goes, and there really isn’t much in it, England will look a better balanced, more mobile and more threatening team with Dier or Henderson in the XI rather than Dier and Henderson.