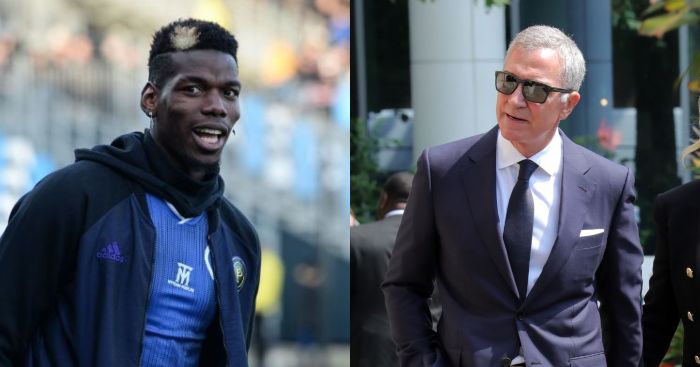 Former Man Utd striker Dimitar Berbatov has compared the words between Graeme Souness and Paul Pogba over the last week to a “Greek tragedy”.

Souness has previously criticised Pogba for “dancing at a wedding”, setting a “bad example” for other Manchester United players and numerous other things.

Man Utd midfielder Pogba admitted last week that he had never heard of Souness when asked about the Scot’s long-term criticism of him.

And when Jamie Carragher playfully goaded Souness about the comments the former Liverpool midfielder told Pogba to “put your medals on the table”.

Barney to be fair I saw the Pogba quote this morning (which was harmless) Graeme didn’t. So I just threw it in to have a joke or put him on the back foot. The ‘show us your medals’ line was him defending himself not having a go at Pogba who has won the WC! It was my fault!! https://t.co/6KXY2niVSy

“I think this is pretty personal now, you can sense it the way these two talk about each other,” Berbatov told Betfair. “I find it all too funny, it’s like a Greek tragedy.

“Back in my early days, even when I was in my later playing days, social media wasn’t so big. It wasn’t like nowadays when players can easily get abused and you can see the opinion of pundits everywhere and it can affect you. We are all humans and we can all say ‘it doesn’t bother you’ but trust me, it does.

“It is necessary for a player to hear an outside opinion, but it must come from someone who has been there and done that, someone credible who knows what they are talking about and what it is like to be a footballer.

“However, some people talk for the sake of talking, so that they get noticed, and that can be irritating and disrespectful.

“With Souness and Pogba, I find it all a little strange, but when someone constantly criticises you, of course you are going to snap.

“Even if it is good criticism, if it is constantly aimed at you and it doesn’t matter what you are doing, at some point you are going to be like: ‘Wait a minute, am I the only player on the f**** planet here?’

“It doesn’t matter who the other person is, you are going to say something back and defend yourself, like what Pogba is doing, it’s normal.

“There were lots of things that used to p*** me off when I played, if I had a bad game or I didn’t score I would look in the newspaper and there would be someone saying s*** things about me.

“You read comments, you hear people talking about you and then, when you have a good game and score a couple of goals, it’s a “coincidence” or it was “against a weak opposition” and stuff like this.

“Of course that gets you thinking, for some people no matter what you do, it is never enough. You try to not pay attention to these things, but it is impossible to do, especially nowadays with social media you are surrounded with opinions.

“It was the same for me and my colleagues, there was always someone that didn’t like us. I have also experienced being a pundit. I liked doing it and maybe I will do it again.

“I always try not to be too judgmental because I have been there and I know how it is, of course I can easily rip into some players and say this, this and this so that it makes for better TV viewings, but I know how difficult it is at times.

“It might not look like a player is putting that much effort in but people don’t see behind the scenes, so I try to be a voice of reason, even when some players probably do deserve a bit more criticism.

“I know that every self-respecting footballer, who wants to grow and develop, will know straight away if they don’t play well and they don’t need anyone to tell them.”