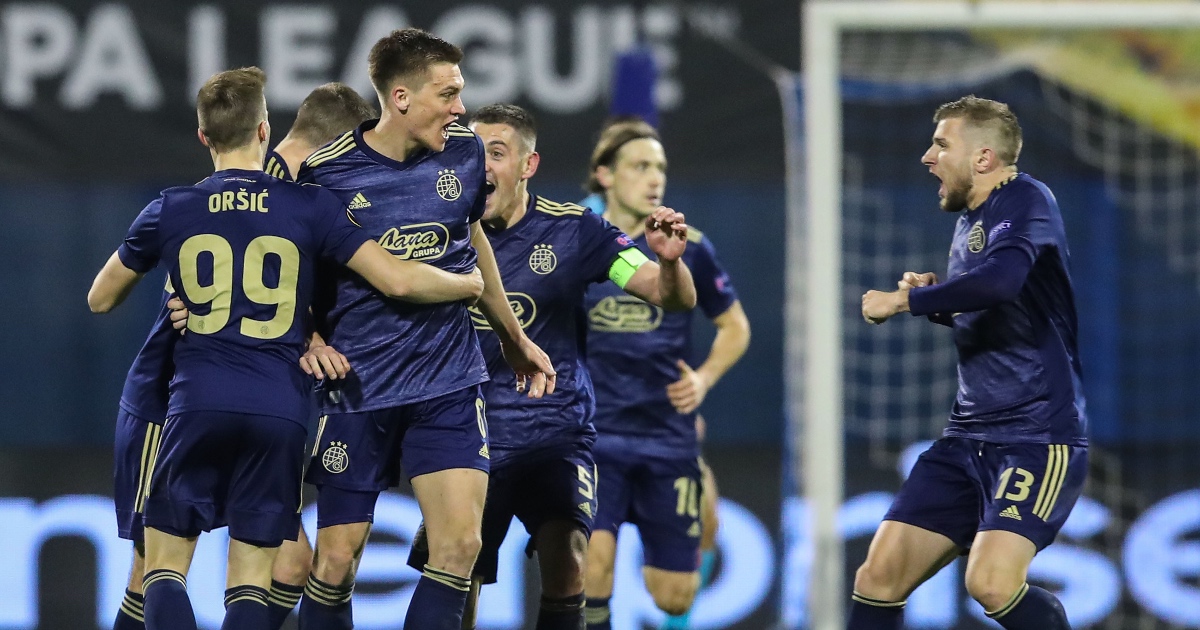 Jose Mourinho was left feeling the pressure as Tottenham were embarrassingly dumped out of the Europa League after a 3-0 loss to Dinamo Zagreb.

Tottenham had one foot in the quarter-finals after last week’s 2-0 first-leg win, but they crumbled in Croatia and succumbed to Mislav Orsic’s sensational hat-trick, going out 3-2 on aggregate after extra-time.

Even at half-time of the second leg it seemed unthinkable that Tottenham would not progress, but Orsic struck twice in the second half to send it to extra-time and then won it with 14 minutes remaining.

What made it even more unbelievable is that Zagreb’s manager Zoran Mamic was sentenced to four-and-a-half years in prison on Monday and was forced to resign.

Spurs’ demise was a different sort of crime and any hopes of silverware this season now rest with a Carabao Cup final against Manchester City next month.

But even winning that might not prove sufficient as their European exit closes one avenue into next season’s Champions League.

Their Premier League form is unlikely to present another as they remain off the pace in the top-four race.

Mourinho insisted before the game that the tie was still open but he cannot have been accounting for what was going to happen.

They lacked intensity and were bereft of any attacking quality as they struggled to create opportunities for a goal that would have killed the tie.

They had fleeting moments, but Dele Alli kicked at fresh air when Harry Kane’s ball sliced open the Zagreb defence, while Erik Lamela had a shot blocked after being played in by Alli.

Spurs were inviting pressure on themselves with their inability to keep the ball and they should have fallen behind in the 34th minute but Lovro Majer failed to hit the target from a good position.

Yet they could have gone into half-time in front as they fashioned their best chance of the match.

A break saw Lucas Moura play in Kane but the striker’s touch was heavy, allowing goalkeeper Dominik Livakovic to come out and block.

Spurs offered no improvement after the break and Dinamo gave themselves hope just after the hour.

It came in style as Orsic picked up the ball on the left-hand side and took advantage of Serge Aurier backing off. He cut inside and curled an unstoppable shot into the top corner.

With the wind in their sails the hosts sensed a second and could have found one, but Kristjan Jakic stabbed over from a corner.

Mourinho sent on Giovani Lo Celso and Tanguy Ndombele and the Argentinian almost made an immediate impact in his first appearance since December, but his deflected shot was saved.

Tottenham have been shocking at defending leads in the Premier League this season so there was an air of inevitably about what happened in the 82nd minute.

The hosts got in down the right and Iyayi Atiemwen pulled it back for Orsic to fire home his second of the night from 10 yards out to level the tie on aggregate.

That finally forced Spurs into action and they almost hit back immediately with their best moment of the night as Gareth Bale’s cross was begging to be converted by Kane at the back post, but the England captain’s header was saved by Livakovic and then cleared off the line.

Orsic’s memorable night climaxed in extra-time as he embarked on a surging run, beating several players and finding the bottom corner.

Spurs tried to respond but Livakovic saved his best two stops for last as he denied Bale and Kane late in extra-time as the Croatians claimed a famous comeback victory.