Home Liverpool News Diouf: I hate Carragher. And Lennon is a d***head 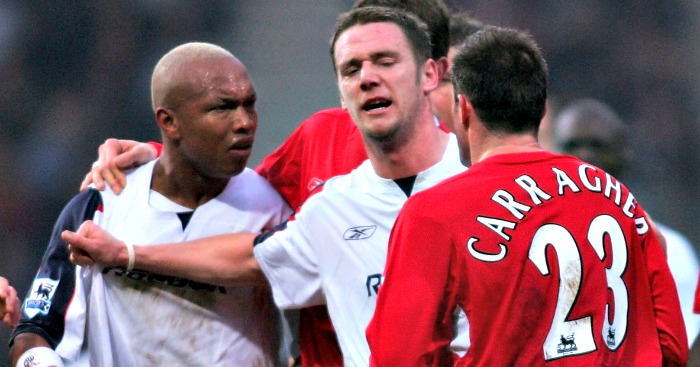 In a typically understated interview with French magazine So Foot, Diouf has targeted Gerrard and Carragher, with whom he played at Liverpool from 2002 to 2005.

Bolton manager Lennon has also been the subject of Diouf’s ire, with the two having clashed previously while Diouf was at Rangers. Lennon was Celtic manager at the time.

“I didn’t know Neil Lennon but saw his face and have always hated him,” Diouf began, with the greatest opening gambit in history. “He was at Celtic and I was at Rangers and the two clubs were at war with each other.

“At the end of the Liverpool-Celtic game in the UEFA Cup he asked me for my shirt but I never gave it to him. I would still not give him it today.”

Diouf then turned his attention to former club team-mates Gerrard and Carragher.

“Steven Gerrard is a great club player but an egotist as well,” the Senegalese said. “He didn’t care about Liverpool winning – all that mattered for him was getting on the scoresheet.

“The person I would least want to spend Christmas with is Jamie Carragher. I hate him.

“He was the biggest turkey I’ve seen on a pitch. I found him useless.”